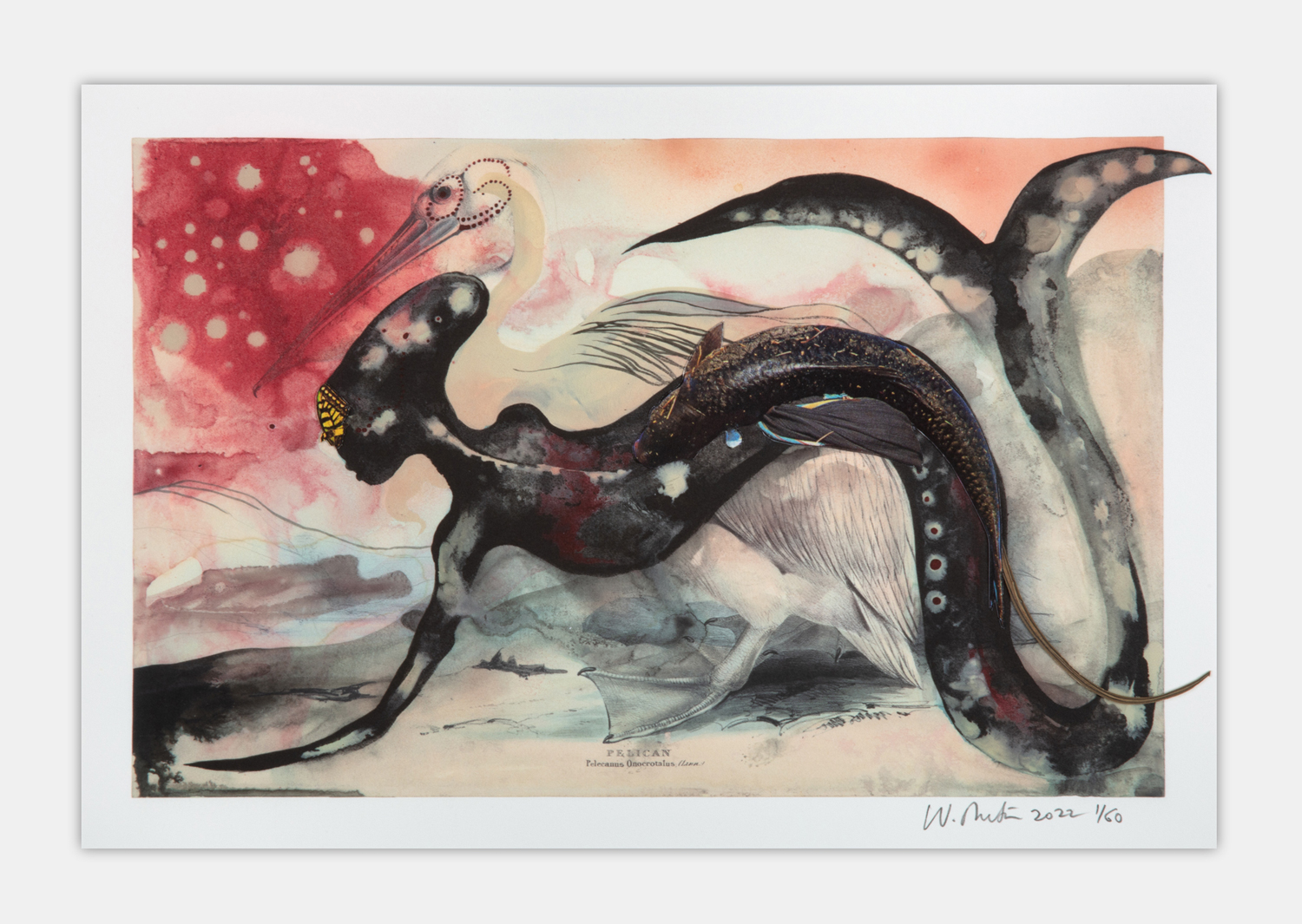 Wangechi Mutu's remarkable body of work touches on such issues as sexuality, ecology, politics, and the rhythms and chaos that govern the world. Her boldly imaginitive paintings, sculptures, and collages, often enriched with culturally-charged materials including tea, synthetic hair, Kenyan soil, feathers and sand, interweave fact with fiction, generating a unique form of myth-making that sets her apart from classical history or popular culture. WaterSpirit washed Pelican employs a found image from a pre-existing pelican illustration which becomes transformed by Mutu’s ingenious interventions.

“Working with older prints and found materials is a kind of archaeography, a re-discovery and re-naming of an image. It's my way to conjure up something from the past that can return to tell me something or remind me what I've forgotten.” —Wangechi Mutu 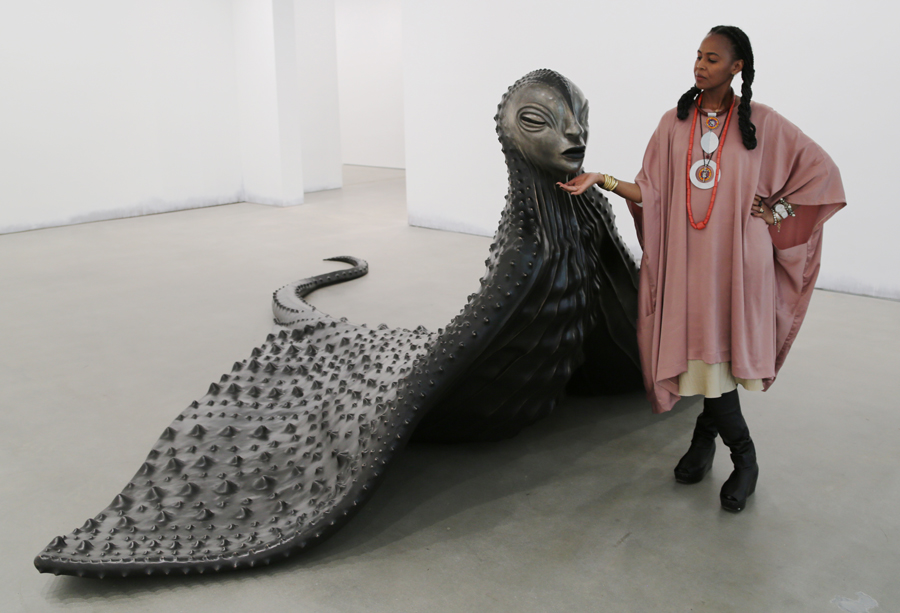 Wangechi Mutu's work deals with the very idea of human representation; how we perceive and reproduce images of what we think we are, how we view others, and create images of what we think of them. In her ongoing conversations with figuration, what Mutu’s work looks at our value systems in Art and beyond, that either obscure or elevate our image and reflections.

Mutu has participated in several major solo exhibitions in institutions worldwide, most recently “Wangechi Mutu” at Storm King Art Center, The Metropolitan Museum of Art “The Façade Commission: Wangechi Mutu, The NewOnes, will free Us” and at The Fine Arts Museums of San Francisco Legion of Honor Museum “Wangechi Mutu: I Am Speaking, Are You listening?”.

Wangechi Mutu and the allure of the water spirit and siren

The Nairobi and New York-based artist’s explorations of Kenyan mythos look to the biologies and ecologies of the Indian Ocean and Swahili Coast, curator Kellie Jones explains

At London’s Victoria Miro Gallery in autumn 2014, Wangechi Mutu presented the show ‘Nguva na Nyoka’, Kiswahili for 'Sirens and Serpents'. Through collage paintings, video and a single sculpture, Mutu explored the character of Nguva, an animal at once real and mythic. The manatee-like sea mammal of the genus Sirenia is known also as dugong, a creature at home in the warm waters of Africa’s east coast.

But Nguva also names a water spirit that is half-fish, half-woman, a sexual temptress and a beautiful singer. Nguva is a rebel who cannot be distinguished from a fully human ‘real’ woman, nor contained by patriarchy. Her mutability, her trans-ness, gives her ‘limitless possibilities’, along with ‘terrifying yet seductive powers’.

In Mutu’s hands, Nguva also holds lessons for understanding our universe and generating empathy in our world writes Kellie Jones, curator and Hans Hofmann Professor of Modern Art in the Departments of Art History & Archaeology and African American and African Diaspora Studies at Columbia University.

Nguva is part of a constellation of African and African Diasporic water spirits. The deity has roots in more ancient guises of a ‘hybrid human-aquatic’ beauty, whose generosity is a sign of good fortune but who is also jealous and deadly, symbolizing the tangled seductions of colonial and modern circuits of global exchange. 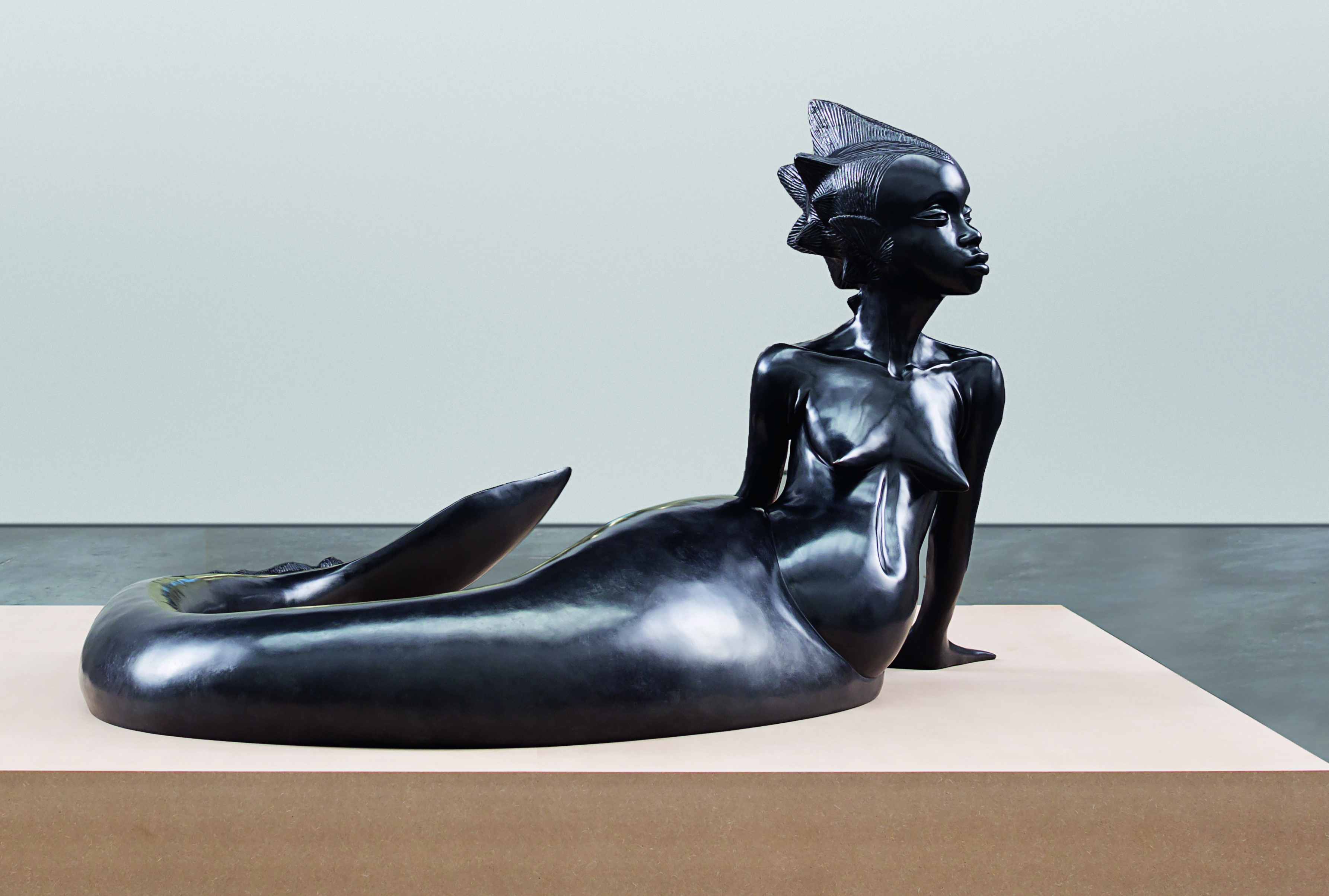 An early twentieth-century Liberian version could easily describe a Mutu collage: ‘a fish body and tail, two human legs, and high-heeled shoes on her feet’, with a luxurious mane of hair.

Jones writes that we see this in Beneath lies the power (2014). Here, the terrestrial beauty emerges from the water, birds alighting on her twiggy hair. Below the water line she rests on a submerged self, a serpent with fins and scales. In The screamer island dreamer (2014), much of the body of another aquatic beast is an enormous vagina, balancing on shapely legs in stilettos that morph into fins.

Nguva might also lurk in Yo Mama, Mutu’s 2004 femme posing with her serpent avatar, and piercing it with her heel. Stilettos as icons of femininity are also easily transformed into weapons against patriarchy, as are women’s pleasure and laughter. 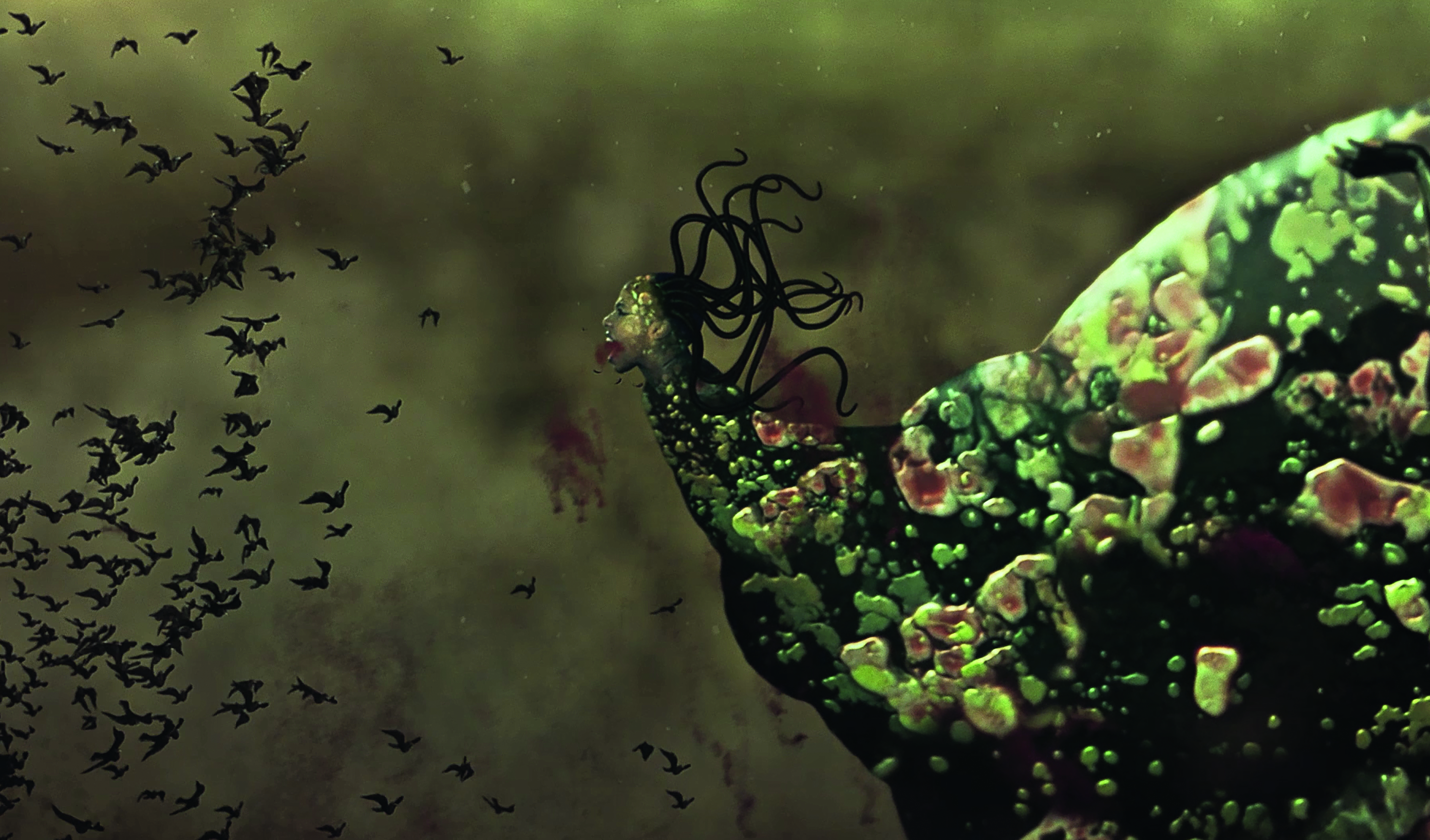 In Nguva na Nyoka, Mutu thinks further about the marine environment and sirens that sound the alarm, not only grounding this particular series but even Mutu’s oeuvre in its entirety. If Mutu warns us about misogyny, cruelty and war, her pieces imagining Nguva also reformulate the emergence of anti-Blackness in the context of slavery.

In Beneath Lies the Power, Mutu’s submerged Nguva is black, painted with the colour of the enslaved on the East African coast; they are figures thrown overboard by slavers or who have made their way to the water and are mythically/ alchemically exacting their revenge.

Several years later, in Water Woman (2017) Nguva, rendered in velvety black bronze, returns to her glamorous aquatic self. ‘As the artist writes of her growing embrace of Nairobi and her eventual return, ‘I began collecting my fragments, my new family, my basket of spells and supplies. I moved towards my father’s unrequited dream, to red soil, black cotton, and petrified roots.” 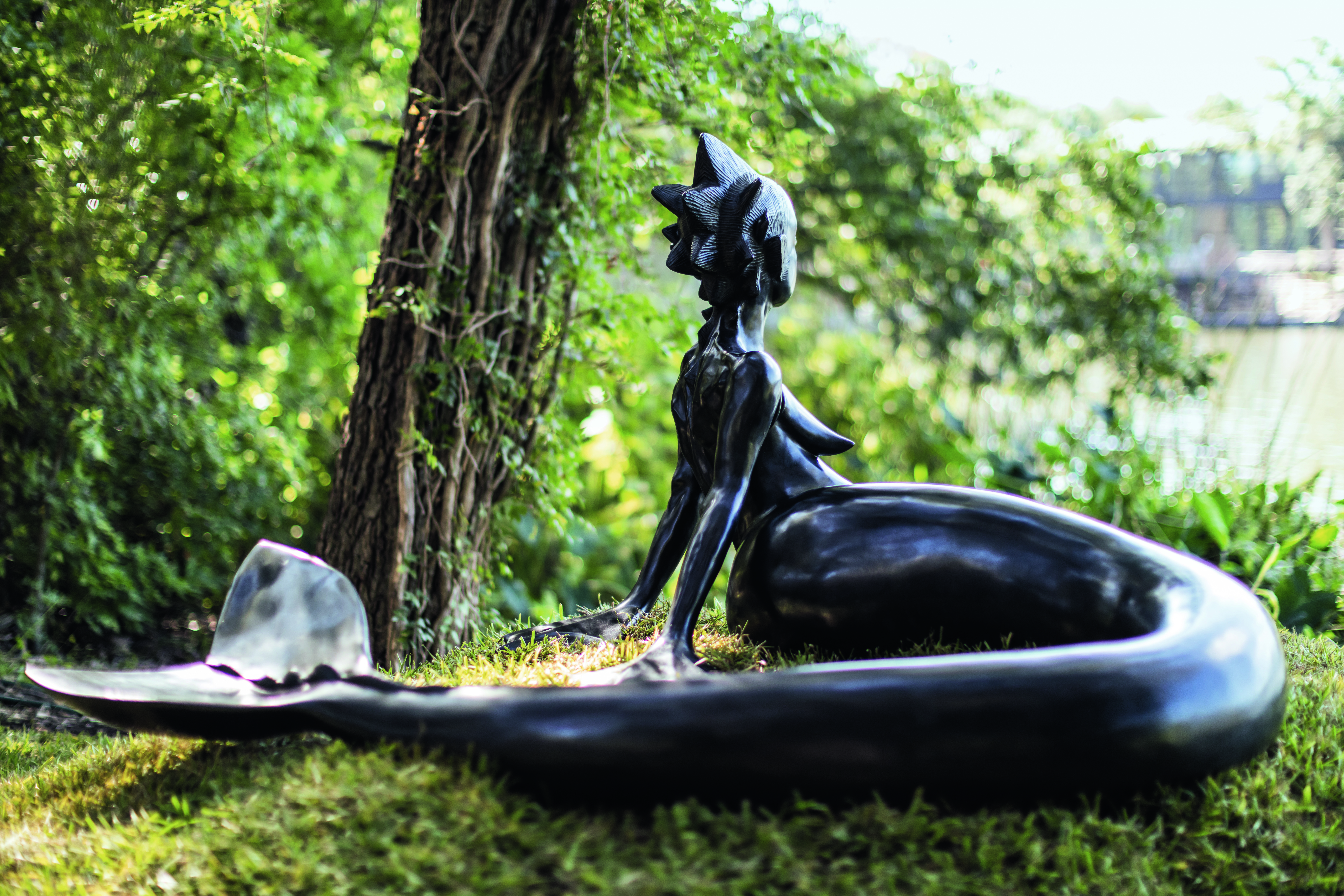