In a career that’s lasted almost 60 years and has seen him take iconic photographs of Winston Churchill, Che Guevera and Pablo Picasso among countless others, we were surprised to learn that one of Magnum photographer René Burri’s fondest memories is of an event he staged in Paris back in 1984 in which his iconic photos were blown up to a huge format for the first time ever accompanied by blaring sound and blazing rockets. It was hard not to notice the glint in his eye as he told us the story in the Phaidon offices a couple of weeks back. He also revealed how that 1984 show, in the Parc de Sceaux just outside Paris, partly inspired his current show in London at the Atlas Gallery.

“For the ‘84 show I made three little slides and asked for them to be enlarged in colour 100 times. And at that time they said ‘we can’t print them up René.’ (Nowadays, of course, we’re able to actually make things wall size or house size). So they printed each part from 360 millimetres to 3 metres sixty. We put them on metal plates and I made two collages with the images: one was on consumption and one was on ecology.

“I included lots of lights and strange gadgets - like (Jean) Tinguely did on some of his mobiles. So the viewer would press a button and lights would come on and also music. And I made these three-minute long collages of images with rockets and a blast off at the end. And at first the director said ‘oh no, this noise is no good! We can’t have it! But by the end it had become a fantastic part of the show. You had this balance kind of thing going on, an illustration in sound. And I remember a woman saying to me, Oh René we’re going to miss this thing!’

“So I took them to another show a couple of months later but nobody could make them work. I had to fly a guy out and it became a mammoth kind of thing. Finally they ended up in a studio in Zurich and we dismantled them and they became collages. I had a dream of selling them to some company but the problem with this kind of illustration – I call them a mega photo mobile – was that you almost needed a mechanic with it! If I had been smarter I would have made mini ones. Nobody would buy them because each thing cost 20,000 Swiss francs just to build! But even now, years later, I would like to put them on the walls somewhere, maybe without the blinking lights and sound. “ 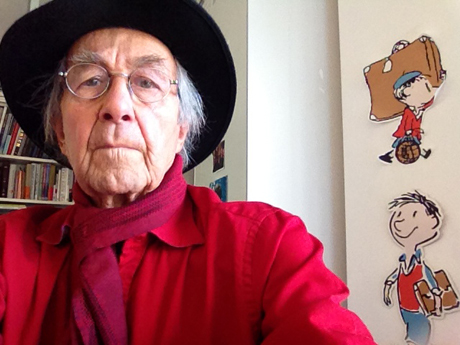 Then recently, Ben (Burdett) from the Atlas gallery called me up and said, ‘I would like to do a big format show with you René’. And he came and he chose seven images, little icons, and said can you print them up? So I had the lab print them. He also had back ups from earlier things from Magnum, and he has done a very nice selection of this with the big prints. In the Parc de Sceaux they were up on poles and they looked very small and then all of a sudden you have them in a gallery or an appartment and they go from here to there (motions floor to ceiling with his hands) and it’s wow!

“It’s funny: 50 years ago photographing Che I could never have imagined that he would stare down at me from a museum wall years in the future. My show has gone for the last six years around 18 museums in south America and Europe and when I go to these places it’s great to see the younger generation have an exchange with a moment that occurred maybe 40 or 50 years ago.

“In a way the pictures have become even more iconic at this size. At the moment I’m having the tendency anyway to limit some of the images and prints I want to have printed or even sold because it’s actually getting more difficult to print up smaller formats. Bigger isn’t always better but some of those icons I never had them in such a size. I painted my appartment and put several up and screwed them onto the wall. They look fantastic – there’s even one in my garden!”

Look out for another mini interview with René in the coming days. And make sure to browse the store where you'll find our great René books. And if you're in London check out Rene's Larger Than Life at The Atlas Gallery.

Known the world over, especially for his iconic images of Che Guevara, Swiss-born René Burri (1933-2014) was one of the greatest humanist photographers. Now, for the first time ever and featuring countless previously unpublished images, Burri's remarkable and adventurous work is brought together in this career retrospective of over 400 duotone photographs.

Edited and compiled by the distinguished writer Hans-Michael Koetzle, in close collaboration with Burri, this unprecedented retrospective is a historic book of the major political events and key personalities of the twentieth century - as seen through the eyes of one photographer.

Nothing like this book on Burri has ever been published before, and it is a real coup for Phaidon to be the first to publish his entire career's work.

A member of the prestigious Magnum photo agency, Burri is a photographer whose curiosity and humanity as a photographer have afforded him almost unrestricted access to the major events and personalities of the last 50 years. In this way, René Burri Photographs is a fascinating personal account of the major artists, politicians and personalities that Burri has made a part of his life. First achieving international recognition with the seminal photography book on post-World War II Germany Die Deutschen in 1962, Burri has since become one of the most important figures in the history of photography: he is universally revered by his peers for his sympathetic eye and his capacity to capture larger-than-life personalities on film.

René Burri Photographs comprises the culmination of years of scholarly research by distinguished writer Hans Michael Koetzle into Burri's important contribution to reportage photography, resulting in an incisive introduction, a series of in-depth essays at the beginning of each chapter and in extended captions that accompany each image. The book is designed by prominent Swiss graphic designer Werner Jeker of ADN Design, Lausanne.

In 21 thematically-organized chapters, we accompany Burri across Europe to the Middle East, Vietnam, Brazil, Cuba and beyond; we visit Picasso, Le Corbusier, Yves Klein and Giacometti in their studios; we witness political figures such as Che Guevara in repose, and Fidel Castro at the helm. A work of epic scope in its own right, this book is a magnificent tour de force.

Hans-Michael Koetzle is a writer, photography critic and curator of several internationally acclaimed exhibitions. He is also the editor in chief of the award-winning magazine Leica World, and the author of numerous books and articles on the history and aesthetics of photography. Koetzle currently lives and works in Munich.

"Burri said that ‘pictures are like taxis during rush hour – if you’re not fast enough someone else will get them first.’ What emerges from this magnificent book is just how often Burri did get the pictures first, and in a career which has spanned over 7 decades this is truly remarkable."—Modern Painters

"In addition to his obvious agility and feel for light, Burri managed to invest his images with a dynamic depth that gave them an almost palpable third dimension."—Joanna Pitman

"The hefty price of this hardback is entirely justified by the sheer number of superb photographs, good-quality reproduction and mass of information on Burri himself. An excellent collection."—Amateur Photographer

"A historical document of the second half of the 20th century. Its key events are witnessed, its significant players – Churchill, Sadat, Picasso, Mao, Kennedy – recorded for posterity, and all undertaken with enormous humanity, humility, and skill."—Gordon Miller, eight photojournalism

"The book is cleverly designed, having the feel of a catalogue, but the permanence of something more special. It is a testament to Burri that, after nearly 500 pages, the reader is left wanting more, and knowing that what has been revealed is only a glimpse."—Micheal Cockerham, Royal Photographic Society Journal

"Photographer René Burri captured icons like Picasso and Che Guevara for more than 50 years... It’s books like this that make your Avedon all too predictable."—Esquire

"It would be difficult for young photographers today to recreate the career of René Burri, who came of age in the 1950s—when being a generalist was considered a sign of artistic strength. In a career spanning more than 50 years and several genres, he has covered wars, revolutions and all manner of political upheaval; shot street scenes of his beloved Paris and other world capitals…His new book, René Burri Photographs, brings much of this impressive work into a single volume, creating a memorable portrait of the second half of the twentieth century."—Metropolis

"On the ample evidence here (Che Guevera, cigar confidently erect, is just one of many spirited shots), this is photojournalism at its most artful, full of intelligence, feeling, and graphic punch, the last given maximum impact by the book’s knockout design."—Photograph

"Why René Burri isn’t quite a household name (like fellow Magnum photog Cartier-Bresson) is a bit of a mystery... René Burri Photographs by Hans-Michael Koetzle is practically a pictorial history of the mid-20th century. Highly recommended."—Popular Photography & Imaging

"Though not the first book on this photographer, this is the lengthiest treatment to date, documenting a 50-year photojournalistic career with more than 400 duotone images. Together with Burri, Koetzle has unearthed the famous and the rare from Burri’s archive, which results in a commingling of the tragic, the ordinary, and the celebrity in 21 geographically oriented chapters."—Library Journal

"This is a timely volume, a lifetime retrospective with an excellent text by the photo-historian Hans-Michael Koetzle, and about 500 of the Swiss photographer’s pictures. It pleases because of the quality of the images, because of the intelligent and informative text, because of the spirit with which Burri’s beautifully composed work inhabits the books."—Art on Paper

"Over 400 duotones fill this sumptuous volume, effectively reminding us of the work we have taken for granted for so long."—PhotoEye

More on The René Burri Interviews #4 Bigger is better! 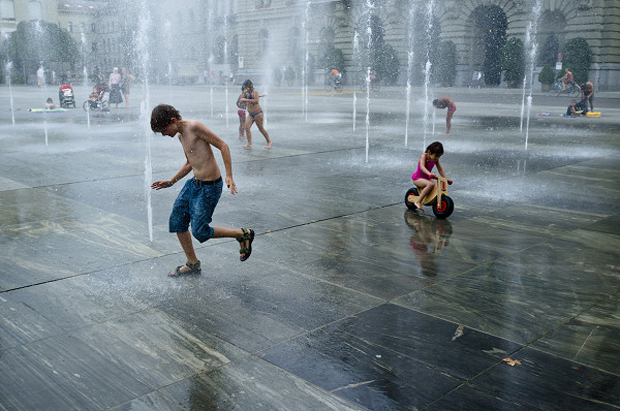