How a Japanese food stylist turned baking and cute doggie photos into a fun, tasty title

When, nine years ago, the Japanese food stylist and baker Natsuko Kuwahara took in a stray, three-month-old dog, little did she know that the animal would help her to create a fun, runaway hit book.

So Kuwahara, a renowned cookery expert and skilled photographer who works for a wide range of prominent magazines, advertising agencies and publishers, had been pining for a pet when she saw this mongrel on the Satoya Boshu animal fostering site. She and her husband adopted the dog, naming her Kipple, inspired by Mr Techie & Miss Kipple, a 1984 solo album by Hajime Tachibana, guitarist and vocalist for Japanese band The Plastics. 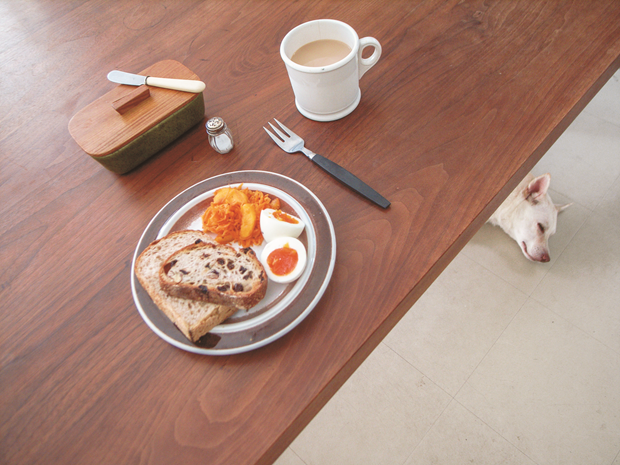 Multigrain bread, carrot and kaki (Japanese persimmon) salad, boiled egg, café au lait, and a dog. I should really cut back on the carbs … zzzzz. From Bread and a Dog

Kipple soon found her place within Kuwahara’s home in the Tokyo suburbs, even if she didn’t quite understand her place within the domestic food chain. Whenever Natsuko prepared herself a pleasant breakfast, lunch, bready snack, or baked dish for a photo shoot, the dog's hopeful snout would appear beside her table.

Kuwahara began photographing her greedy little pet, posting the images on social media, alongside a description of the dish and a fun stab at her dog’s likely thoughts and intentions. Surprised by the great response from friends and readers, Kuwahara decided this winning series of a winsome animal and a carefully prepared meal needed to be set down in print. 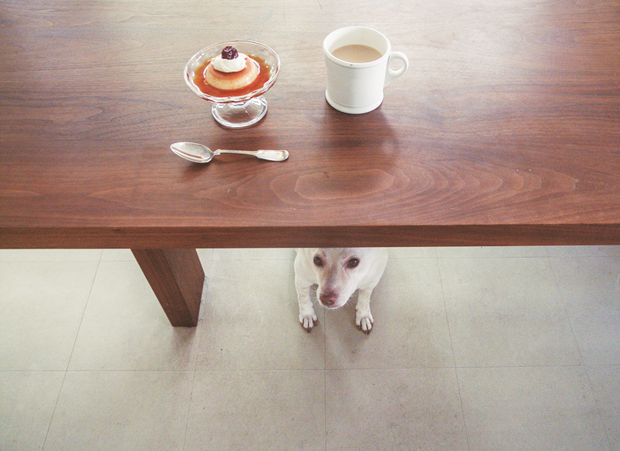 Crème caramel with whipped cream, a sour cherry, milky tea, and a dog. Can I try some? From Bread and a Dog

Hence Bread and a Dog, a heart-warming record of the food Kuwahara has baked for herself, and the lengths her dog Kipple has gone to, in order to get a taste for herself.

As well as featuring lots of tasty dishes, the book capitalises on our twin enthusiasms for the sharing of both food - and pet - pictures on social media. 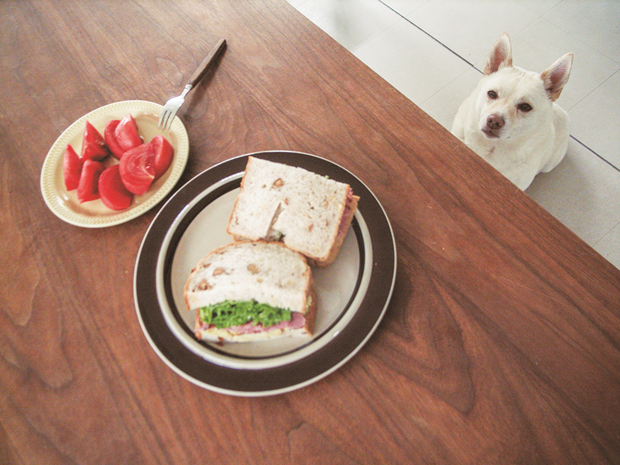 Pastrami and arugula (rocket) sandwich made with freshly baked multigrain bread, tomato wedges, and a dog. I can go for that. From Bread and a Dog

There are shots of Kipple eyeing up bread pudding, cinnamon rolls, muffins, sandwiches and bagels, as well a the occasional image of the dog rebuffing less canine-friendly food, such as pickles and fruit.

Each image is wittily captioned, with a clear description of the meal, and a cheeky line on behalf of the dog. The book’s 100 artfully composed photographs capture every dish perfectly, as well as a dog and owner’s relationship, while also serving as an engaging culinary log. 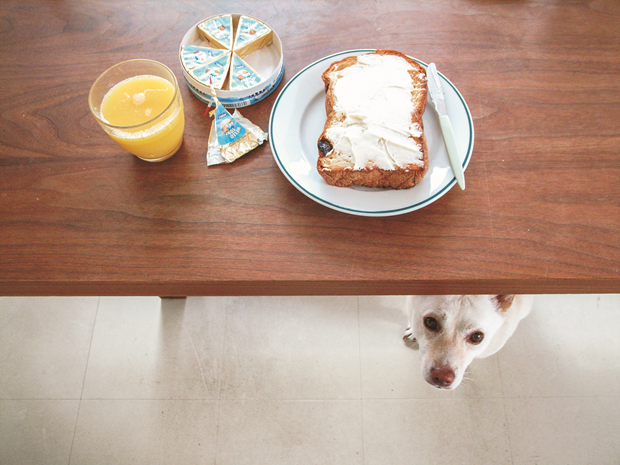 Cream cheese on fig bread baked in the bread maker, orange juice, and a dog that has become a permanent fixture under the table. Hey, be nice. From Bread and a Dog

In the process, Bread and a Dog offers surprising insight into Japan’s bread and baking traditions. And aside from the charming photographs of Kipple begging for treats, (and some of Kuwahara's cat Kuro too) the book also includes a wide selection of recipes, from distinctly Japanese refreshments like ume juice and amazake, through to simpler confections like French toast and layer cake, by way of a few bread-free dishes, including great carrot salad and clafoutis with plums. 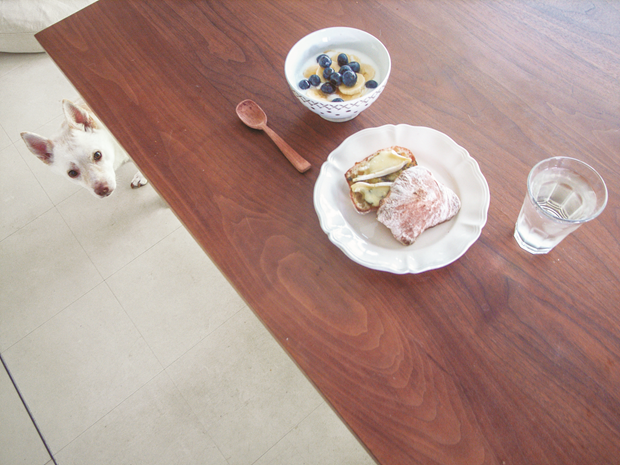 An experimental hot ciabatta sandwich with basil and Camembert, yogurt with bananas and blueberries, elderflower drink, and a dog. You called? From Bread and a Dog

The soft-backed title is a delightfully easy read, likely to appeal to fans of Japanese popular culture, animal lovers and culinary enthusiasts alike. After the first thirty pages, we think even the most casual readers will begin to side with Kipple, given the tastiness of the treats on offer. You can pre-order Bread and a Dog here, and check back soon for more on this fun new title. 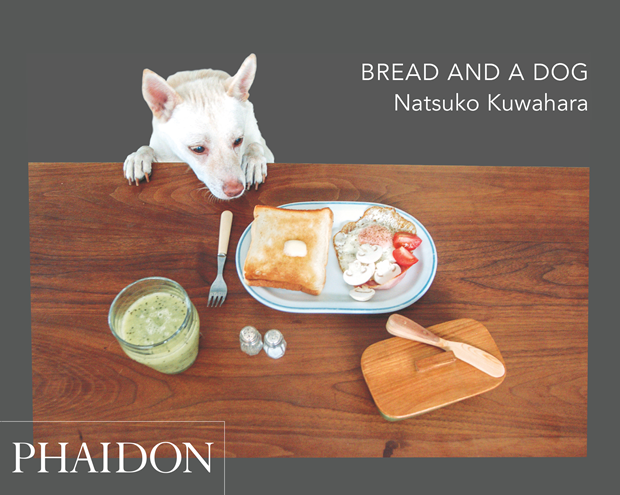 Bread and a Dog

Bread and a Dog : Natsuko Kuwahara

Curiosity. Longing. Hunger. Bread and a Dog is a quirky photographic journey into the psychic trauma of living with a professional food stylist... as a dog. Japanese food stylist Kuwahar Natsuko photographs her breakfast, laid out every morning, in beautifully arranged aerial tableaus with an unexpected twist, her omnipresent, exceptionally well-trained dog. Through 100 photographs, readers will delight not only in Natsuko's delicious meals served on beautiful dishes, glassware and flatware, but in the dog's enthrallment with what is happening on the table above him.

Presented as a sequence of photographs, the book concludes with recipes for each breakfast, and tips and tricks on food photography from Natsuko herself.

A perfect gift for animal lovers.

Features:
– Recipes and tips for successful and stylish breakfasts from the author, a professional food stylist.
– 100 charming photographs of an adorable dog taken from a refreshing and relatable point of view. Perfect gift or impulse buy for animal or food lovers.

Natsuko Kuwahara is a Japanese food stylist. She started her career as a cook in a bakery kitchen. She turned freelance as a food stylist in 2004. Her recipes and her natural table styling has become popular in magazines, and now she is active in magazines, books and advertisements.

"Pets plus food plus the internet is an unfailingly successful trifecta, but with Kuwahara’s uniquely Japanese combo of sparseness and whimsy this is something special."—The Guardian Cook

"Is this the best food gift of the year?... An equally great gift for Nipponophiles, foodies and animal-lovers, but dog’s best friends, in particular, are going to flip."—SBS Food

Is there a serious message behind Bread and a Dog?