The artist explains how a sexual slur, and two separate protest movements informed his MoMA installation, Who Is Queen?

There’s no royalty in the USA, although Adam Pendleton is about as close to a young prince as anyone gets in the US artworld. Born in 1984 in Richmond, Virginia, he graduated from high school two years early, and studied in Italy before moving to New York at the age of eighteen, intent on becoming an artist. Succeeding remarkably quickly, Pendleton gained a reputation for visually arresting works, often filled with words that weren’t easily reconciled.

Though the art he produces is largely black-and-white, Pendleton instils everything with gradations, forcing viewers to rethink the way they might approach a simple line of text, canvas or video clip. 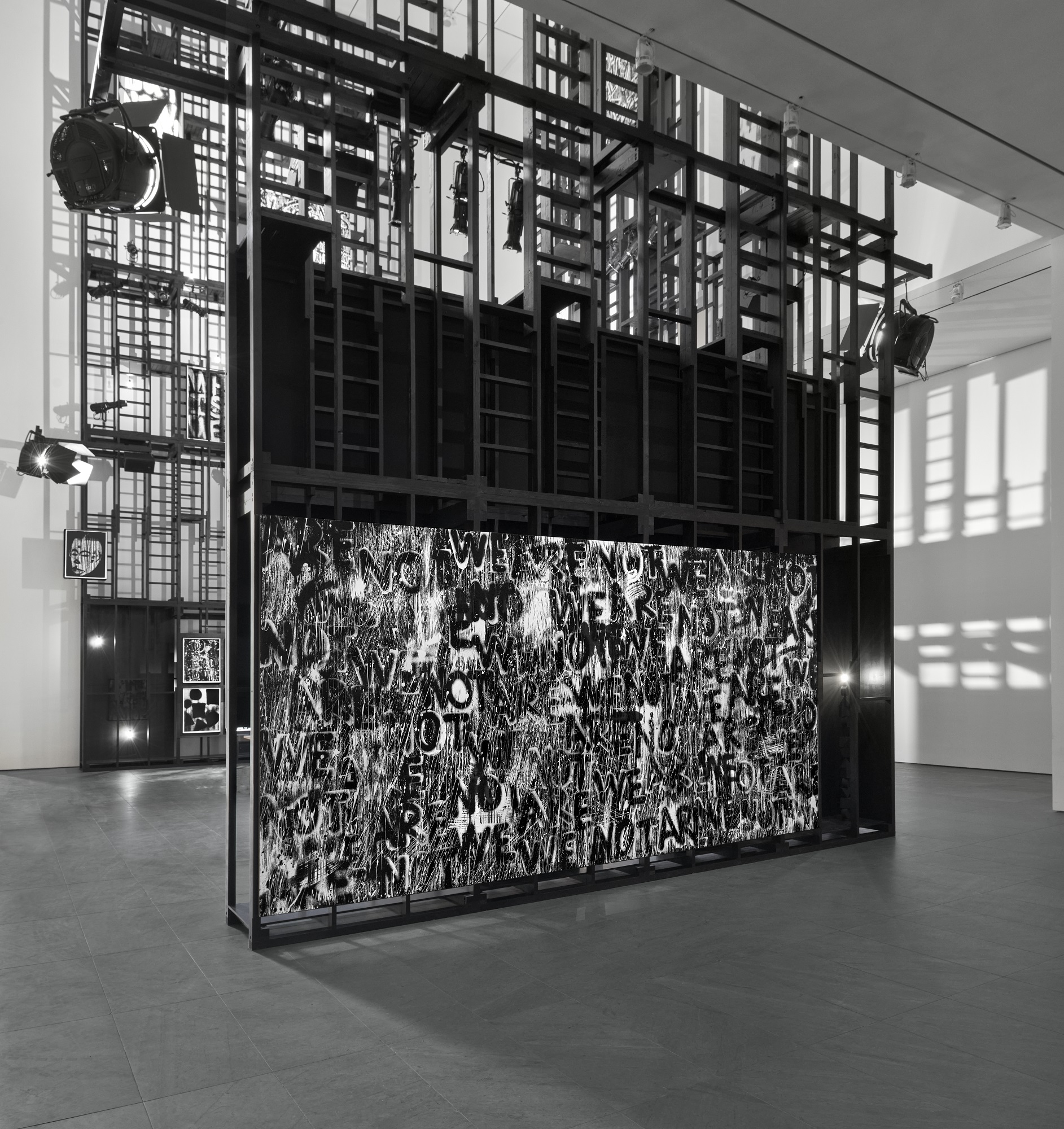 His latest exhibition, Who Is Queen?, which just opened at New York’s Museum of Modern Art, uses the same materials and processes to examine, in part, the balance of power in the US. As the artist explained in a recent interview with Artspace, “Who Is Queen? is a large-scale multimedia exhibition that fills the height of MoMA’s atrium. Three towers made of wooden scaffolding act as armatures for various works, including paintings, works on Mylar, sculptures, and a continuously modified sound collage that combines archival and newly commissioned audio. “My most recent series of paintings will be featured.” 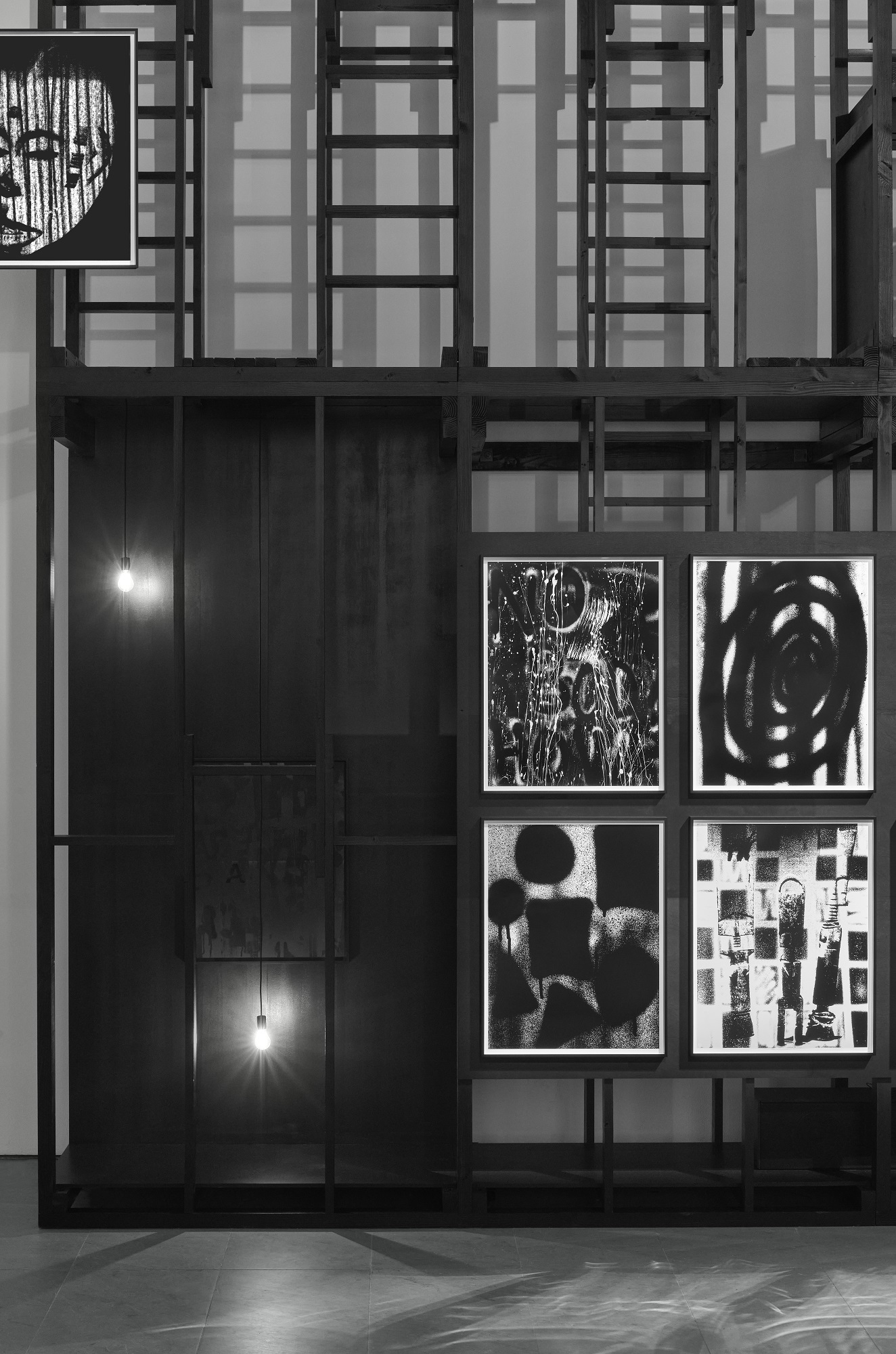 Though the title may make some think of monarchical struggles, Pendleton was himself inspired by more recent political movements, closer to home: Occupy and Black Lives Matter. “Among other things, they prompt us to re-evaluate the fabric of America,” he told Artspace, “to pose the question—and not for the first time—of what kinds of collectivity and what kinds of life are possible in this country. This involves both utopian and dystopian thinking, and a reckoning with historical possibility. What makes these movements different from historical upheavals, both in terms of politics and aesthetics? How do they—perhaps unexpectedly—align? I suppose I am, as an artist, most interested in the formal problems that the discourses around such protests introduce. I am bringing them into a space of abstraction, and part of what this project is about is the tension created in that translation. 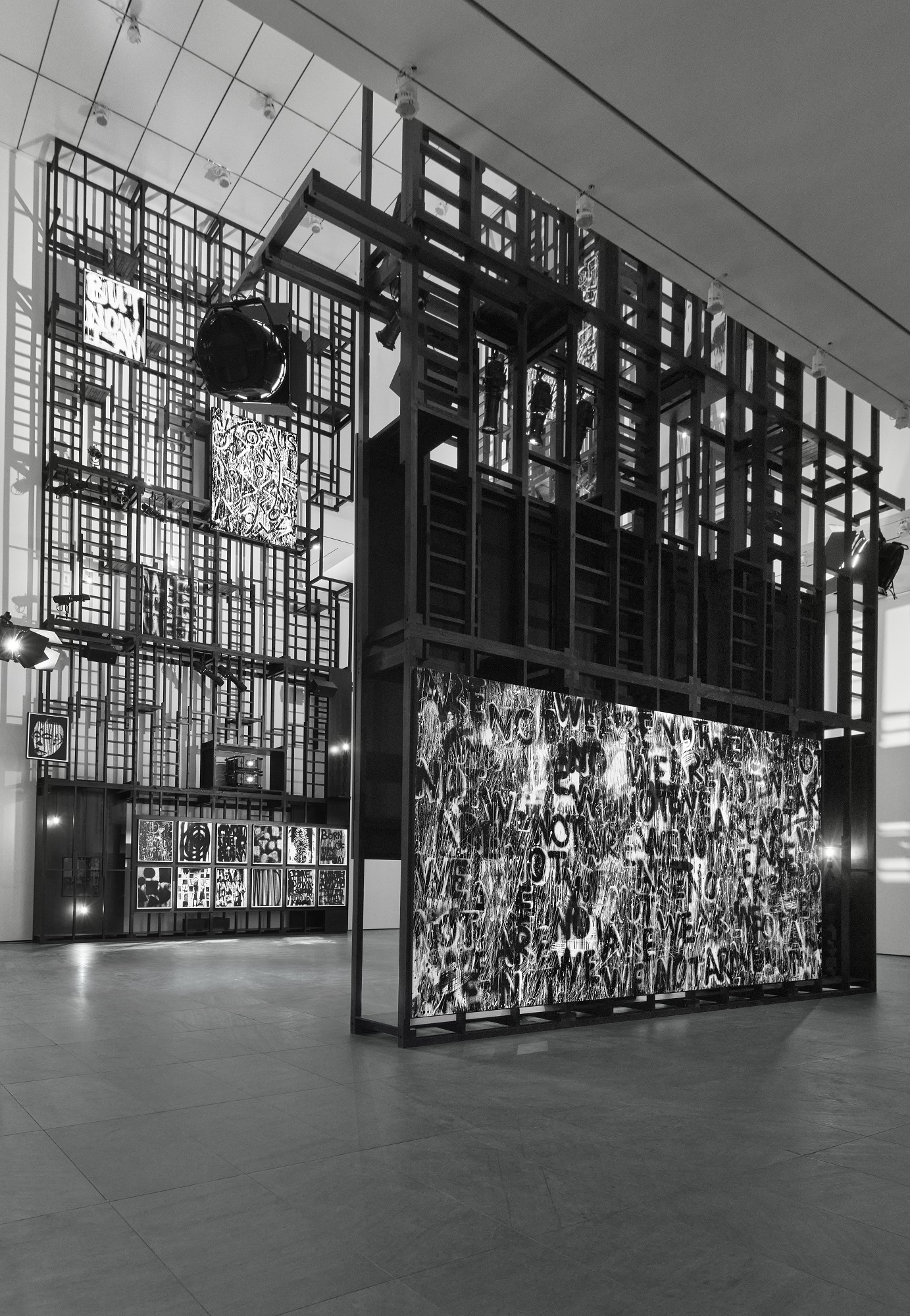 Of course, Pendleton, as a gay black man, will have come across ‘queen’ as a sexual slur, rather than a regal distinction. As a recent New York Times profile explained, the expression, “you’re such a queen” was once tossed at him in a way that got under his skin.

“It was a fleeting moment in conversation, he said, but it raised ‘this idea that someone else can name you or claim you, and the vulnerability that comes with that.’” he explained to the NY Times. “The project, he said, “is probably my most deeply autobiographical work to date.” 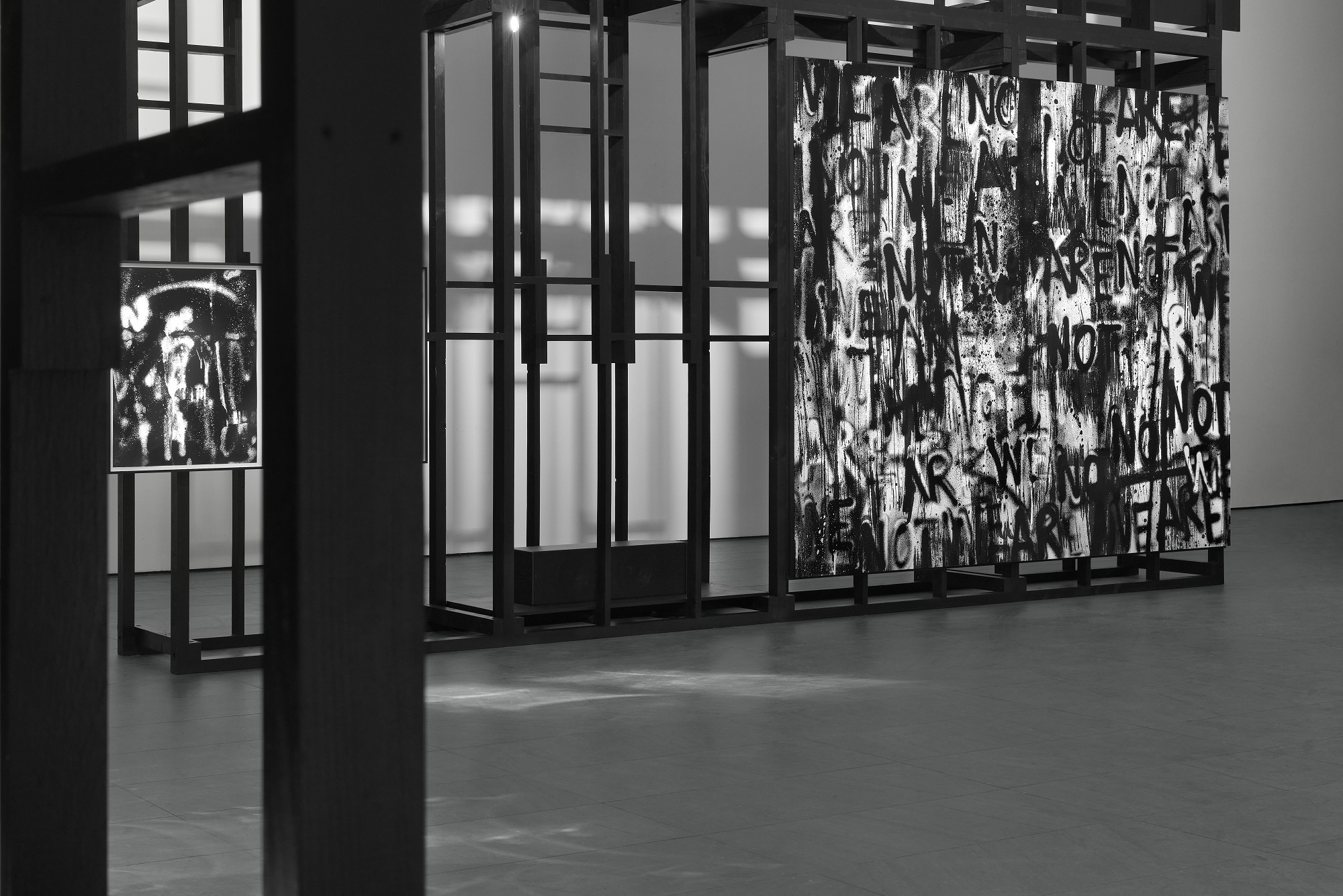 Despite this, Pendleton allows that the exhibition is broader than his own personal concerns, and takes on American society's direction more wholly, questioning where it is headed and how it can continue to be constrained by narrow identities.

Pendleton doesn’t offer any clear labels to take their place; instead Who Is Queen? channels a concord (or should that be cacophony?) of different points of view. “I think of the We Are Not paintings, which layer the spray-painted titular phrase, “WE ARE NOT,” as pertinent here,” he told Artspace. “As this phrase struggles to enunciate or even seems to refuse a collective subjecthood—“WE”—this struggle is itself constitutive of subjectivities-in-process: a chorus of voices.” 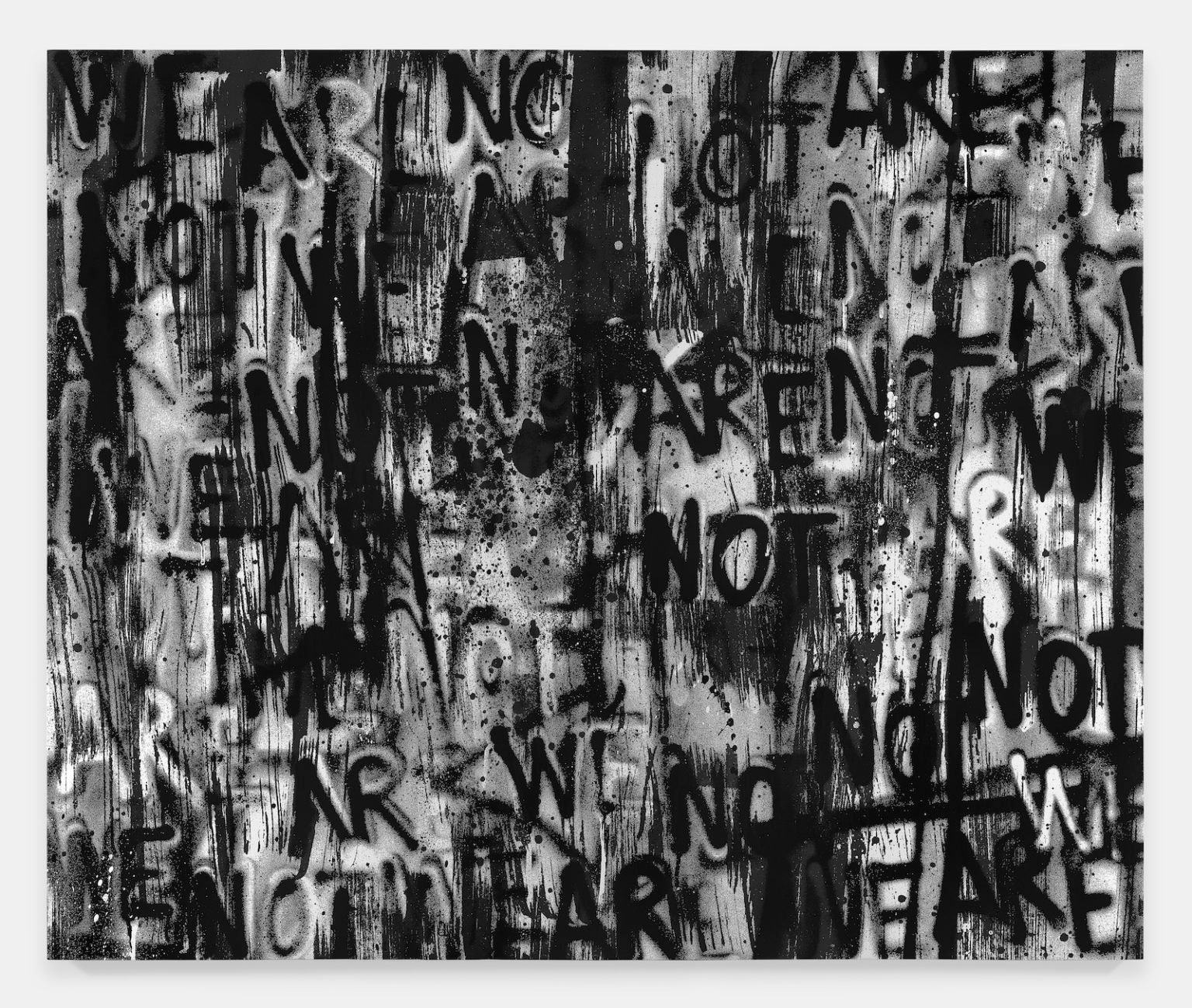 To better understand that chorus and this important contemporary artist, order a copy of our Adam Pendleton monograph. It is the first encompassing publication on the work of Pendleton, one of the most formally inventive and conceptually rigorous American artists working today. You can get a copy here. 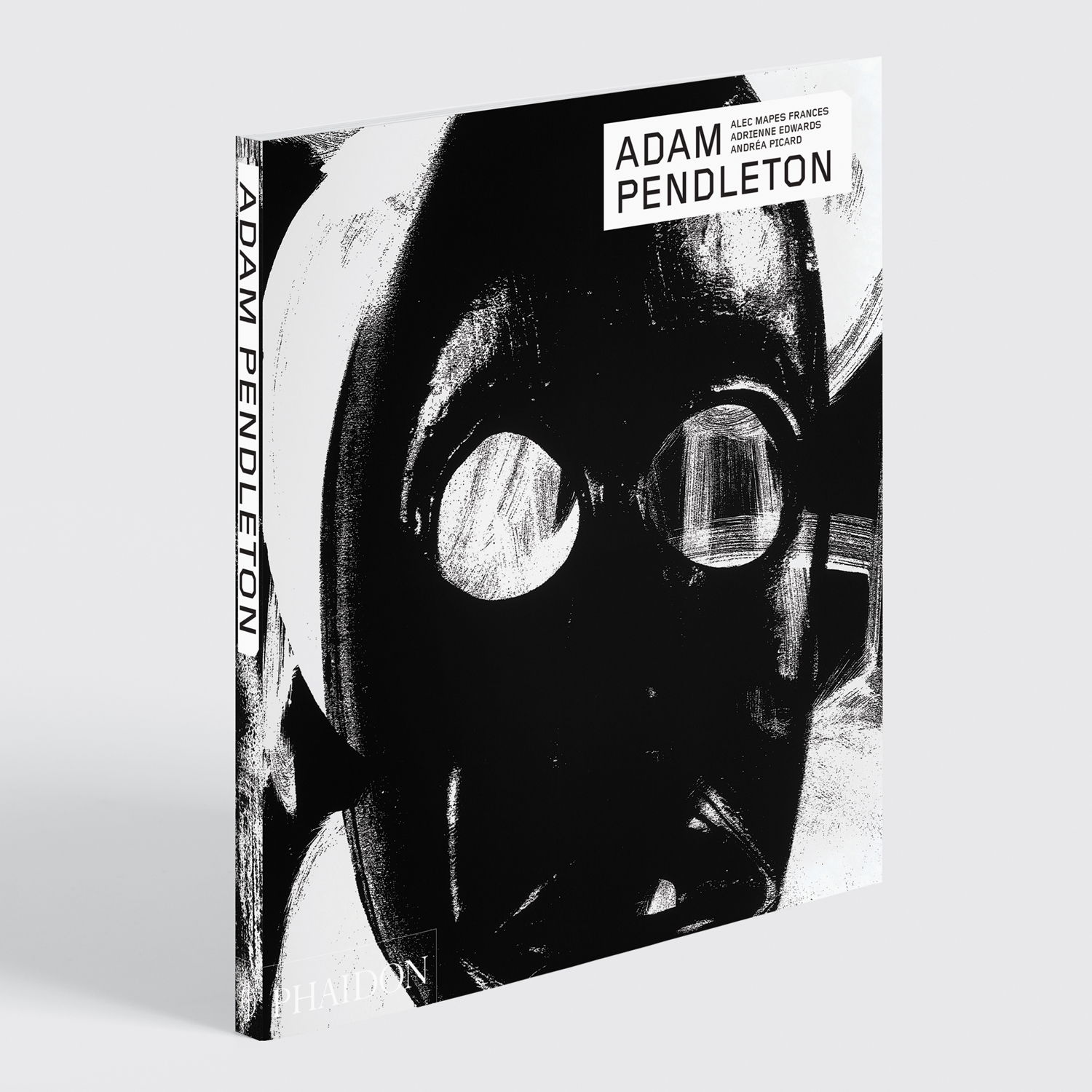