Ahead of their Guggenheim retrospective, we explore the sincere amateurism at play in this duo’s art

Does an artist have to be careerist in order to receive a Guggenheim career retrospective? Not in the case of Peter Fischli and David Weiss. The Swiss duo remained deeply amateurish throughout their lengthy partnership, as visitors to the New York institution can see, February 5 - April 27, when over three hundred sculptures, photographs, videos, and installations will go on display, in the most complete overview of the artists' work to date.

Weiss passed away in 2012, yet Fischli helped install the show, keen to ensure, as he told the New York Times, that tee arrangement of certain works "did not create too much meaning."

There is, at least, consistancy in this silliness.  The pair lampooned art-world scheming in their first film, The Point of Least Resistance, dressing up as a panda bear and a rat, roaming around LA, intent on making their fortune via the gallery system.

Even the name of the 2016 Guggenheim's retrospective, How to Work Better, underscores the ironic disdain the pair had for hard graft. This is also the name of a daft ten-point motivational sign the artists found in a Thai factory and turned into a mural; New York's Public Art Fund plan to unveil a recreation of the work on the corner of Houston and Mott Street in Manhattan tomorrow, February 5. 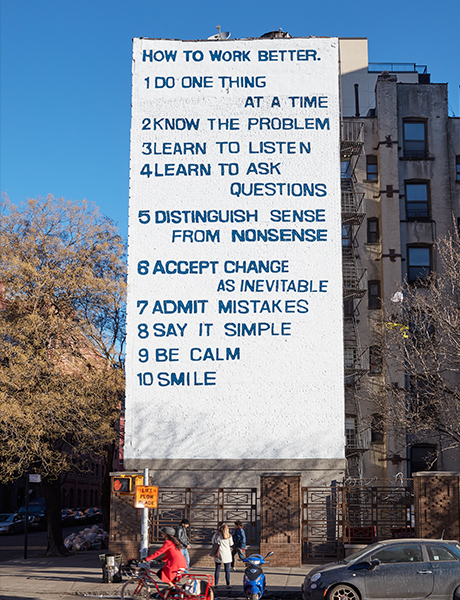 How to Work Better (2016) by Fischli and Weiss. Rendering courtesy of Public Art Fund

Yet, why should we admire such wilful amateurism, when we prize keen skillfulness in other artists? Perhaps, as the German writer and curator Robert Fleck puts it in our Fischli and Weiss monograph, because in their cosmically bumbling art they articulate something human and universal.

"Fischli and Weiss do not try to create art that reflects the expectations and ideas of the masses. It is the examination of the non-ambitious amateur aesthetic that is the important theme in their works," writes Fleck in our book. "They keep a sharp eye on the humble amateur in order to approach the phenomenon of the visual cliché in the present day, and to create a major metaphor about the power and fascination of contemporary images." 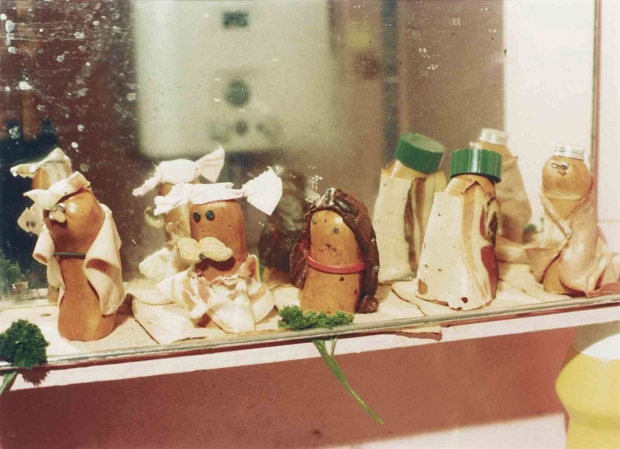 Sausage Fashion Show (1979) from Sausage Series, by Fischli and Weiss. As reproduced in our monograph.

Consider the artists Sausage Series, a set of ten photographs shot in 1979, wherein the artists rearranged the meaty snacks and accompanying condiments into a silly set of dioramas, including a fashion show and a carpet shop. The works are fun, and, from a technical point of view, actually quite good, yet the wursts and slices of luncheon meat never quite transcend their lowly status. And quite rightly so, as Fleck puts it, "these works reflect upon the act of making ephemeral sculptures and symbolic objects from the materials of the everyday."

There a similar look and feel to Suddenly This Overview, a series of lumpy, unfired clay renderings of what Fischli and Wiess consider to be important moments in history. Look out for the Swiss chemist Abert Hoffman riding his bicycle while enjoying the world's first LSD trip, and "Mick Jagger and Brian Jones going home satisfied after composing 'I can't Get No Satisfaction'" as the artists put it. 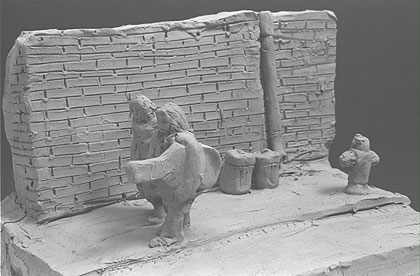 Nevermind that the fire hydrant in the Jagger and Jones scene is American not British, or that Satisfaction was actually written by Mick and Keith Richards. The amateurism is part of the allure.

"These pieces seem to have been made in an attic by a solitary weekend sculptor, who has transformed scenes of banal or mediatized everyday life into the profoundest pleasures," Fleck writes. "It is precisely this unbridled delight in art that consistently comes through in Fischli and Weiss work."

This simple delight is present too, in the pair's best-known work, The Way Things Go. This 29 minute film, created in 1987, sees the artists assemble a wide range of simple objects in their studio into a kind of kinetic sculpture, partway between a Rube Goldberg or W Heath Robinson illustration and a domino show.

"The objects appear to act autonomously," Fleck explains. "The ongoing chapter of accidents caused by the fact that no human hand interrupts the process makes viewers laugh, but it also raises open-ended questions about the world at large. At the centre of the film is a profound reflection on sculpture, on physical laws, on the world of objects and the idea of the catastrophic chain reaction. It is a kind of comedy of objects."

Indeed, it is for this work above all others that the late US critic Arthur Danto concludes, in the Focus section of monograph, that, "Play is the defining quality of Fischli and Weiss art. Only artists who retrain a closeness to childhood would have dreamt it up and made it happen."

Read more about the artists in our authoritative monograph; and if you like their work, take a look at the pieces available on Artspace.