How Ugo Rondinone re-invents life, love, experience, identity and even time and space itself around him

In 2002 the Swiss-born contemporary artist Ugo Rondinone bought an olive orchard in the countryside surrounding Matera, in Southern Italy. He picked that spot, thousands of miles from his home in New York, thanks, in part, to his roots. Rondinone’s parents came from this ancient cave-filled city, one of the oldest, continually inhabited settlements in the world. But Rondinone also appreciated how the trees in Matera captured this long passage of time. Shortly after buying the land, he began to create sculptures, casting the olive trunks to make works that, as the artist explains to the American curator Laura Hoptman in his new Phaidon Contemporary Artists Series monograph, “become a memory of condensed time.”

“Through a cast olive tree, you not only experience the lapse of real time, but also a differently calibrated temporality,” the artist explains. “Time can be experienced through these trees as a lived abstraction, because their shapes are formed by the accumulation of time and wind force.” 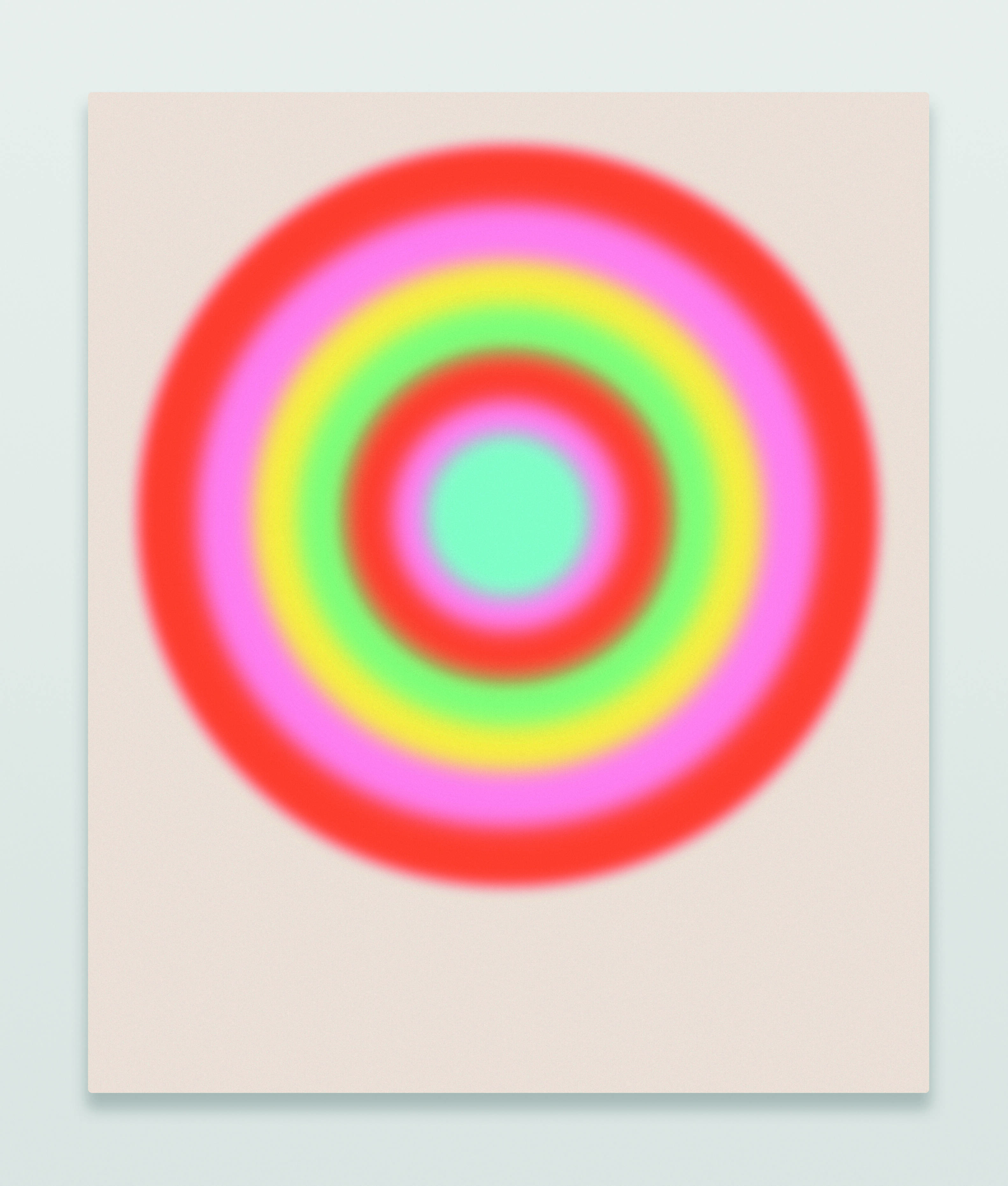 The incredibly slow passage of time, as seen in an olive tree, and the fleeting moments of human experience are key motifs in Rondinone’s hugely varied body of work. Rondinone paints, sculpts, creates films, photographs, installations and works of land art, yet in each work he draws the view back to his central concern: the human condition and its place in space and time.

“I see the world as a mysterious place where appearances are deceptive and ultimate reality is rarely perceived. A world where each individual creates its own time and space," he says. "It’s a paradox. On one side we experience time and space as reliable and predictable entities, where time and space present us with a deceptive form of reality. But the inner life of time and space is gloomy, labyrinthine and perilous.” 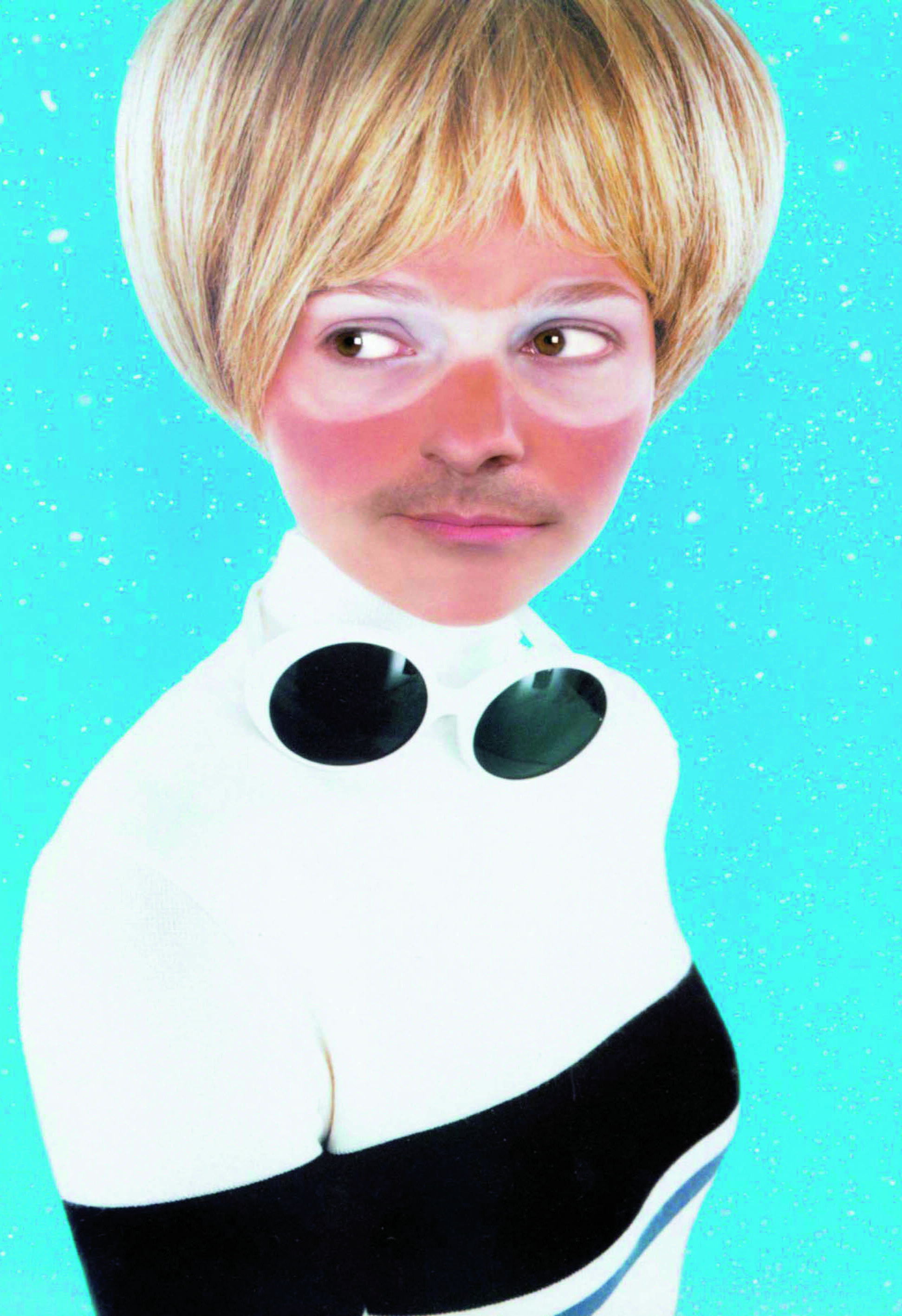 That labyrinthine gloom is best expressed in the artist’s early landscape sketches, executed in the late 1980s, shortly after Rondinone’s boyfriend, a young chemistry student called Manfred Weisner, succumbed to AIDS. The pair had both been studying in Vienna, and it was Weisner’s passing that shifted Rondinone’s outlook. “Manfred’s death was a turning point in my life, when I decided to make the most of what time remained for me,” the artist says. “In the middle of the AIDS crisis at the end of 1988, I turned away from grief and found a spiritual roadmap for solace, regeneration and inspiration in nature. In nature, you enter a space where the sacred and profane, the mystical and the mundane, vibrate against one another. This new base found in nature would inform my work for the next thirty-three years.”

Those early sketches, inspired in part by the German Romantic poet Goethe’s travel sketches of Vienna’s Prater Park, were at first executed as small pen and ink works, before being enlarged into sepia works on paper. The name of each work was a date; the date was the time at which the artist finished the work, and so, as Rondinone puts it, “the title worked with the mental and optical space of the wooded landscape to form the ultimate force of life – time and space.” 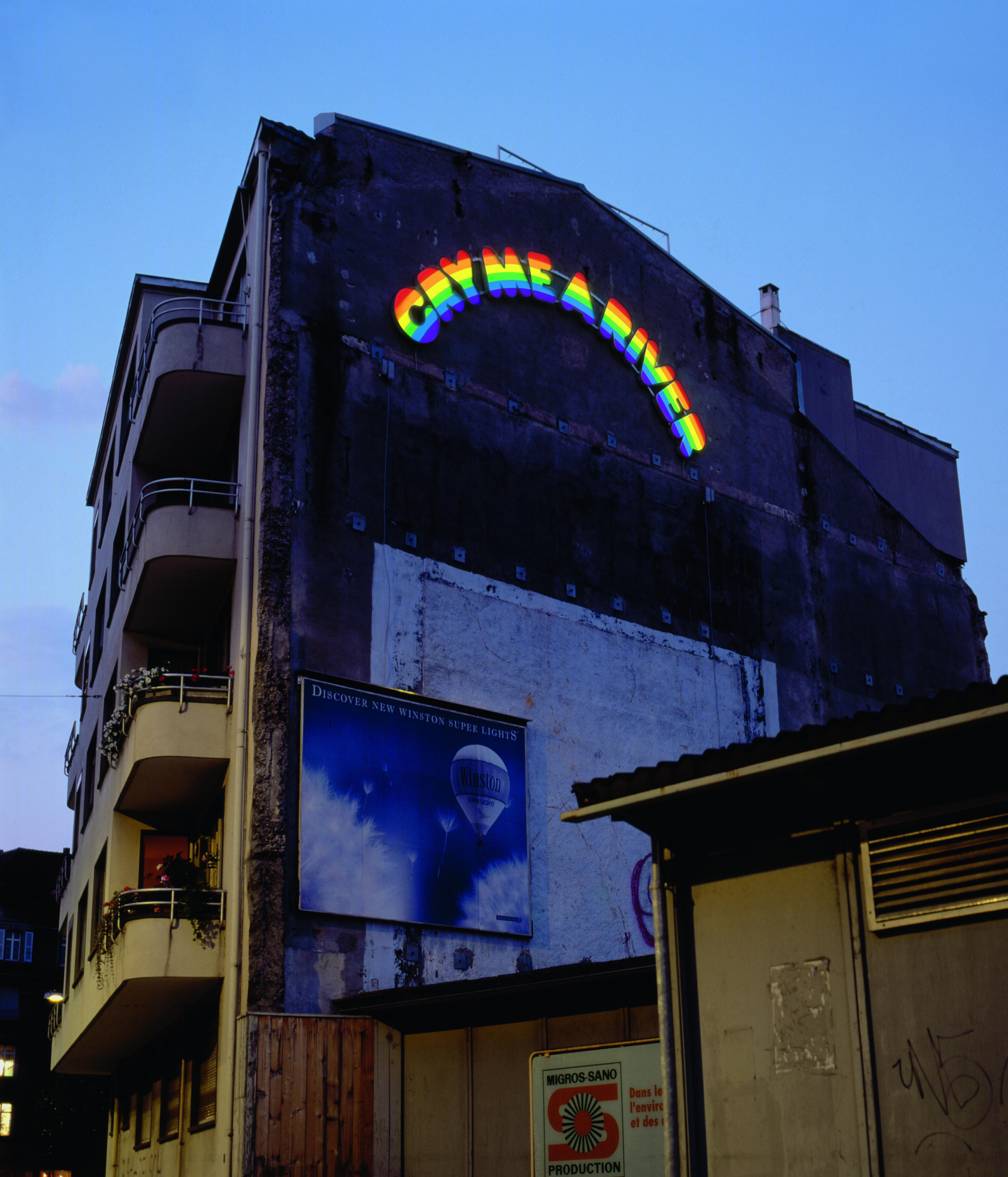 That notion of space and time is expressed in quite a different way in his best-known canvases: his sun paintings. Made in the early ‘90s, these smooth, roundel-like pieces were painted using an airbrush, and have a machine-like perfection to them.

“Whereas the landscapes present a nostalgic view of the past, the sun paintings look into the future with their ultra-modernistic style of colorful concentric circles,” Rondinone explains in the book. “These two groups of works, started almost at the same time, were the base of a binary system, which to this day guides my practice and its continuity.”

From 1992 onwards Rondinone showed his sun paintings in association with other works. In heyday, a show at Centre d’Art Contemporain in Geneva, they hung alongside the photographic group i don’t live here anymore, in which Rondinone is shown cross-dressed as a multitude of female types.

"These pairings might seem loose, but with them Ugo Rondinone is striving not only for a perfect balancing of motifs, but also of formal qualities," writes Erik Verhagen in our new monograph.

"Rondinone often resorts to an antagonistic principle that literally and figuratively sets up a dialogue between masculine and feminine, not to be understood as a sign of a heterosexual norm, but as an image of opposite energy – another way of generating a timeless situation and producing hypnotic mantras, absurd, stereotyped, hollow dialogues between a ‘man’ and a ‘woman’."

"Rondinone’s work is based on a dialectical project focused on contrasts, not to say contradictions, with inside and outside, day and night, the personal and the impersonal, openness and closure (characterised by isolation or protection), private and public, veiled and unveiled, being constantly combined."

"Sometimes these combinations are implemented in the same series of works or in an exhibition. Sometimes this law of contrasts will be relayed by the effects of alternations where, from one family of works to another, the artist will instil this or that atmosphere, this or that ‘temperature’. Via the image of his transvestite self-portraits, the artist seems in effect to be simultaneously revealing himself while retracting; providing a key while concealing the lock. Rondinone says that the blur of the sun paintings finds its echo in the blurred gender identity of the photos."

Rondinone relocated to Manhattan in April 1997, and later that year created the first of his most recognisable works: his ‘Night Rainbows’, or rainbow-coloured signs. “I used a popular symbol, the rainbow, as a vehicle to charm the world with a poem," he says. "And, as a queer man, I had my personal attachment to the rainbow. We were still impacted by the AIDS crisis at that time, and I felt it was important to make a gay positive public statement.” 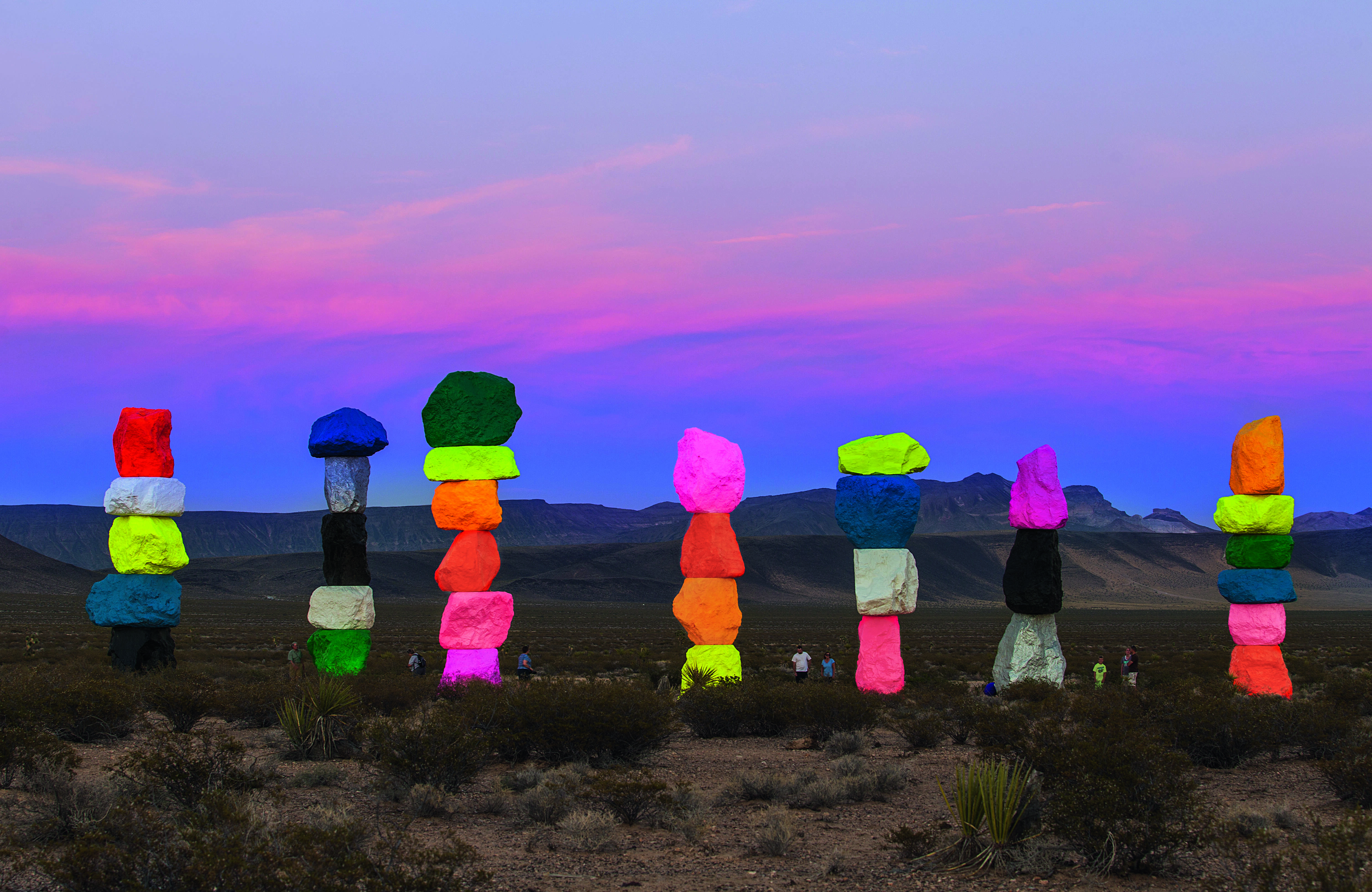 The phrase he chose for that initial rainbow, CRY ME A RIVER, seems suitably ambiguous and melancholic, yet the tone changed a couple of years later when Rondinone fell in love with the American poet John Giorno. The relationship prompted him to make a rainbow sign that read, ‘LOVE INVENTS US’. It was exhibited above Galerie Hauser & Wirth & Presenhuber in Zurich in 1999.

Similarly bright pigments were used by Rondinone in 2016, when the artist made his widely visited work of land art, Seven Magic Mountains, just south of the Las Vegas Freeway, 20 miles outside of Vegas, on the road to LA. These stacks of boulders partly pay tribute to his father’s profession (he was a mason) but they’re also a response to, and a reaction against, the land art of the 1970s. “Land art was a reaction to the commodification of the art object and an affirmation of the connection between art and the environment,” Rondinone explains in the book.

“Seminal works like Michael Heizer’s Double Negative or Robert Smithson’s Spiral Jetty or Nancy Holt’s sun tunnels are hard to find, since the muted colours of the work camouflages them with the surrounding of the landscape. My intention was to mix the language of Land art with the language of Pop art by giving the natural material of stone a coat of aggressive dayglo colour, which in turn gave the stone an artificial appearance.”

It’s certainly a popular choice. The artist says Seven Magic Mountains attracts about 1000 people a day and is so popular a rest stop that that Google Maps lists the spot not as an artistic site but as a tourist attraction. Yet despite this popularity, the work still very much functions within Rondinone’s spatial and temporal remit.

“To get there is an adventure in itself, since one is surrounded and immersed in the beauty of nature,” he says. “Once you’re there, you have everything the desert can give to you: space and silence.”

More on How Ugo Rondinone re-invents life, love, experience, identity and even time and space itself around him

Ugo Rondinone, the AIDS crisis, and his mystic creativity