In February 1970, Life magazine published a two-page spread on the artist Lynda Benglis, with the headline ‘Fling, Dribble and Dip’. It showed Benglis, then aged 28 or 29, pouring coloured latex directly from the can, to create highly pigmented, abstract works right onto the studio floor. In case the comparison was lost on readers, Life inserted a black-and-white picture taken a couple of decades earlier, of the abstract expressionist Jackson Pollock, dripping paint onto his canvas, which was also laid on the floor.

It’s an association that Benglis acknowledges. Though she’s quite a bit younger than the original abstract expressionists, the debt this sculptor owes to Pollock, as well as other ab-exers such as Barnett Newman and Helen Frankenthaler is recognised by both the wider art world and the artist herself. In our new book, Bengls is quoted as saying that, despite rejecting terms such as minimalist and post-minimalist, in the late 1960s, "I thought of myself even then as being related to the expressionists."

Yet Benglis was no abstract expressionist copyist. Instead, she felt her way around the movement, and even built upon its achievements on her move to NewYork City in 1964. At that time the influence of abstract expressionism was giving way to newer movements such as minimalism and pop. Benglis soon found herself in a community of fellow artists from all these schools, including Barnett Newman, Andy Warhol and Frank Stella.

Rather than follow a specific trend or worship at the feet of past masters, Benglis recalls those early exchanges as being “more, you show me yours and I’ll show you mine," as she puts it in her new book. A naturally competitive artist, she examined the movements, works and ideas this new social circle brought to her. "Having an idea is a little like throwing a pebble into the water and watching the ripples. It disrupts the calm, but it makes things more interesting. I knew that my work was very open-ended. Art is very much like science – you ask a question, but there’s no definitive answer. You keep exploring and one question leads you to another." 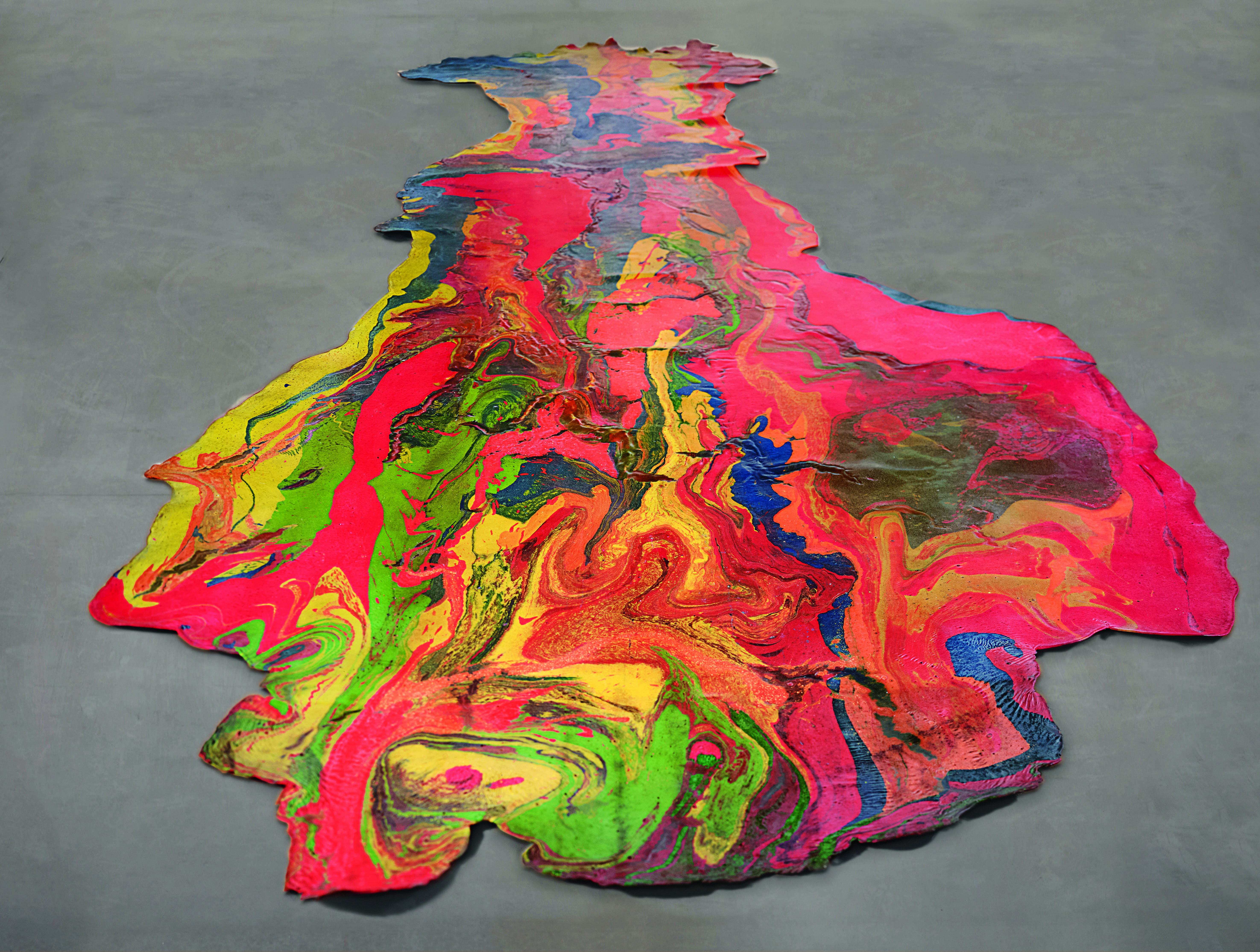 When exploring abstract expressionist ideas, Benglis realised a link between that splashy, expressive art, and a much earlier, simpler experience. "One of the earliest physical sensations I often think about is wrestling with my bed sheets," she says in her new book. "That sense of being consumed by something, grappling with it and in the process your body and the materials intermingle. My way of working has always come from a freedom with my materials. I owe that to Jackson Pollock and Helen Frankenthaler: Pollock had the handwriting and Frankenthaler had the flow. In Pollock’s work I felt the stretching, the tension. Frankenthaler’s work never had the same tension for me, but it had a beautiful flow, a quality that was important to me too."

You can see this very clearly in work such as 1969’s Contraband, an intermingling pool of poured DayGlo pigmented latex. Yet Benglis’s work takes a step on from that created by Pollock and his contemporaries. While their works ultimately rise from the floor to be hung on the wall as a conventional painting, Benglis’s floor works stay horizontal, thus raising important questions about the division between sculpture and painting. 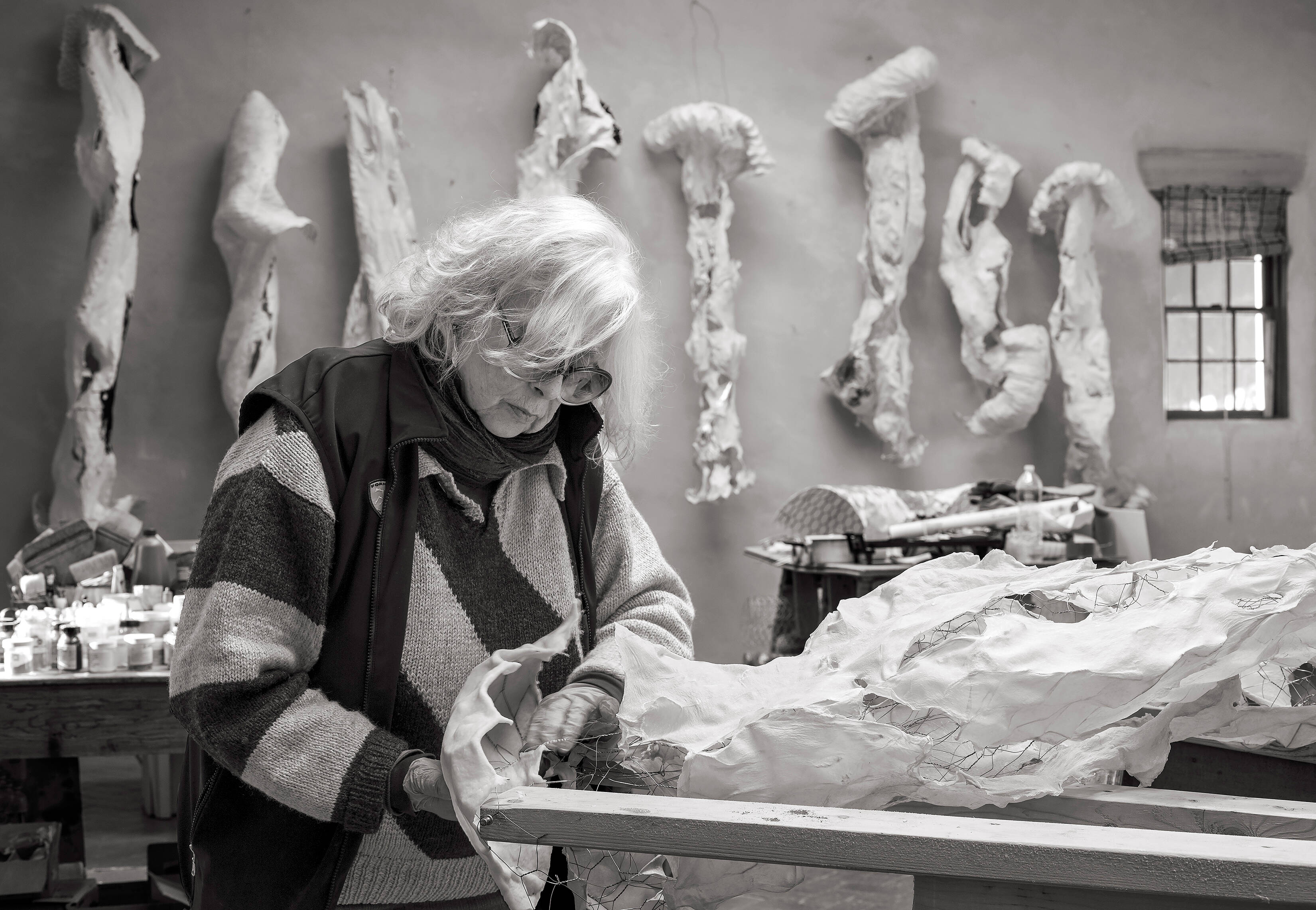 "Benglis, in her floor pieces and wax paintings, rendered categorization as painting or sculpture difficult – if not impossible – to make," writes the art historian Bibiana Obler in our new book. "With artworks like these in circulation in New York in the late 1960s and early 1970s, it is no wonder that the Whitney Museum of American Art gave up its separation of Painting and Sculpture Annuals in favour of the Biennial format, which they launched in 1973. Talk about shifting the course of art history."

To see those works and better understand that historic shift, order a copy of our new Lynda Benglis book here.