The surprising history of pizza

Modernist Pizza might apply the latest science to the pizzaiolos’ role, but it also dishes up deep history too

Modernist Pizza certainly applies a little science to the task of making a great slice. In this huge, comprehensive, three-volume publication, authors Nathan Myhrvold and Francisco Migoya share innumerable practical tips and innovative techniques to create great pizzas. Myhrvold is Microsoft's former Chief Technology Officer and studied under Stephen Hawking at the University of Cambridge, and so almost all of those tips and techniques aren’t simple repetitions of old hunches and dogma, but the product of numerous test-kitchen experiments. Want to know the precise effects of ageing on mozzarella? Or which parts of your oven really cook your pie? Then get this set of books.

However, the authors also took time to look into pizza history, to discover how this Neopolitan street speciality made its way around the world. In a particularly enlightening section, the book traces the earliest pizza recipes.

The first English recipe comes in 1898, essentially repeating the French version, and describing pizza as “a sort of cake that is a favourite dish in Naples.” 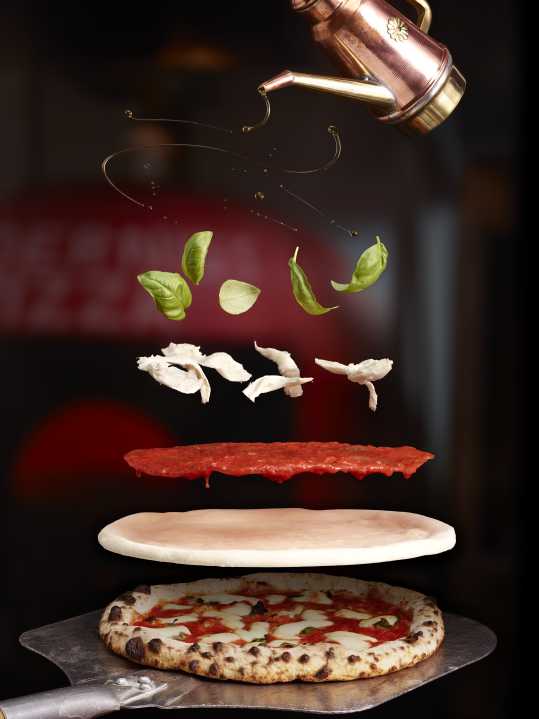 The first Italian recipe for Pizza alla Napoletana came in 1904. There were two variations: one topped with anchovies and oil; the other with Swiss Cheese and oil. In 1911, a later Italian recipe came with more conventional toppings of anchovies, mozzarella and tomatoes.

In 1927, the Saturday Evening Post published America’s first pizza recipe. Its author, George Rector, included it in his Cook’s Tour column, describing the pizza as “part of a typical Tuscan meal.” Again, the toppings were tomatoes, anchovies, mozzarella and olive oil.

In 1936 the second American recipe appeared, in an English edition of the Specialita Culinarie Italiane cookbook. It called for raised dough, tomatoes, olive oil, Parmesan cheese and ‘scamozza’ (perhaps a misspelling of scamorza, the southern Italian cow cheese.)

In 1947, the New York Times got things a little nearer the mark, with its recipe, which features Parmesan cheese, mozzarella, tomato, chopped anchovies and oregano among the toppings. 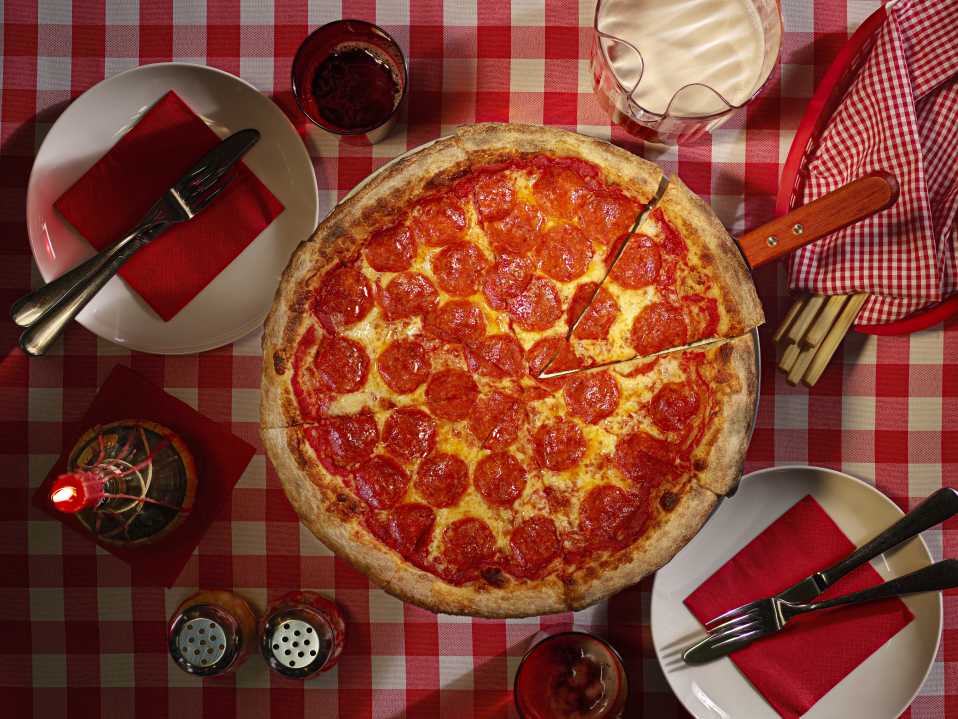 Pizzas took a turn for the worse in 1954, in the American Westinghouse Cookbook. Its pizza recipe used “hot roll mix” for the crust, condensed cream of tomato soup for the sauce, and cheddar, oregano and crushed red pepper as toppings.

1961, and the Italian cookbook Il Carnacina added some decorum, and a bit of variety, with a marinara recipe (featuring anchovies), as well a simple, Margarita-style offering.

Over a century on from the first recipe’s appearance, in 1997, the Associazione Verace Pizza Napoletana (AVPN) published their recipes to maintain and protect the standards of “true” Neapolitan pizza, in the AVPN handbook. 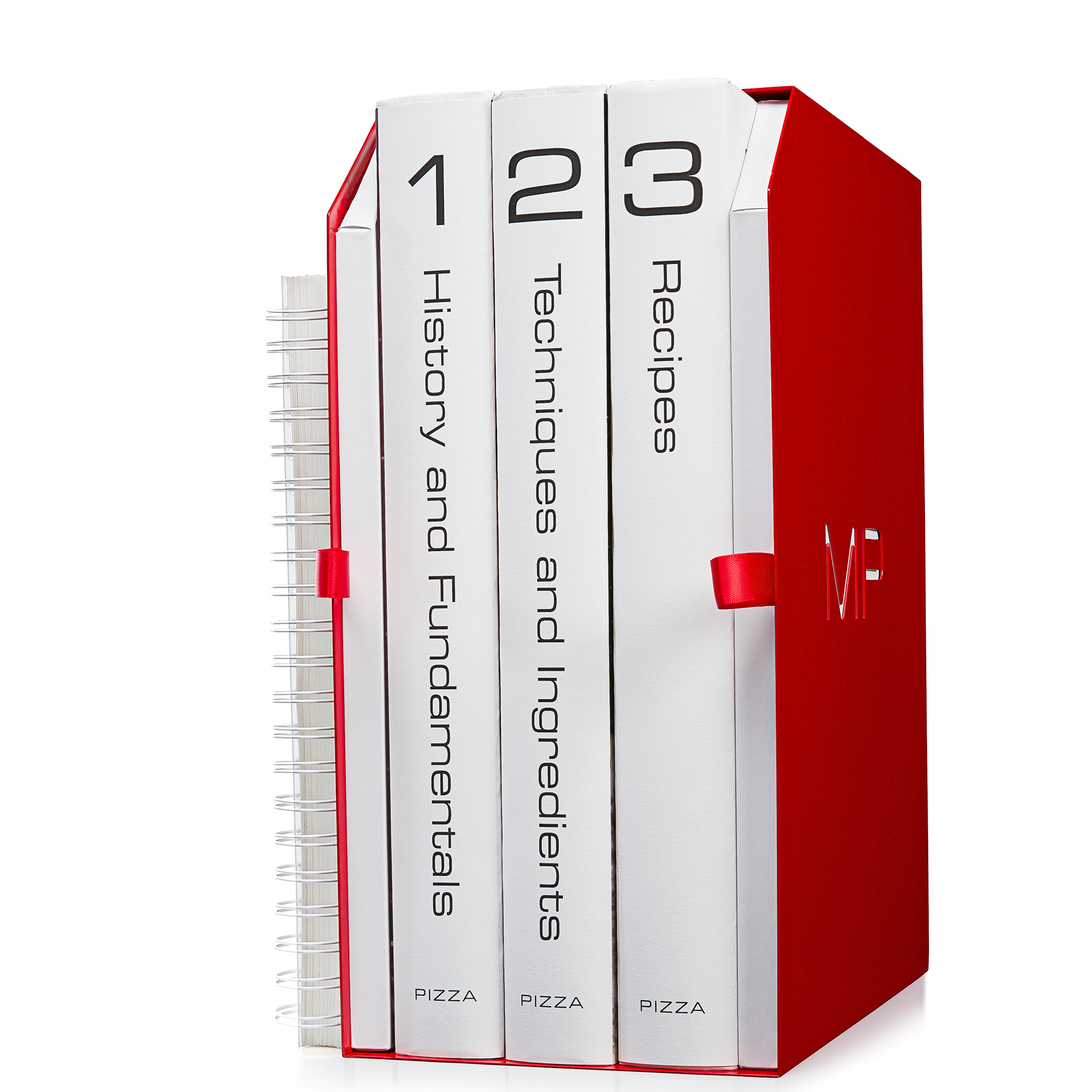 So, is that the end of pizza history? Not if Modernist Pizza has anything to do with it. For more on pizza's past  as well as many tips on how to make it best in the future, order a copy of Modernist Pizza here.

Modernist Pizza is the definitive guide to the world’s most popular food. Created by the team that published the critically acclaimed Modernist Cuisine: The Art and Science of Cooking and Modernist Bread, this groundbreaking set is the culmination of exhaustive research, travel, and experiments to collect and advance the world’s knowledge of pizza.

Authors Nathan Myhrvold and Francisco Migoya share practical tips and innovative techniques, which are the outcome of hundreds of tests and experiments. Spanning 1,708 pages, including three volumes plus a recipe manual, Modernist Pizza is much more than a cookbook: it’s an indispensable resource for anyone who not only loves to eat pizza but is also interested in the science, stories, cultures, and history behind it.

Each gorgeously illustrated chapter examines a different aspect of pizza, from its history and top travel destinations to dough, sauce, cheese, toppings, equipment, and more. Housed in a red stainless-steel case, Modernist Pizza contains over 1,000 traditional and avant-garde recipes to make pizza from around the globe, each carefully developed with both professional and home pizzaioli in mind.

Modernist Pizza will provide you with the tools to evolve your craft, invent, and make sublime creations. There’s never been a better time to make pizza.

Nathan Myhrvold, founder of Modernist Cuisine, is the lead author of Modernist Cuisine: The Art and Science of Cooking, Modernist Cuisine at Home, The Photography of Modernist Cuisine, Modernist Bread, and Modernist Pizza. He routinely pushes the boundaries of cuisine as a chef, scientist, photographer, and writer. He did postdoctoral work with Stephen Hawking and while working as the CTO of Microsoft, he took a leave of absence to earn a culinary diploma from École de Cuisine La Varenne in France. Nathan retired from Microsoft in 1999 to found Intellectual Ventures and pursue several lifelong interests, including photography and cooking. Inspired by the void in literature about culinary science and the cutting-edge techniques used in the world’s best restaurants, Myhrvold assembled the Modernist Cuisine team to share the art and science of cooking with others. Modernist Cuisine Gallery by Nathan Myhrvold opened in 2017 after Nathan received continued requests to buy photographs found in his books. With four locations, the gallery features large-scale, limited-edition artwork and ships worldwide.

Francisco Migoya, head chef of Modernist Cuisine, is the coauthor of Modernist Bread and Modernist Pizza. Together with Nathan Myhrvold, he directs culinary research and development of new techniques and recipes. An innovative pastry chef, Migoya’s book, The Elements of Dessert (John Wiley & Sons, 2012), won a 2014 International Association of Culinary Professionals Cookbook Award. He has been recognized as a top US pastry chef and chocolatier with accolades that include the Medal of Master Artisan Pastry Chef (2013) from Gremi de Pastisseria de Barcelona. Migoya owned Hudson Chocolates in New York and worked at both The French Laundry and Bouchon Bakery as executive pastry chef. Prior to joining the Modernist Cuisine team, Migoya was a professor at The Culinary Institute of America where his areas of instruction included bread, viennoiserie, pastry, and culinary science.