All you need to know about Nonstop

We're proud to publish world-famous children’s author Tomi Ungerer's final book this season. It is, without doubt, a masterpiece

You don’t have to be young to write great children’s literature. Right up until his death in February 2019 at the age of 87, the French-born artist, illustrator and author Tomi Ungerer was creating beautiful conceived, sharply plotted, award-winning books for young readers, that covered everything from space travel to the holocaust, and featured an endless charming array of characters, including teddy bears, talking hats, an industrious family of pigs, and many brave and charming children. 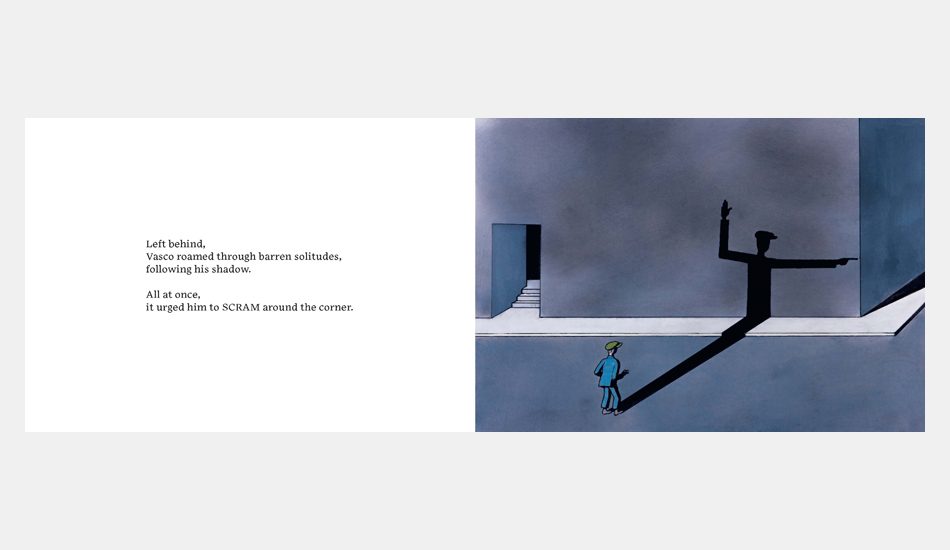 His 1960s books, Moon Man and The Three Robbers, were both adapted into films; his more recent work, Fog Island, was singled out as one of The New York Times' Best Illustrated Children's Books of 2013; and he won the Hans Christian Andersen Medal in 1998 for his life-long literary contribution.

However, in many ways, he saved the best until last. Phaidon is proud to posthumously publish Ungerer’s final story, and it is, without a doubt, a future classic. Entitled Nonstop, the book tells the story of the young protagonist Vasco, who has to survive in a time where Earth is devastated and abandoned; everyone else has escaped to the moon. 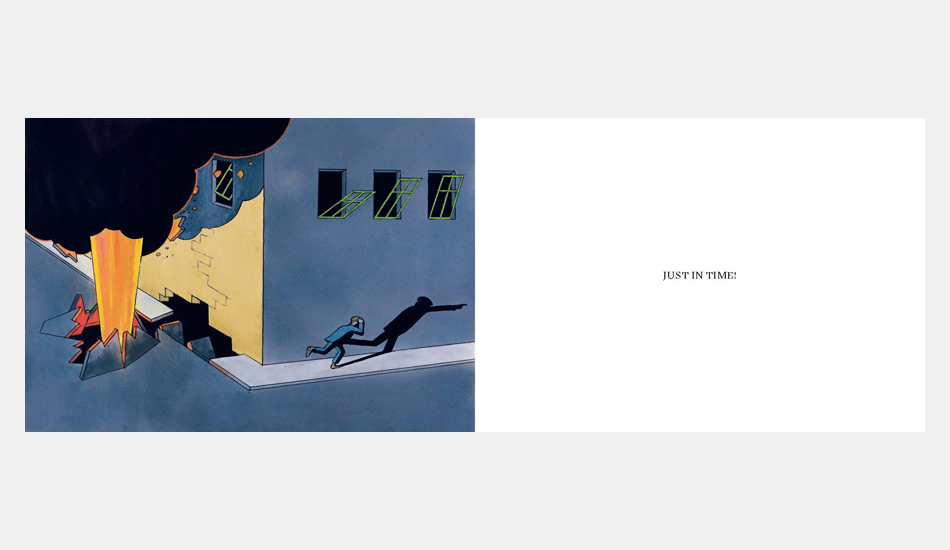 Aimlessly wandering the empty streets, with only his shadow for company, Vasco soon discovers that his ever-changing, penumbral companion, can actually warn him of danger ahead. And so, a charming yet perilous journey begins.

After escaping a series of pitfalls his shadow leads him to a strange creature called Nothing. It soon becomes clear that Vasco must get Nothing’s newborn child, Poco, to safety. Nonstop angers await them at every step, but Vasco’s shadow leads the way. Together they flee through apocalyptic landscapes until, finally, they reach a safe haven. Here, Vasco’s shadow quietly disappears. 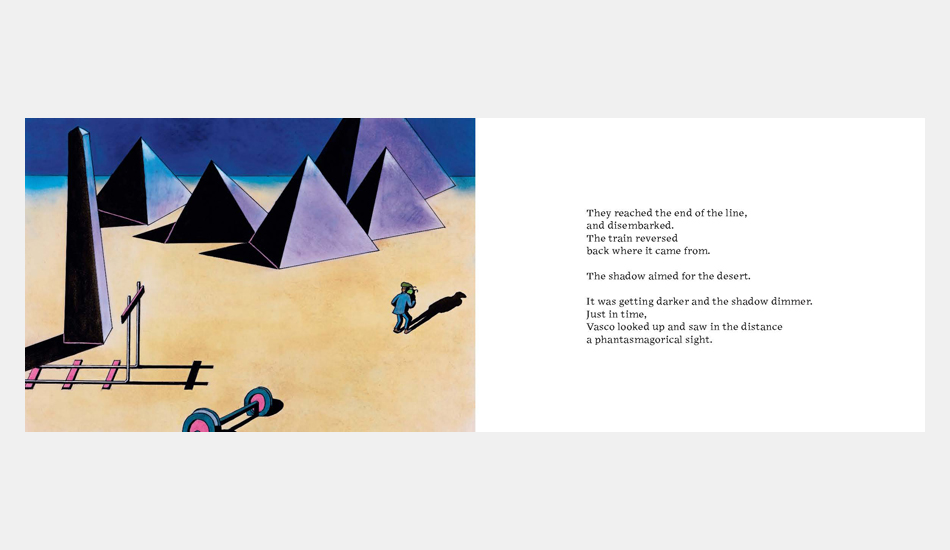 It’s a tough yet comforting story, which serves as a simple fantasy tale, a latter-day myth, and a timely metaphor. Ungerer's illustrative powers are certainly at their peak in this last book, in which he pairs a striking palette with beautiful choices of perspective. In all, this final masterpiece is both visually satisfying and narratively nourishing, and will delight readers whether they’re five-to-eight-year-olds (the book’s stated audience) or adults, and still alive to great storytelling. 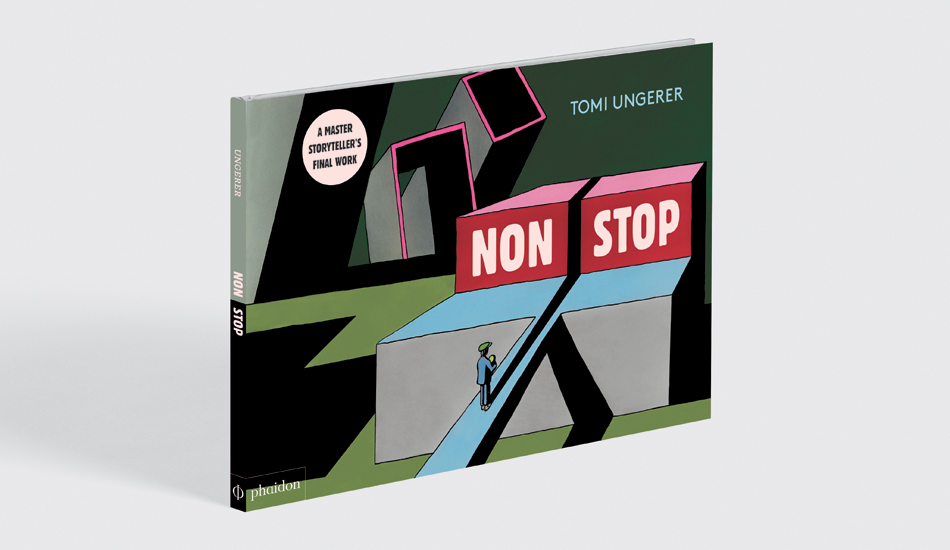 To find out more and to order your copy of this brilliant book, go here.

In this final masterpiece from the late Tomi Ungerer, Earth is devastated and empty. Everyone has escaped to the moon — except Vasco. Luckily, Vasco has his shadow to guide him, and he fi nds little green Poco — someone to care for and bring to safety. Nonstop dangers await Vasco and baby Poco at every corner, but Vasco's shadow rescues and guides them through destroyed cities and apocalyptic landscapes to safety. It's a timely, thought-provoking tale of friendship, trust, and hope.

Tomi Ungerer was an author and illustrator with more than 140 books to his name. Winner of the Hans Christian Andersen award, his work is exhibited globally, with a museum entirely dedicated to his work in Strasbourg, France. His bestselling book, The Three Robbers, has sold over 2.5 million copies worldwide.

"This posthumous work by iconoclastic picture-book creator Ungerer is austere and puzzling, yet ultimately hopeful.... This disorientating tale references several well-worn stories of adventure, exodus, and environmental turmoil; however, its greatest strength is found in its heroes' resilience against all odds." —Horn Book Magazine

Starred Review: "Share this with older picture book readers or in story hours for vivid discussions of what life is, and what is our purpose. A must purchase, though cryptic, for its sobering affirmations of life despite crisis will reassure all ages." —School Library Journal

"This speculative tale from the late Ungerer offers a dark view of the future-and a sliver of hope. Humankind may teeter on the edge of disaster, Ungerer acknowledges, but it may endure anyway-somehow." —Publishers Weekly

"It's a masterpiece. Ungerer has created an all-ages classic, a fitting capstone on a fearless career — and just in time." —New York Times

"This posthumously published book by Phaidon delivers messages of resilience, trust and friendship that are acutely tied to our lives today." —Design Week

"With a palette of mauvey pinks, twilit blues and velvet black, it's characteristically weird, unsettling and wonderful." —The Guardian