Aitor Throup, one of the cutting edge designers featured in our fine book Pattern has just created the visuals for Blur singer Damon Albarn's first solo album, Everyday Robots, The album and the first single from it features artwork and a video by Throup - one of the 100 outstanding fashion designers selected by 10 of the field's leading professionals (designers, stylists, editors, educators, bloggers and writers) for the Pattern survey.

Throup says the work he created was inspired by the theme of portraiture, with the designer keen to show different elements of Albarn's character. The video for the single, also titled Everyday Robots, is a portrait of Albarn created in CGI. The album is out in April. You can watch Throup's video below.

“I spent a lot of time with Damon in the studio, and I really wanted to capture his intentions and messages while proposing a unique way to convey them visually," says Throup. "There are specific lyrics that strike me, and particularly his analysis of how we are at times like robots, everyday on our phones ‘looking like standing stones’. I was really interested in the idea of how the challenge of living with technology has turned us into repeats of the same. It’s a sort of individual statement on the loss of individuality through technology, done in a way that at the same time not only embraces it, but is dependent on it."

The video for Everyday Robots was created using the gaming industry 3D CGI programme ZBrush. More than the finished result it was the creative process that excited Throup and it's this that's featured in the video, where Throup's portrait of the singer is built from the skull outwards in synch with the song.

“When I saw the programme being used for the first time, I was fascinated by the interface of the programme itself, and the process of creating a final product within it," Throup told Creative Review. "I was more interested in the process that the programme offered than the eventual result. So that’s what we’ve captured – we’ve screen-captured an authentic digital sculpting process that wouldn’t normally be seen as an animation. It’s not an animation as such, it’s just a captured process." 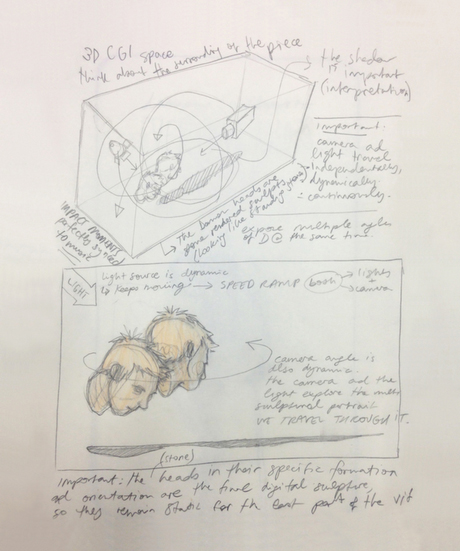 "I really wanted to capture him in isolation, surrounded by nothingness," says Throup. "But I didn’t want him to pose. So in between shots when he wasn’t aware I was shooting, that’s really when I was taking the shots. The idea of giving him an identity, making him almost a brand was quite challenging."

Everyday Robots is out on April 28 featuring contributions from Brian Eno and Bat For Lashes. Check out Aitor Throup's website here and take a look at Pattern here. Meanwhile, for more on branding check out Michael Johnson's excellent Problem Solved and Damn Good Advice by George Lois.

PATTERN is the follow-up to the 2005 Phaidon success SAMPLE, presenting 100 of the most creative fashion designers who have recently emerged internationally. Selected by 10 of the most respected figures in the field – a mixture of leading designers, stylists, editors, educators, bloggers and writers – it is a must-see catwalk in a book. Specifications:

Imran Amed (London/New York) is a fashion business writer, editor and entrepreneur, and is founder and editor of the website The Business of Fashion.

Tavi Gevinson (Chicago) is an American fashion blogger who started her blog Style Rookie in 2008 at age 11.

Tim Lim (Shanghai) is a stylist and fashion editor and currently the Group Fashion Director at Modern Media.

Preen (London) is the fashion label of designers Justin Thornton and Thea Bregazzi, which has garnered international acclaim for its structural sophistication and pared back opulence.

Yasmin Sewell (London) is a fashion retail consultant, creative advisor for fashion brands and most recently the Chief Creative Consultant for Liberty of London.

SHOWstudio (London) is a groundbreaking fashion and photography website that under the guidance of founder Nick Knight continues to redefine the representation of fashion online.

A.F. Vandevorst (Antwerp) is the fashion label of designers An Vandevorst and Filip Arickx, celebrated for its elegantly intellectual take on femininity and rich palette of influences.

"I love this book. Pattern saves me from having to search a ton of uber-cool websites and blogs to find all the new, cool, edgy and emerging designers around the world. It's a great resource, and edited by credible, interesting curators."—Fern Mallis, former Executive Director of the Council of Fashion Designers of America

"Pattern features established designers, well-known emerging labels, and proper newbies. The designers’ diverse aesthetics, techniques and outlooks are presented via detailed introductions, backstage, campaign and editorial photographs, and never-before-seen sketches, all of which serve to give readers an in-depth understanding of their work."—Style.com

"Phaidon has done it again... Fashion lovers will devour this hefty four-hundred page book. This is a gorgeous book... Exactly what you need on your coffee table."—Beso.com

"This hefty volume, a follow-up to Phaidon's Sample (2005) takes on an almost impossible task: identifying the 100 most influential new designers of the moment... The book, presented in a printed Tyvek shoulder bag, offers something for everyone."—Publishers Weekly

"Kudos for Phaidon’s newest book Pattern - 10 curators from around the world describe a groundbreaking generation of the most courageous fashion designers. I especially admire those designers whose creativity is combined with sound business acumen."—Adrienne Vittadini, fashion designer

"We'll be spending the next few months swooning over the pages of Pattern, the most current, comprehensive and, well, beautiful collections of fashion designers and their work we've seen for a long time... No humble fashion list, Pattern is an opus giving four pages each to the designers and cover never before seen photographs, drawings, sketchings and computer renderings If there's one thing on our must-have list this season this might just be it."—Top Shop blog, Inside Out