The Contemporary Series Artist's Two Tables with Floral Pattern broke its $2 million estimate when it sold for $6.5million at this week's 21st Century Evening Sale

Los Angeles-based artist Wood has established himself as the reigning prince of contemporary painting, using playful geometrics and lush, vibrant color to excavate traces of memory and domestic selfhood. His work combines art historical references with images of objects, interiors, and people that comprise the fabric of his life.

His ascent to art stardom has included a spate of critically acclaimed solo shows in the world’s most prestigious outlets, including a recent turn at the Dallas Museum of Art and his work has been collected by the Guggenheim and Hammer Museums. 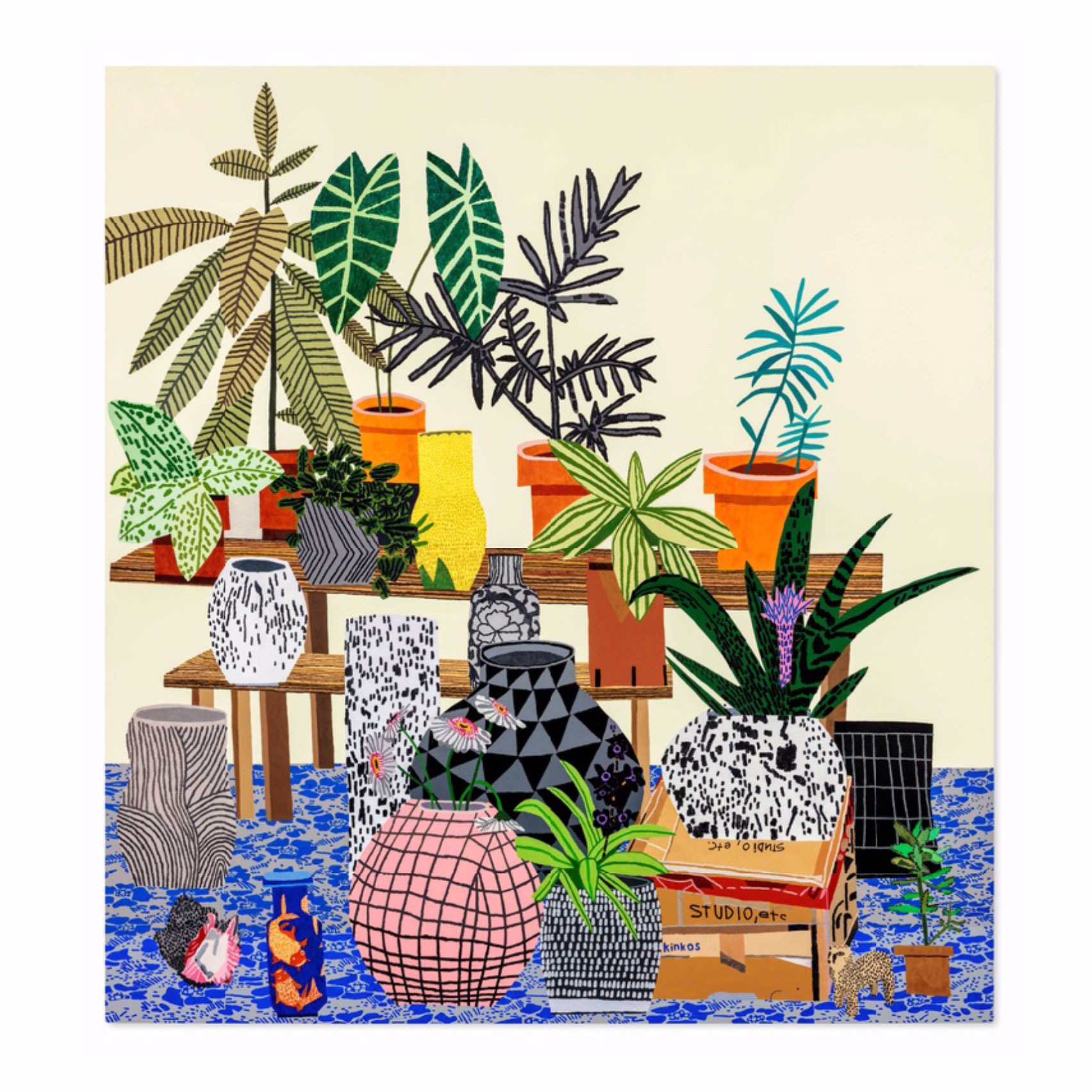 Wood, as you'd hope and expect, explained the lasting value of his art, rather than its price, when we interviewed him around the release of his Contemporary Artist Series book and limited 200 edition print.

"There's so much more to art than just what it ends up aesthetically looking like or feeling like,” Wood told us. “I think that there's a lot of value in seeing things from a different perspective. I was introduced to Phaidon’s Contemporary Artists Series with monographs by Peter Doig and Franz West, which were so revealing visually. So when we were thinking about what to do for the limited edition print, I went back and looked through my drawings and found the original drawing I had used as a tracing to make the painting that eventually became the book cover. It represented what I think this book is about: process. 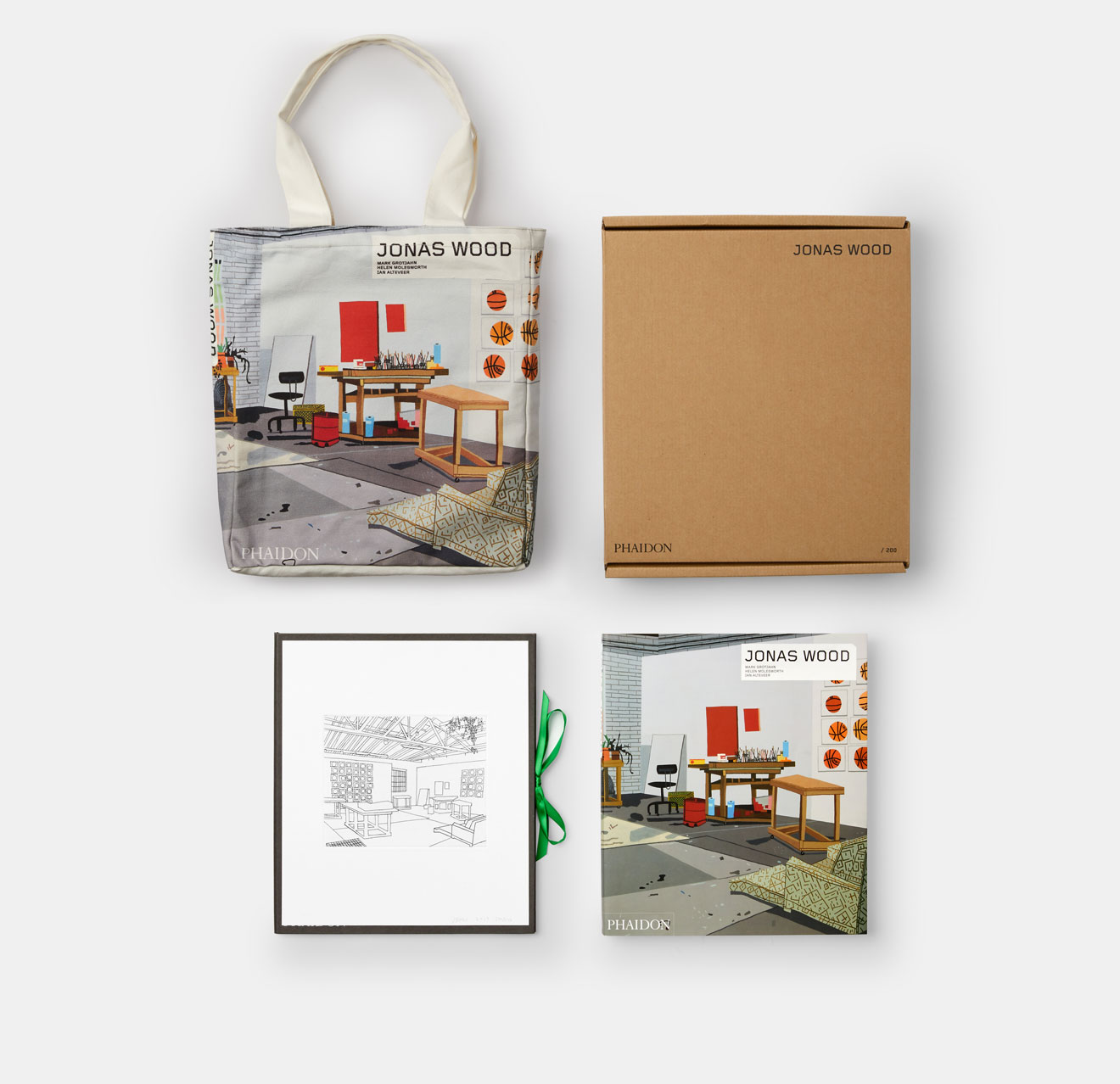 That process of making the Phaidon book and the accompanying etching was not without nostalgia for Wood. "I'm trying to appreciate things like that, because I think I live in a way that's very much in the moment. But it's nice to look back and see some of the older work, like some of the really simple plant paintings, and some of the really complicated interiors. It has changed but hasn't really changed. There are always new things I want to paint about, but there's a lot I still keep coming back to.

"So it wraps up all of these things: nostalgia of this old studio I rented from Ed Ruscha in 2007 after my first show in New York, (This is where I started making drawings of isolated basketballs, pinning them up on the wall, and looking at them in grids and eventually making paintings of them) this great painting that we used for the cover, and the original drawing, changed back into a print—eight years later—to raise money for charity."

Bball Studio, 2019,  comes inside a portfolio, complete with a silkscreened tote bag and a hardcover copy of the monograph. The etching, which was printed in-house by Jonas Wood's studio, comes from a small run of 200. A few copies are available here. 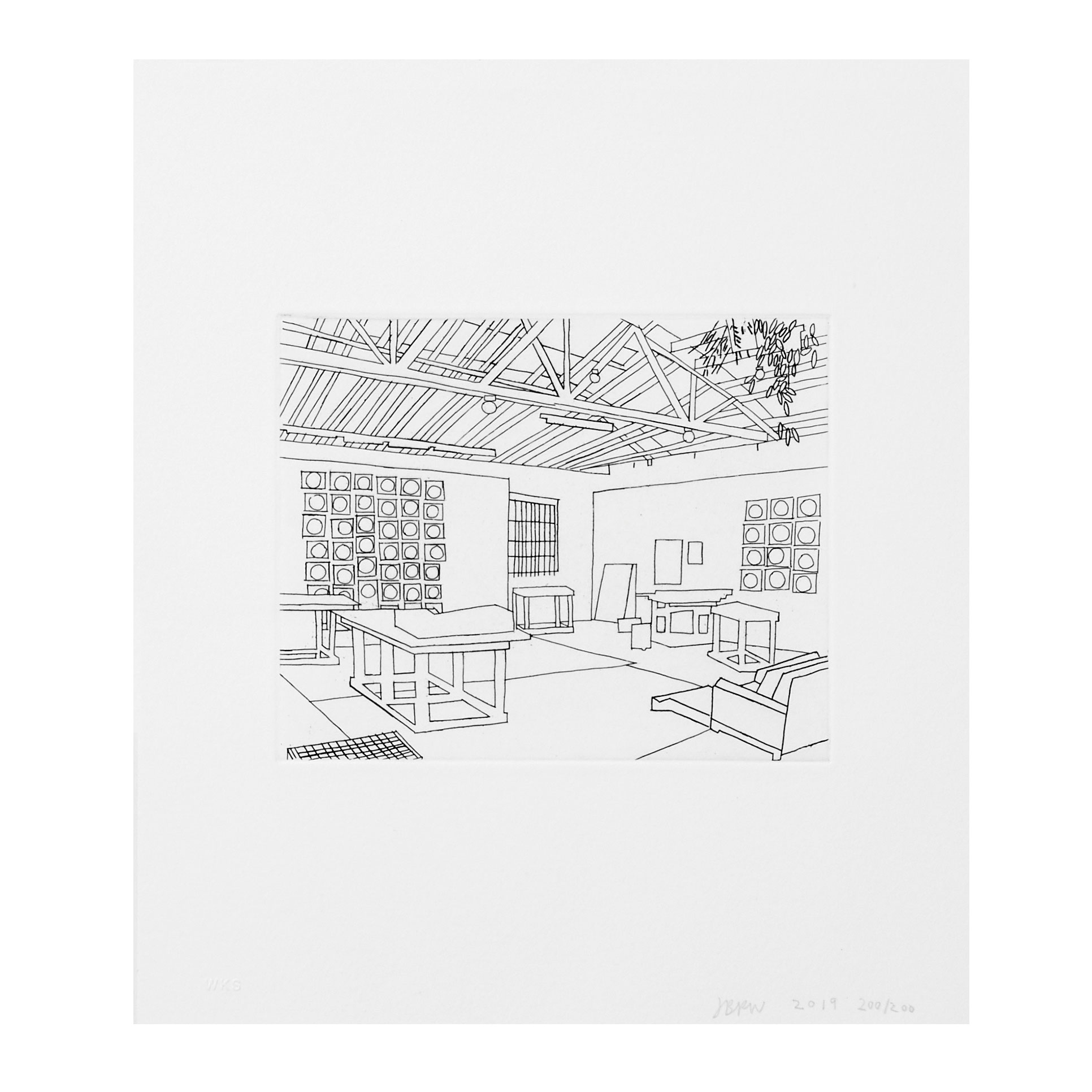 Jonas Wood's Bball Studio (2019) depicts the studio that Wood rented from Ed Ruscha from 2007 to 2017. "Everything kind of happened in that space", Wood recounts in an exclusive interview with Artspace. The etching recreates a preparatory tracing that Wood says was the impetus for the painting featured on the cover of Phaidon's monograph, Jonas Wood.

The etching, produced in-house by Jonas Wood's studio, is signed and numbered to 200, and comes with a hardcover copy of Phaidon's Jonas Wood, inside a silkscreened limited-edition tote bag. "It wraps up all of these things: Nostalgia for this old studio, this great painting that we used for the cover, and the original drawing changed back into a printâ€”eight years laterâ€”to raise money for charity," says Wood. Proceeds benefit Creative Growth, an Oakland-based non-profit that serves artists with developmental, intellectual, and physical disabilities.

With one foot rooted in Analytic Cubism and the other in Contemporary Pop art, Jonas Wood is an artist who bridges two seemingly disparate traditions to create paintings that present contemporary life from multiple perspectives. Born in Boston and now living and working in Los Angeles, Wood took a somewhat circuitous route to becoming a professional artist, even considering pursuing a PhD in psychology before deciding on an MFA in painting. His work still contains subtle psychological elements, tying together elements of the past and the present, either through empty but intimate interiors or through other paintings of contemporary American life. Wood's use of color in his embracement of quotidian domestic settings calls to mind David Hockney's dreamlike depictions of suburban subjects. Though not inherently mathematical in composition, the artist's paintings often contain numerous intersecting geometrical elements, as objects and patterns become flattened in his artistic process, which involves creating drawings of photographs of his subjects that eventually serve as the primary models for his paintings. In creating artworks from the items and environments around him, whether they are sports imagery, animals, or furniture, Wood extracts the beauty from the ordinary, proving that there's more to the everyday than meets the eye.