Love, Rihanna: Luxury Supreme - The Making of an Iconic Book

It takes five people a total of four days to make each copy of this incredible new limited edition visual biography, designed by The Haas Brothers and Barnbrook Studio and hand signed by Rihanna herself!

Try, if you can, to imagine a book that weighs 60lb, features 11 special inserts (including: 9 bound-in booklets), a die-cut tip-in sheet, and a double-sided removable poster, that’s wrapped in a specially produced fabric never used in bookmaking until now, inlaid with a custom-made metal grill, and that takes five people a total of four days to produce each copy.

Factor in the exacting standards set by one of the biggest stars on the planet today, and the desires and wishes of all the incredible artists, designers and typographers involved in the project to create something of which they will be truly proud and you might begin to appreciate the unprecedented lengths we went to in order to bring our new Rihanna book into being. 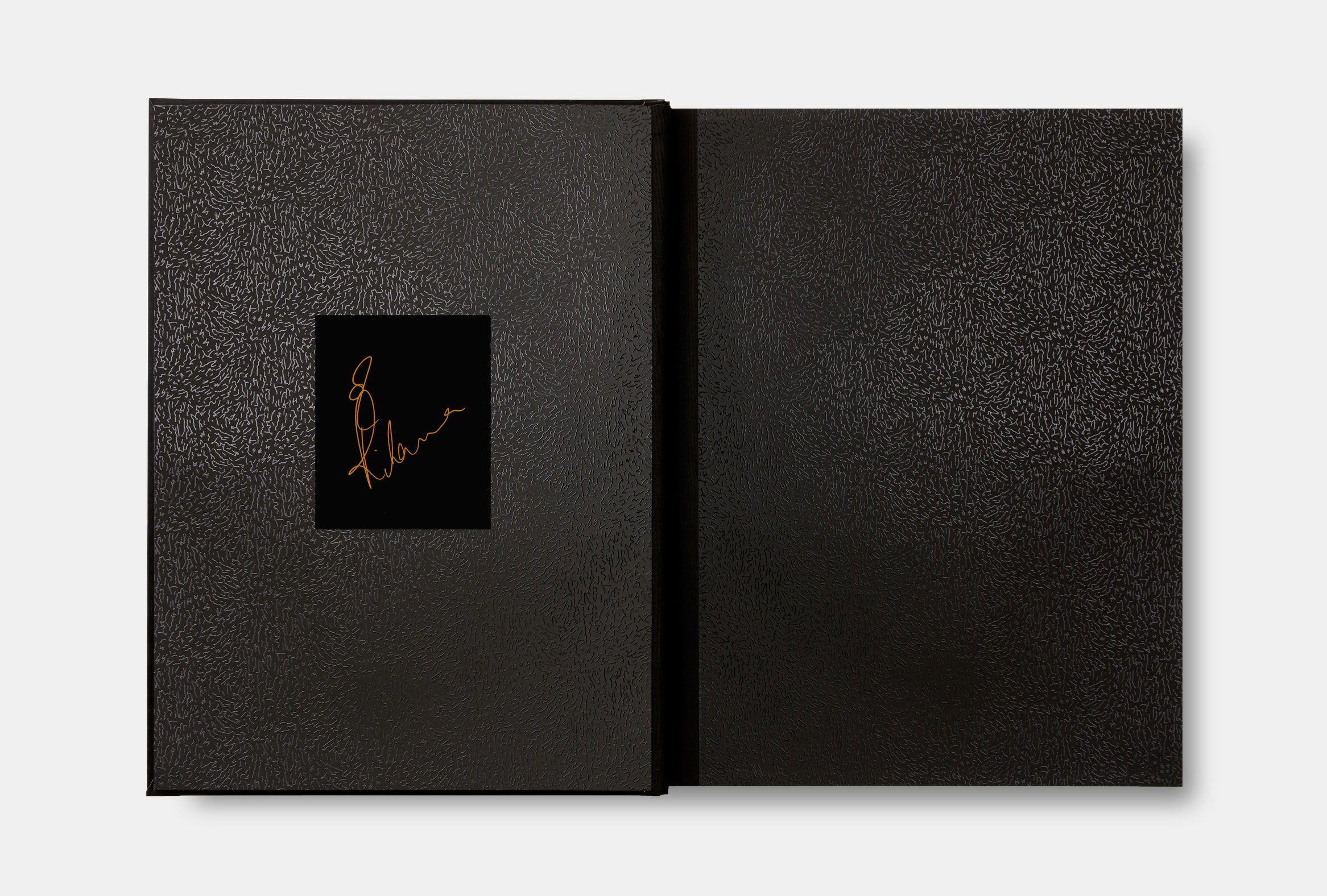 No wonder Rihanna herself has called Love, Rihanna: Luxury Supreme “a piece of art that I am really proud of." And no wonder she hand-signed 500 copies of this new visual biography that showcases intimate photographs of her life as an artist, performer, designer, and entrepreneur.

Sue Medlicott was the production guru we tasked with overseeing the incredibly complex production process needed to bring this oversized luxury format book featuring 504 pages and 1,050 images printed on Zunma paper to life. The project presented her with a number of challenges that necessitated her marshalling Phaidon’s 97 years of book making experience. 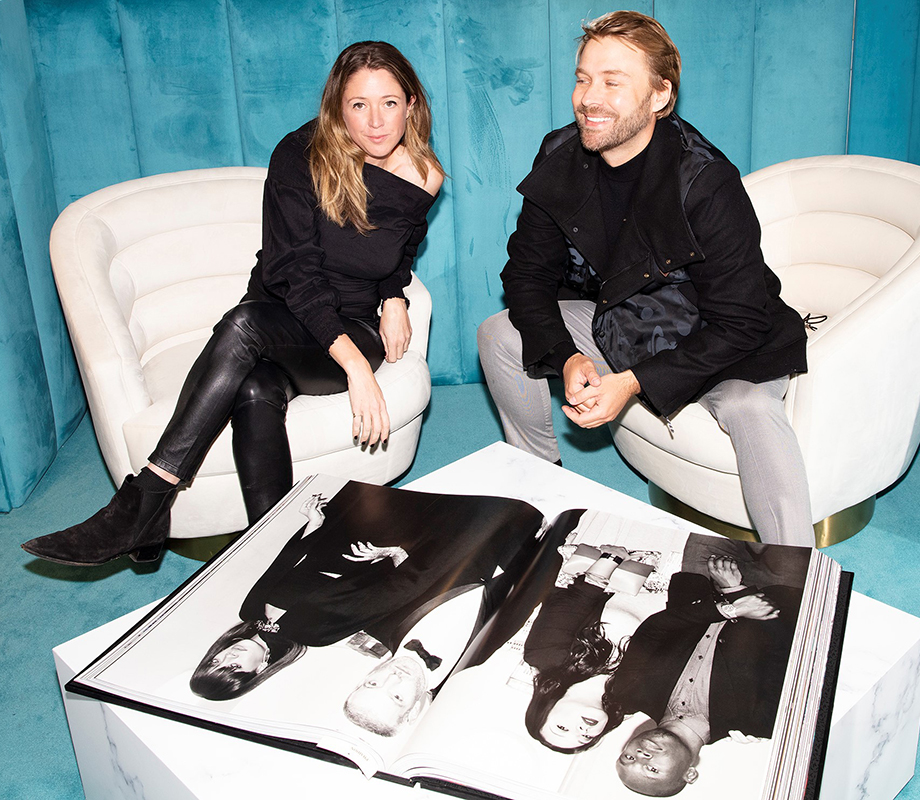 “It takes four or five people working on each book to carry out the various steps: gluing, cleaning, aligning everything to the degree we need. It’s very time consuming. It takes between three and four days to make one book. 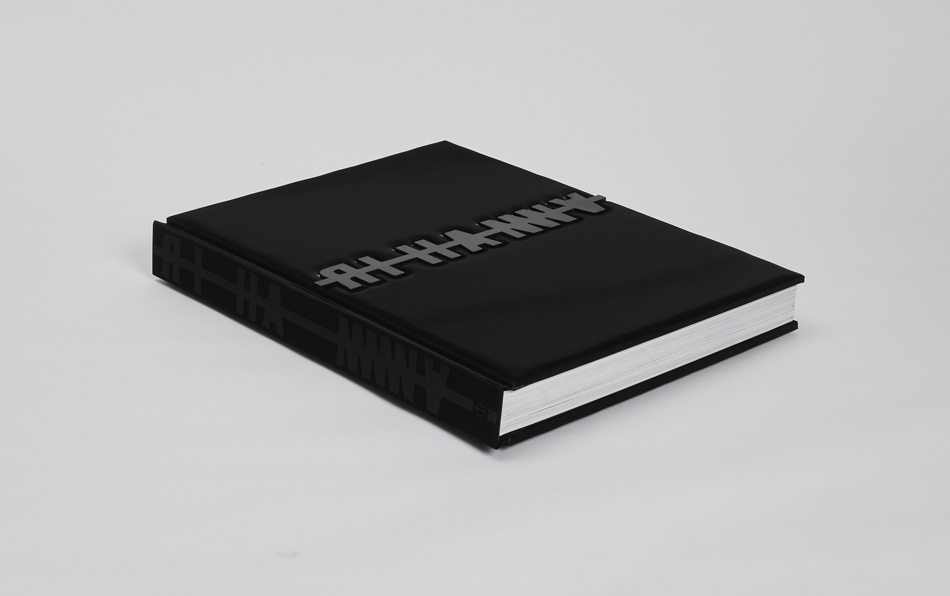 “The cases are large and made out of wood which is an atypical book construction material. The book is then also covered with a very special fabric called Vanta and it has to be handled - literally - with kid gloves.

“This material was actually found by the artists the Haas Brothers who designed the end papers for the book (and the stands for other editions). It’s actually a material used for high end sneakers. When Rihanna saw it she wanted it."

The sheer size of the book and the quality of the paper needed to execute a vision of this magnitude proved both a huge challenge and, in the event, a hugely satisfying win for Sue. 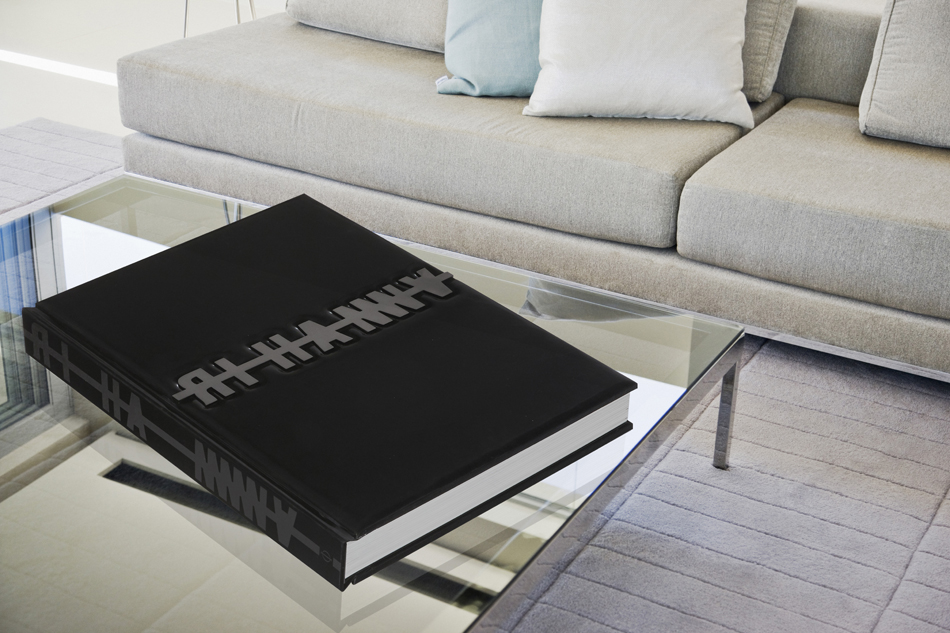 “It’s amazing what happens when you go from a small scale to a very large scale - your whole perception of detail gets changed,” Medlicott says. “You have to use a paper that doesn’t kink but you also don’t want a book that opens up as if it has cardboard pages. So there has to be a beautiful balance of what we call ‘drape’. When you open a book up it should have that beautiful flow. That’s something we had to consider carefully. There are a lot of things going on in terms of bookmaking and all of these things drew on our collective experience of the craft.”

The paper stock was created by the 150-year-old Japanese paper company Oji, and the endpapers used feature a custom design by The Haas Brothers, in spot gloss on a rich, black paper stock.

“One of my favourite parts of the book are the endpapers, which have a print of the vermiculation pattern in clear gloss over black paper,” Simon Haas says. “It shimmers almost like a spider web. And it has Rihanna’s name hidden in it. It's really beautiful. Vermiculation is typically a term used to describe a technique that stone carvers used in Paris on the corners of buildings. The Brooklyn Museum has it too,” Haas says. 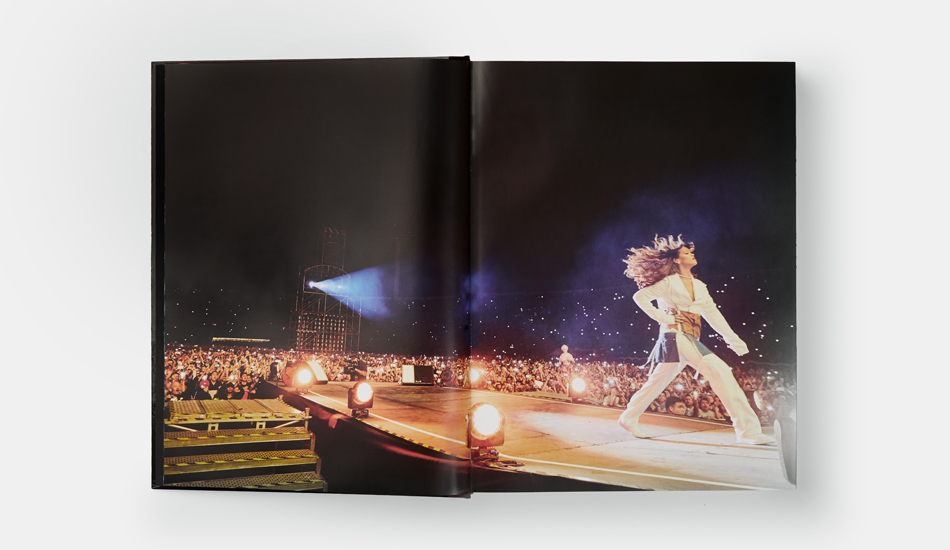 The distinctive typography used throughout the book, which was created by Barnbrook studio in London, is particularly striking when realised in the grill format of the front cover, which, itself went through a number of incarnations before it was ready for production. Barnbrook studio has a peerless reputation for its innovative use of typography and the grill dramatically emphasises the strike-through nature of the typography.

Barnbrook designer Marwan Kabbour told us: “It plays on this idea of what’s been crossed out and what’s not crossed out. Ideas of legibility are also used to play with what we’re trying to say. So a lot of components went into the making of something that looks quite simple but is quite effective.”

“In one way, the line evokes a censorship bar, or the striking out of something. The idea of strike-through text is us playing on the idea of what’s being said versus what is not being said. So it has a conceptual depth to it. It evokes Rihanna’s very energetic attitude and her presence in popular culture.” 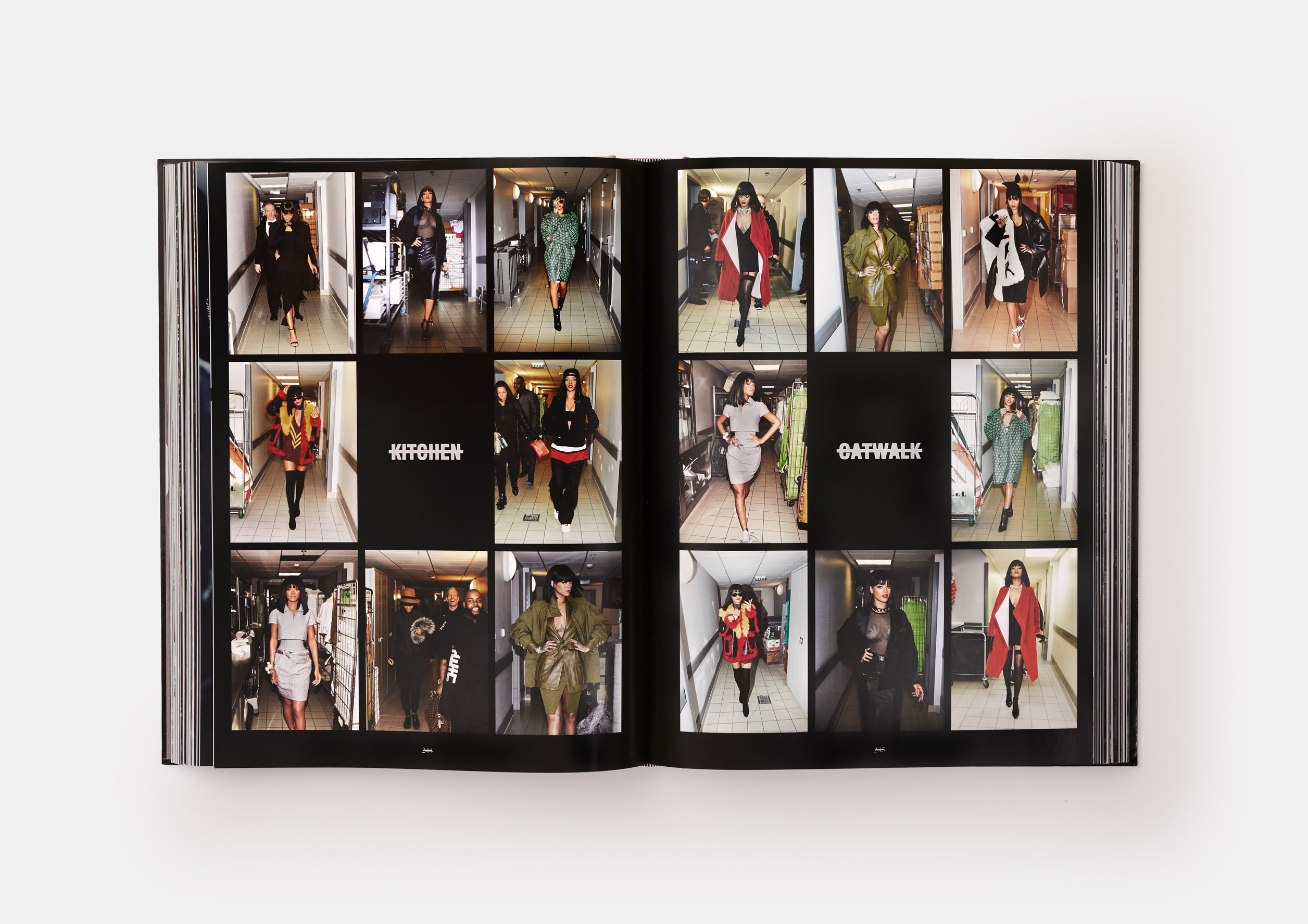 The precise sinking of the grill into the book cover was a particularly welcome challenge for Medlicott and one that provided her with an unexpectedly amusing analogy.

“We carefully prepared a special area under that metal logo so that it would have an appearance that the metal logo was embedded into the cover. We had to do some special laser die cutting of the boards to enable this. It’s like a male/ female part: you cut out the female part and stick ‘the male part’ into it! Absolutely everything had to be made by hand.”

The insides of the book too were also treated to huge amounts of the human touch. The tip-in format was introduced into book publishing in the 1940s but has evolved greatly over the years. The tip-ins for Love Rihanna: Luxury Supreme were printed separately from the main text of the book then glued onto a regular page, or bound along with the other pages. They were printed on a different kind of paper, using a different printing process, and of a different format than the rest of the pages in the book.

“We discussed the kinds of paper with Deb (Aaronson, Phaidon Publisher), Jen O Hill (editor) and Rihanna that would be different and enough of a distinction from the main book,” says Phaidon’s UK Production Manager Adela Corey. “We used slimmer papers and we tested how they would be hand-stitched and hand-stuck into the book. These are printed separately and bound as little leaflets and fixed into the main body of the book by hand. Each insert is slightly different.”

These tip-ins are employed to best effect on the ‘disruptor’ pages throughout the book, introduced to convey the repeat events in Rihanna’s life - such as Grammy appearances -  and are used to break up the flow of the book so that they became 'organic' separators. 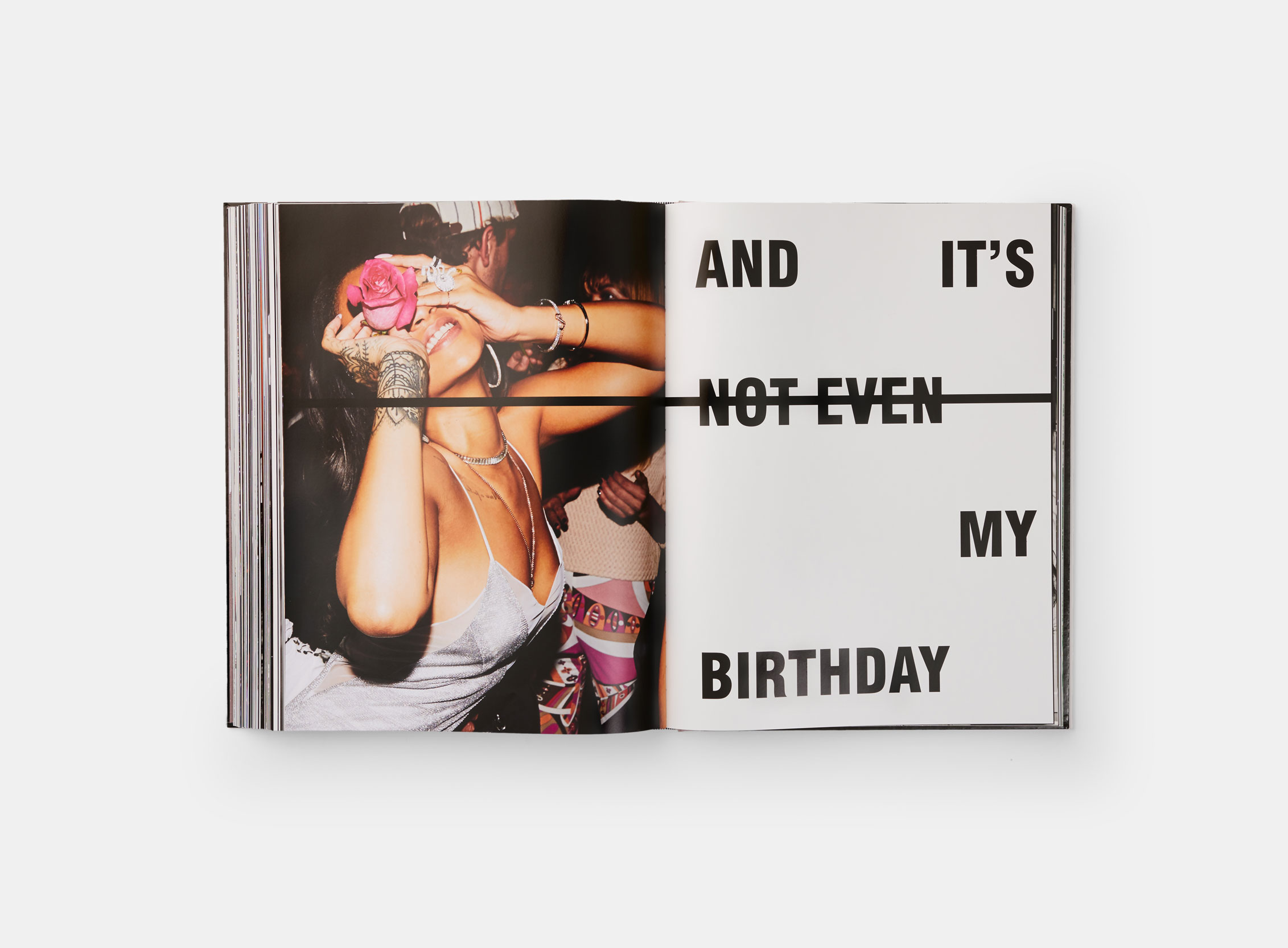 “When I was a kid when I had scrapbooks and I would cut out pictures of singers from magazines and paste them up,” says designer Marwan Kabbour. “Even though I wasn’t really thinking about it at the time, when I was doing these collages it was really like making a fan’s scrapbook. That’s where the inspiration came from to keep things more interesting and provide different visual moments as you’re going through the book."

To complete the handmade, hands on approach of Love, Rihanna: Luxury Supreme the idea of using bookplates featuring Rihanna’s hand signed signature was agreed. The history of book plates can be traced back to Egyptian times, but became more prevalent in 15th century Germany and underwent a renewed interest in the publishing world of the 1950s. The printed numbered book plates were given to Rihanna to hand sign. And the rest, as they say, is about to become publishing history.