Wilhelm Sasnal on migrants, movies and The Cure

The Polish painter and filmmaker describes how pop, existentialism and politics informed his new exhibition

Wilhelm Sasnal has a folder on his computer where he keeps the images he is thinking about painting. But what qualities make him put a picture in it? Not simple beauty, as the artist and filmmaker explained to us this morning. In fact, sometimes it's a sense of anger or outrage, or a feeling of unknowing and mystery, all filtered through his own, rareified sense of culture and history.

Ahead of his new film installation and painting exhibition at Hauser & Wirth Zurich, Sasnal told us how Europe’s migrant crisis has combined with his long-standing love rock of music, as well as his forthcoming feature film, inspired by Albert Camus’ 1942 novel, The Stranger, to inform this new, unsettling show.

So how did you come to make the film that accompanies this set of paintings? The film in the gallery was created during the production of our forthcoming full-length feature film, which I have been doing with my wife Anka. It’s called The Sun, The Sun Blinded Me, and it’s inspired by The Stranger by Albert Camus, which is Anka’s favourite book. During the filming we took some extra shots, with the idea of incorporating this footage into my new painting exhibition. There will be a two-channel projection showing two scenes. The soundtrack is Killing an Arab by The Cure, which is song I’ve loved for a long time and, of course, inspired by the Camus book too. 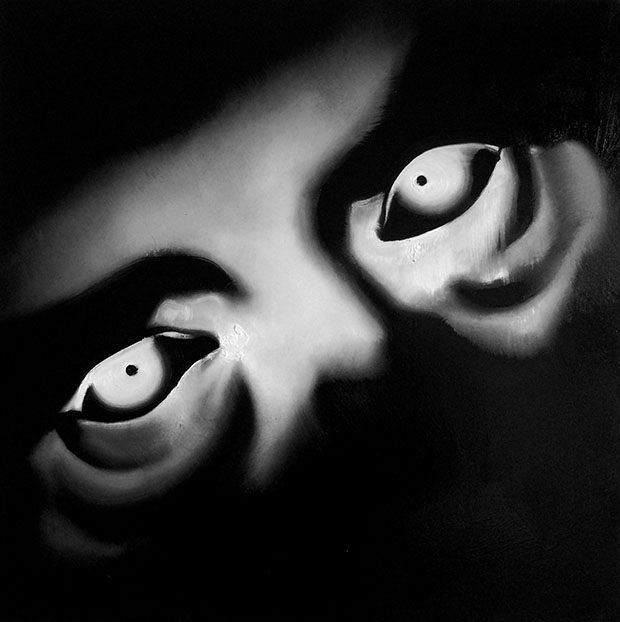 Willing an Arab (2016) by Wilhelm Sasnal. From his forthcoming exhibition

A lot of pictures in the exhibition seem to pick up on this theme of migration and xenophobia. They do. I based a series of paintings on The Cure’s video, which is so strange. It’s not shot on an Algerian beach, but on the English coast in wintertime. I painted three, large-scale images based on this.

It’s hard to look at something like this and not think of Europe’s refugee crisis. Well, we actually started working on the film before the refugee crisis began, about three years ago. Yet we’ve combined current events the film. Poland is a very nationalistic place at the moment, and what some politicians are saying is so shameful.

The first painting that deals with this subject, called Palm Beach, was made back in 2013, and was inspired by some of the earliest pictures of migrants arriving in Lampedusa. There are other less obvious references too. The pile of tyres I painted was from an image I came across while searching for inner tubes, a material someone might make a raft out of. 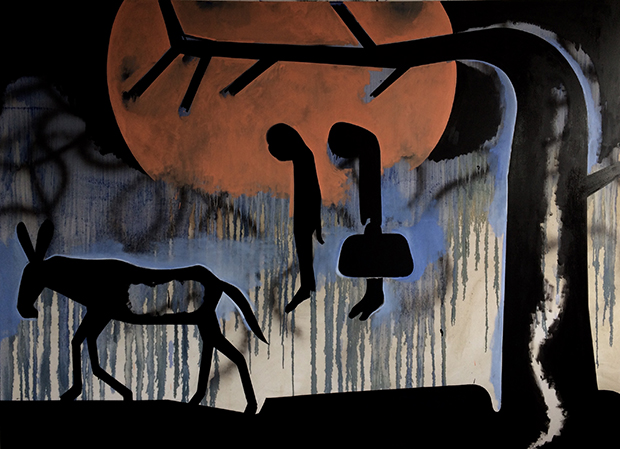 Untitled (2015) by Wilhelm Sasnal. From his forthcoming exhibition

How do you think Europe should respond to the migrants? It’s so complicated, but I think everything has to be done to help these people. We Poles have been emigrating to all sorts of places for many years, not just to survive, but also to improve our economical conditions. I’m very ashamed, as a Polish person, that we are trying to negotiate taking a small number of immigrants. That makes me angry. 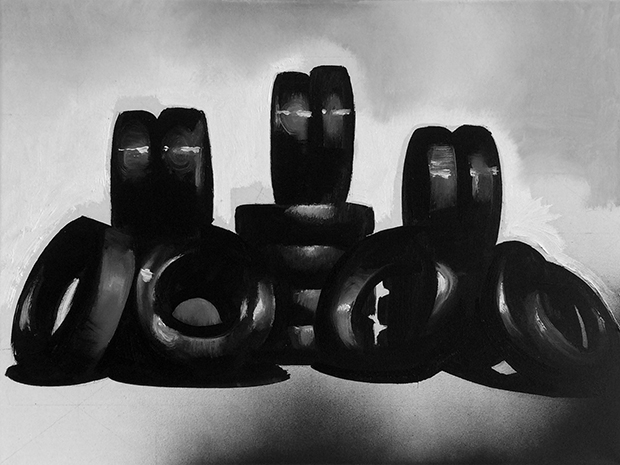 Untitled (2016) by Wilhelm Sasnal. From his forthcoming exhibition

Can you express this in art? It is very difficult. As a concerned citizen, as a man, I should express my opinion, whenever I can. But film is a better medium to express this sort of thing. Painting is very subtle; I don’t believe you can change the world with a painting. 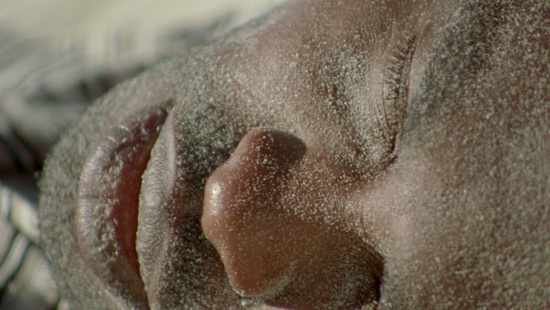 Killing an Arab (films still) (2015) by Wilhelm Sasnal. Taken from his forthcoming exhibition

Is that because films tell stories, which naturally draw to conclusions, while some of the best pictures retain a sense of unknowing? Yes, definitely. Unknowing is something that’s connected to the paintings.  Painting tends to be much more open, and not about answering questions.

How about making beautiful pictures. Is that important? I don’t know if it is a matter of beauty. Sometimes, my paintings aren’t simply attractive. Sometimes I’m so clumsy with the execution of them. But I’m OK with that. Take the linotype print I made of a man in his underpants for the Phaidon limited edition. It’s vulnerable, but vulgar too. Maybe the beauty also contains a certain ugliness, or is ugly in some way. Times change; once beauty was considered crucial for art, but if I could evoke a term, I would say something like mystery. 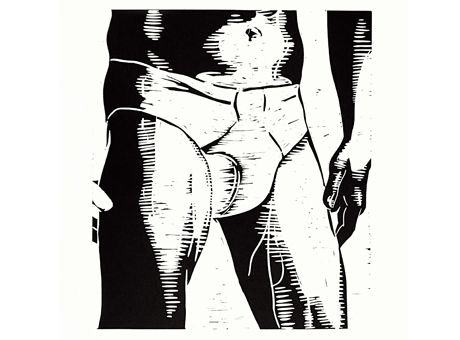 Is that what you look for, when you choose to paint a certain subject? Yes. I’ll Google for images, see something in the newspaper, or find something by total chance. What excites me is a sense of unknowing, a feeling, an anticipation. I put the images I like in folder on my computer. After a while I go back to this image, and, if I still like it, I paint it. Sometimes anger inspires me as well; the picture can be something that I can’t agree with. Painting can relieve a tension I may feel.

One painting is a tribute to the work of the Canadian artist Alex Coleville. What made you include that in the show? I came across his painting in a book, and learned he had inspired many directors, since his paintings have a strong narrative element. I saw a retrospective of his in Canada, and enjoyed it. My picture depicts birds, which are a positive symbol of migration. That’s why I wanted to put this painting in the show. 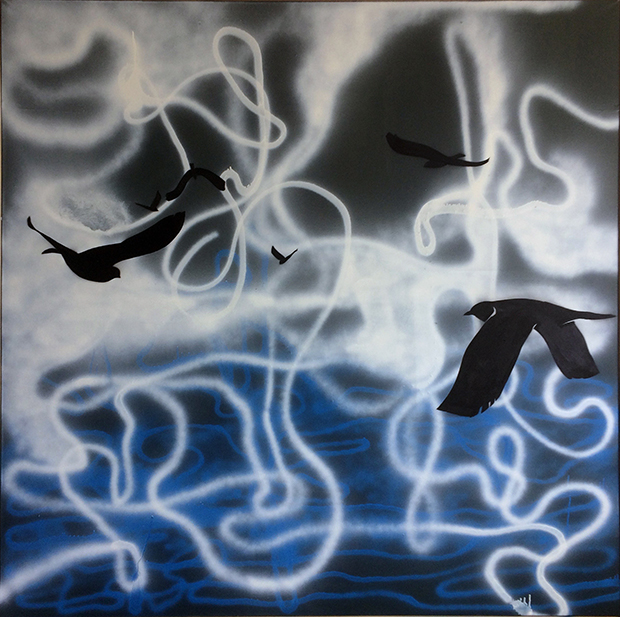 Untitled (after Alex Colville) 2015 by Wilhelm Sasnal. From his forthcoming exhibition

What other subjects are you keen on painting at the moment? I’m a keen cyclist. Yesterday was the first time I was able to take a nice cycle ride with my daughter, after the winter.  After the paintings for this show were shipped to the gallery, I returned to a picture of a bicycle tyre and a pump I painted years ago. I painted another bike picture, from a snapshot I took, to record the size of tube I needed to fix my bike. It wasn’t a great photograph, but after I had taken it, I realised it was very casual. It was not taking on too much meaning. So I painted an image of that. It’s nice to paint objects of things you just, simply like. I’m going to get back into this subject. 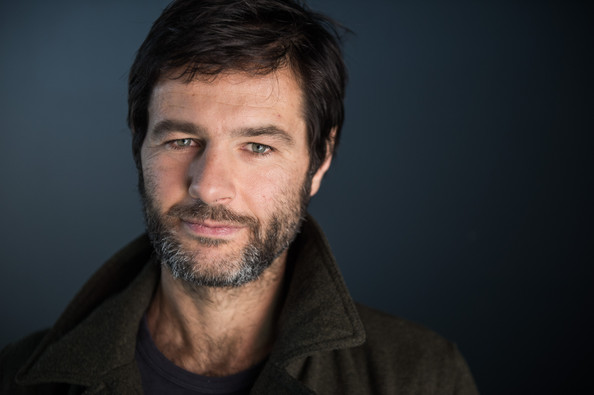 Wilhelm Sasnal’s exhibition is at Hauser & Wirth Zurich 19 March – 21 May 2016. For more go here; for greater insight into this artist, consider our great monograph, and if you want to go further why not buy this Sasnal limited edition linoytype print?

Wilhelm Sasnal is one of the most celebrated artists to emerge from Eastern Europe in the twenty-first century. His practice embraces drawing, film, comics (his strips are regularly published in Machina and Przekroj, two Polish periodicals) and, above all, painting. Prolific, varied and deliberately unclassifiable, Sasnal channels the enigma of our contemporary image-based society. For him, ‘art is largely a mystery [that] touches upon the invisible, the unnamed.’

His painting draws together Pop, photorealism, abstraction, minimalism and photorealism to describe both banal and enchanted details of day-to-day reality, placing diverse subjects on a plane of equality. His key subjects, however, which he returns to again and again, are the possibilities and limits of representation. In his work, material and image swap places, crossing and recrossing the border between depiction and abstraction, often several times in a single canvas.

His work in every medium involves a process of absorbing, saturating, materializing and then moving on to the next subject. At any given moment he has a pile of images waiting in his studio and in his head. In his exhibitions, we catch excerpts or glimpses of the greater whole of his attempt to create an encyclopaedia of the visual world, a project in which no detail is insignificant.

His films show a similar range to his paintings, from their modest beginnings as unedited 8-millimetre shorts to the 35-millimetre feature film Fallout (2010). Seen as a whole, his practice raises fundamental and evergreen questions about the value of images and art, the nature and possibilities of painting and film, the intertwined relation of our subjectivity to cultural identity, and the ways we address what we experience in life in parallel to the mediated world of images.

Sasnal was awarded the Vincent Van Gogh Prize in 2006, and his work has been the subject of solo exhibitions at major museums across Europe, including the Kunsthalle Zurich, the Frankfurter Kunstverein and the Museum van Hedendaagse Kunst (MuHKA) in Antwerp. An exhibition of his work will open at London's Whitechapel Gallery in October 2011.

Dominic Eichler is an art critic, artist, musician and curator based in Berlin. He is Contributing Editor at Frieze and has written for a range of magazines and exhibition catalogues. His books include the poetry collection Written All Over Us (2009).

Andrzej Przywara is a curator, critic and art historian. He began working at Foksal Gallery in 1988, curating exhibitions by such artists as Luc Tuymans, Franz West and Douglas Gordon. He is currently President of the Foksal Gallery Foundation, which he co-founded in 2001.

Jörg Heiser is a critic and curator based in Berlin. Co-Editor of Frieze, he also writes for a number of German-language newspapers, including Süddeutsche Zietung, and his books include All of a Sudden: Things that Matter in Contemporary Art (2008).

'The boldest, best executed, and most far-reaching publishing project devoted to contemporary art. These books will revolutionize the way contemporary art is presented and written about.' (Artforum)

'The combination of intelligent analysis, personal insight, useful facts and plentiful pictures is a superb format invaluable for specialists but also interesting for casual readers, it makes these books a must for the library of anyone who cares about contemporary art.' (Time Out)

'A unique series of informative monographs on individual artists.' (The Sunday Times)

'Gives the reader the impression of a personal encounter with the artists. Apart from the writing which is lucid and illuminating, it is undoubtedly the wealth of lavish illustrations which makes looking at these books a satisfying entertainment.' (The Art Book)