Scientists and cannibals, Mike Kelley and Francisco Goya; a serene landscape which on further inspection turns out to be just copy of the wallpaper patterns from a five-star hotel, and three blurry, smart-phone-style portraits which, the artist reveals, are versions of portraits by the Great Scottish Enlightenment painter Henry Raeburn. Luc Tuymans' new exhibition, Shore, which opens at the David Zwirner gallery today and runs until 2 April, is an uneasy, tricksy affair.

In a way, it confirms our description of the venerable painter, as published in The Art Book. “By creating a subtle distance between the painting and the perceived objective accuracy of photographs, the artist questions the role of images in shaping histories and our formation of memories.” 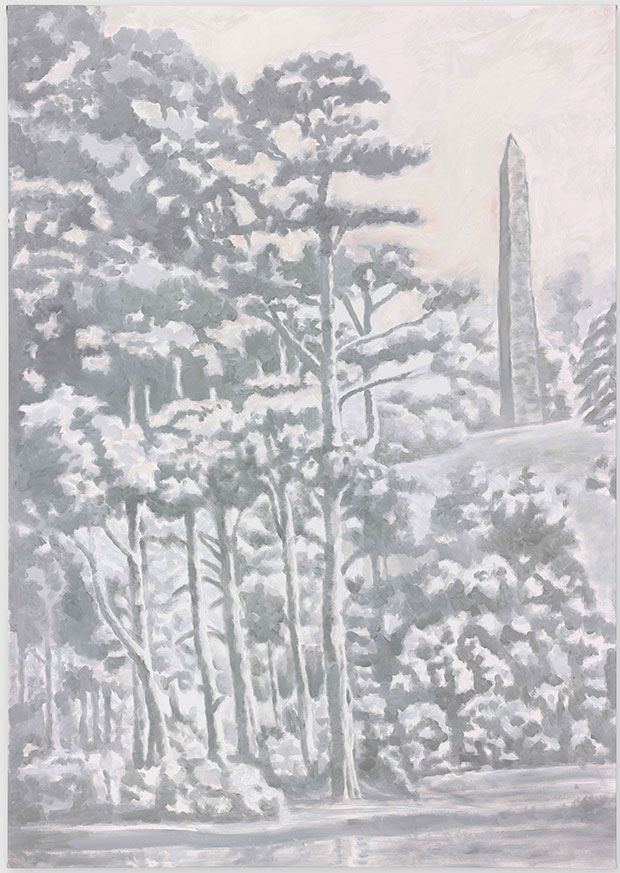 Indeed, during his private tour of the new exhibition yesterday afternoon, Tuymans himself more or less concurred. His exhibitions, he said, were “not always that straightforward,” adding that this wasn't a simple thematic show. However, he did describe two distinct moods.

The images on the ground floor, Tuymans said, deal with the ideas of status, sadness and domesticity. There are three portraits, the painter's own versions of late-eighteenth and early-nineteenth century works by Henry Raeburn, an artist whom Tuymans has admired for most of his adult life. These are accompanied by two soft, washed-out landscapes that mimic the wallpaper designs Tuymans came across during a stay at the Balmoral hotel in Edinburgh. Finally, there's a painting of a fireplace, which is based on a picture Tuymans took of the scrappy, cheap class hearth that formed part of an installation by the late American artist Mike Kelley.

Above, on the gallery's first floor, the mood is one of 'disquiet', with a dark movie-scene image, the show's titular Shore painting, which is in part inspired by Goya's darker paintings and the murder videos of ISIS. Across from this is a portrait of the Japanese cannibal Issei Sagawa. Read on to hear Tuymans himself describing the works on show during a walkaround yesterday. 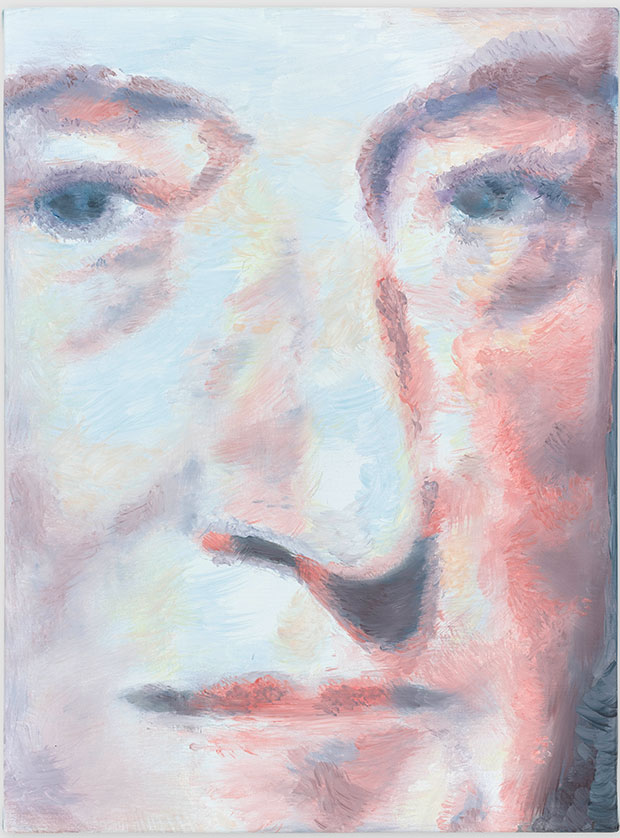 “The Henry Raeburn images come from the University of Edinburgh, where I’m actually going to do a big show this November. I'm interested in the Scottish Enlightenment; nearly six Scottish people wrote the American Constitution, including the line about the pursuit of happiness. Andrew Carnegie even said that without the Scottish the United States would be a poorer deal. Now, all we’re left with now is, of course, James Bond.

“I photographed these portraits with my iPhone, then I printed them out. Then I rephotographed them and blew them up. So, the whites become blues – you see blues going through all the portraits; it's nearly abstract. Still, I had to paint the blurriness, so things are extremely sharp. What was so interesting was they become like contemporary images. Painting is a modus operandi that works through time, with time." 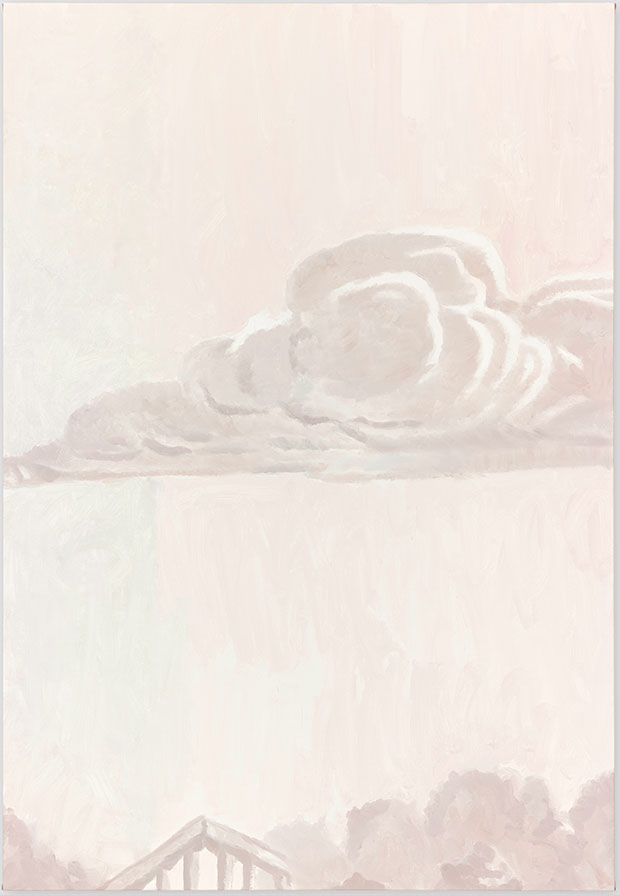 “These portraits are juxtaposed with things that I actually sat in. I twice stayed in the Hotel Balmoral. When I had tea, I sat in this enormous place. The wallpaper there has a cloud on it that looks like a croissant. There’s a bit of joke in this; you think my work isn’t funny, but it is." 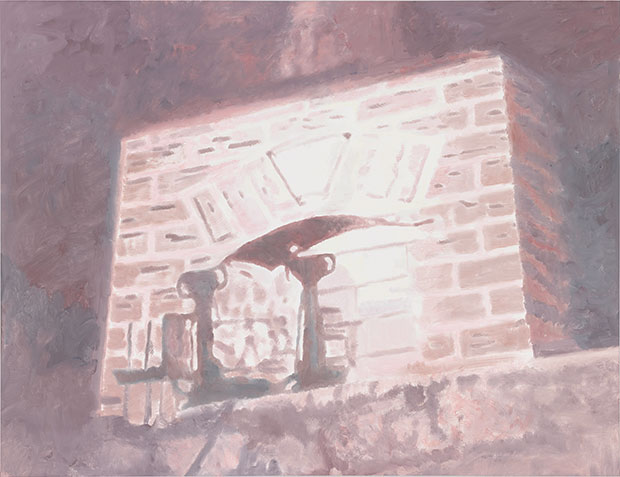 “This one directly deals with domesticity. It is based on a very old installation by the late Mike Kelley. It was actually in a warehouse in New York.” 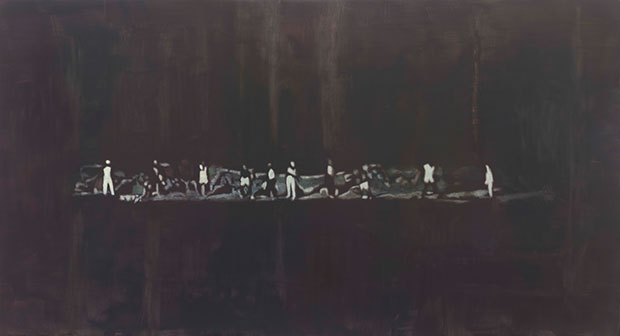 "This is one of the darkest paintings, if not the darkest that I've ever created. It's something I’ve always wanted to do, to make a dark painting. None of the paint is black, because I don’t use black. It is a combination of indigo, violet and green, in order to give it density. It was made in the opposite mode to which I usually work. I usually paint light works, which get progressively darker, but here I went immediately to the dark, and with some Kleenex took out the figures, and painted them in.

"In part, it's inspired by Goya. Last year my wife and I were in Madrid, in the Prado looking Goya’s pinturas negras [black paintings]. I'm getting more and more interested in Goya as I get older, because I’m beginning to see that Goya is a very Old Master on the brink of modernity. In a sense he’s an annoyed painter, because he was totally isolated, because the Enlightenment stopped at the Pyrenees.

"Anyway, I was looking for imagery that I could put into this painting, and by accident I came upon this old British film called A Twist of Sand [see video below; the image appears within the first 30 seconds]. This scene is at the very beginning. At first you see a guy coming out, a blob with a flag, trying to surrender. Then, the next image is what you see in this painting. Then the figures all get shot.

"In a way, it's a contemporary image. If you think of the imagery you see, of ISIS and so on, it's often a lot of masked men, in black and white. That informed this imagery in a sense." 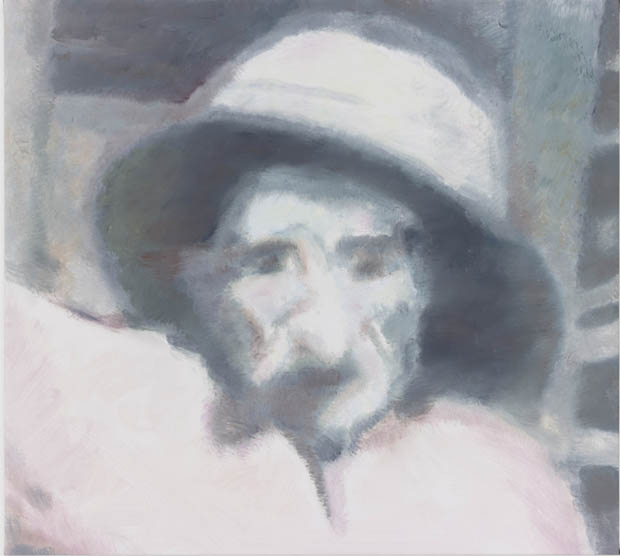 "This is a portrait of the man who killed and ate a Dutch student in Paris in 1981. He was expedited back to Japan, but he was never actually tried. He wrote a book, and he became a cult figure - that made him quite popular in a way. I have painted him three times now. There’s a whole documentary about the guy; part of the film asks what could have triggered this cannibalism. Then there this little piece of film where he and his brothers play a game where they try to put one another into a pot and boil them. At that point in the film you see a little kid with a mask and a tropical helmet on. It is the epitome of a scary image."

For more on the new exhibition, go here. Meanwhile, for greater insight into this important artist’s life and work consider our monograph, and our longer examination, Is It Safe?