798 Art Zone to undergo redevelopment, including Cirque du Soleil-style theatre - what will happen to the artists?

Beijing's 798 art district, to the east of the centre, is a great place to see how the Soviet-era city became the capital of the world's second largest economy.

This former factory complex was built by East Germany during the 1950s in a Bauhaus style. Producing military equipment throughout The Cold War, the production lines went into decline towards the end of the 1980s, before being revived as art studios and galleries in the 1990s. It's now home to a plethora of fine-art concerns, from Chinese outposts of well-known international galleries, such as Pace, as well as notable Beijing institutions, like the Long March gallery. 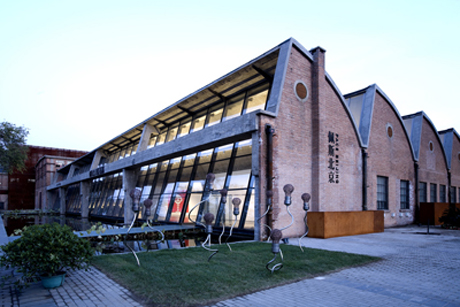 Many of the industrial buildings are still standing, and the community has learned to love their old factories; aesthetically, the area has as much in common with London's Shoreditch or New York's Williamsburg as it has with downtown Beijing.

However, this could be set to change if the local government's plans go ahead. The Art Newspaper reports news of a Rmb50bn (£5bn, $8bn) makeover, converting 798 into "an upscale luxury and cultural area."

"Bungalows in the art district now will be replaced by skyscrapers," says project general manager Wang Jianjun. The development, designed by I.M. Pei’s son Li Chung Pei, will also include an upmarket hotel and apartment complex, as well as an "aquatic theatre", The House of Dancing Water. This last addition, a Cirque du Soleil-style attraction, is already a hit in China's gambling mecca, Macau.

Those hankering after sleek new skyscrapers and Las Vegas-style entertainment, will likely give thanks but others, more interested in contemporary art, should make the most of 798 while they can. Work is due to begin in early 2013. If you plan to go remember to take this.

'Packed with insider info on the world’s coolest hotels, restaurants, and attraction'’
Vogue