The rising outsider artists to watch

As outsider art showcase, The Museum of Everything, sets up shop in London’s luxury fashion cathedral Selfridges, positioning itself firmly at the centre of consumer culture, we thought it would be a good moment to take a look at some other outsider artists who’ve caught our eye. A brief explanation: outsider artists not only exist removed from the art establishment, they very often inhabit the periphery of society, their work frequently symptomatic of a personal situation or condition that’s positioned them there, such as abuse, disability, mental illness and or often poverty. The art itself obviously takes myriad forms but recurring themes are paranoia, alienation and escapism.

Melvin Way from South Carolina produces dense algorhythms and formulas from letters, numbers, phrases, and symbols with the intricacy of a satellite view Google Map. Making sense only to him, the mystifying, tangled, non-linear representations of secret codes and formulas offer the viewer a sense of Way’s qualia. In a similar vein, Kunizo Matsumoto’s work – diligent annotation in ink – is just a souvenir of the artist’s compulsive note jotting about the art he likes in pads, sketchbooks and calendars, written in both Japanese characters and his own invented shorthand.

Meanwhile, painter Patrick Joyce, from Somerset, UK, has been dubbed Patrick the incurable optimist in a nationwide advertising campaign promoting his intention to paint 100 portraits before motor neurone disease prevents him from doing any more. His subjects include Professor Stephen Hawking. Australian Peter Hughes’s arresting primary-coloured social commentaries feature emotive painted captions such as, "Because he did a senseless thing to do while he has got no self control while he has been getting too upset."

And Kenya Hanley – the New York-based artist obsessively paints cupcakes, ice creams and other sweet confectionary in a wallpaper-like repetition of prints with an endearing imperfect clumsiness in the lines and a joyous use of colour. They’re bright and arresting and, not surprisingly, available to buy in the Selfridges exhibition. 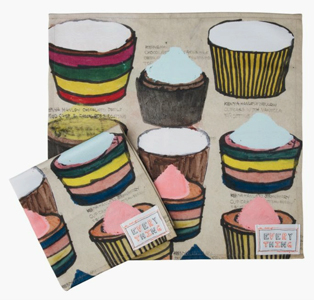 One of Kenya Hanley's cupcake designs

A global survey of drawing today featuring over 100 contemporary artists

Vitamin D offers a fresh and pioneering overview of the current state and underlying significance of drawing as an artistic medium. It highlights the originality and innovation with which contemporary artists in the genre - from across the world and in a vast variety of contexts - experiment with a diversity of styles and statements.

Vitamin D features the work of 109 contemporary artists, selected by some of the world's foremost critics and curators for their unique outlook. It is in itself an artistic compilation of the endless possibilities that drawing offers an artist from any background.

This book is a captivating composition of examples of the evolution of drawing in the twenty-first century. It reveals the energy of contemporary drawing, in a subtle presentation of the richness and versatility of the medium. With several pages dedicated to images of each artist's work and a deeply analytical parallel text, Vitamin D is at once a detailed reference book for art world aficianados and an absorbing introduction for newcomers to the scene.

Highly informative and aesthetically stimulating, this book is an essential work in its own right, through its exposition of just how fundamental an artistic medium drawing continues to be.

Emma Dexter has been Director of Visual Arts at the British Council since 2014. Prior to that, she was Exhibitions Director at Timothy Taylor Gallery London, and was a Senior Curator at Tate Modern, London from 2000 to 2007. There she curated retrospective exhibitions by Frida Kahlo and Luc Tuymans, major exhibitions by Pierre Huyghe and Bruce Nauman, and co-curated Tate's first ever dedicated photography exhibition 'Cruel and Tender' in 2003. In 2004 she curated 'Pin Up: Contemporary Collage and Drawing' at Tate Modern, having earlier curated 'Surfacing' an international survey of drawing at London's ICA where she was Director of Exhibitions.

"Big, sexy, gorgeously produced... A great introduction to 109 new worlds made intimate through the innate qualities of drawing." —Royal Academy of Arts magazine

"Handsomely produced... The quality of the work is extraordinarily high." —Times Literary Supplement