Monkfish wrapped in pancetta might sound like haute cuisine, but The River Cafe Look Book makes it easy

The River Cafe Look Book is the first cookbook from London’s world-famous restaurant written with beginner cooks and children in mind. Its authors, the River Cafe’s co-founder Ruth Rogers and its current head chefs Sian Wyn Owen and Joseph Trivelli, don’t overly simplify their food to suit this readership; these (easily executed) dishes in the book closely reflect some of their most popular menu items. However, they do offer young and inexperienced cooks some useful tips.

In the book’s section marked ‘Begin’, the authors advise home cooks to wash their hands, read the recipes twice before starting work on them, and even place damp kitchen cloth under their chopping boards, to prevent it from sliding. 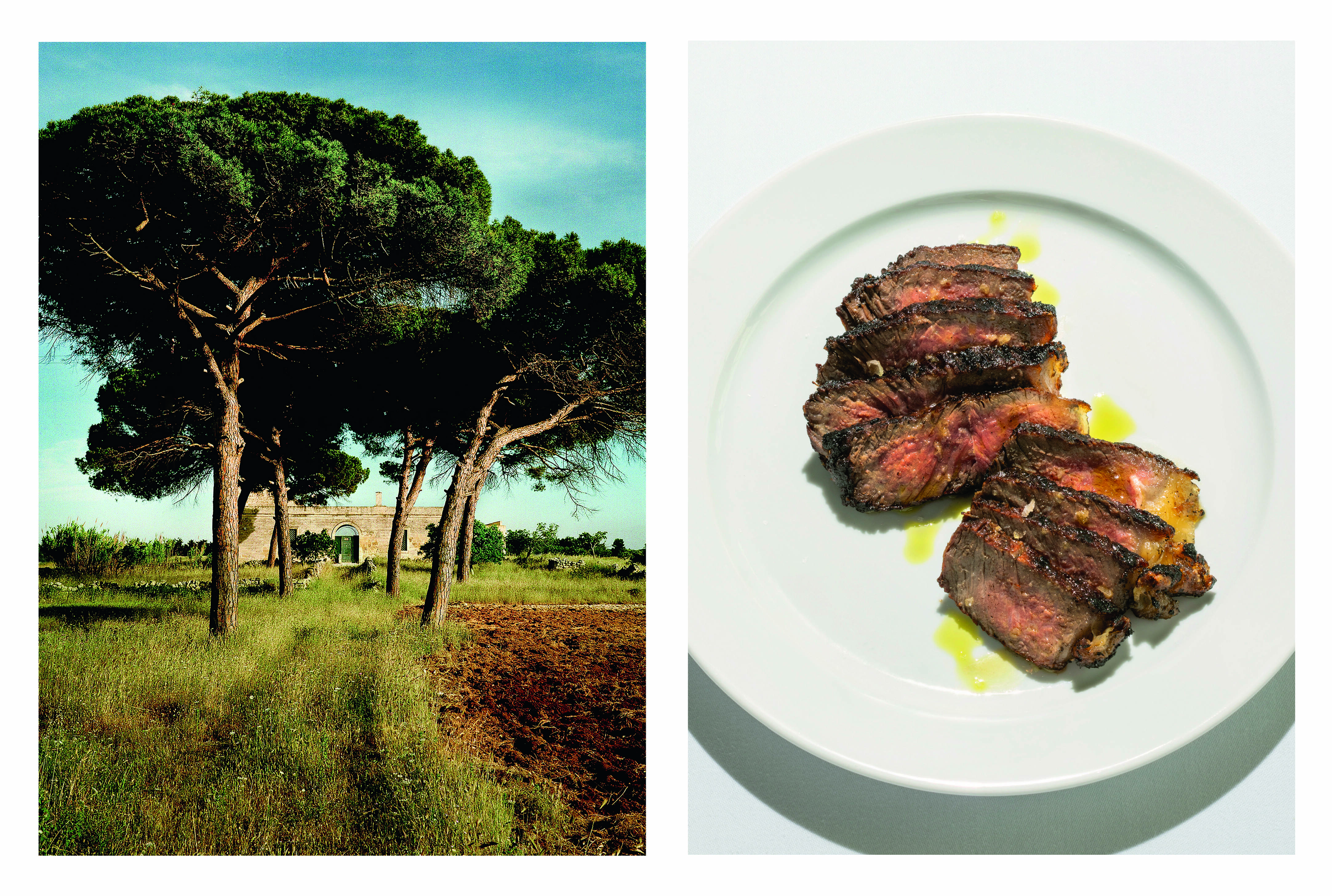 One of The River Cafe Look Book's striking visual spreads

They also pique readers’ visual interest, via a series of toothsome photographic pairings. The opening spreads of the book feature pin-sharp depictions of the finished dishes, accompanied by an equally beautiful, though somewhat unrelated accompanying photograph. These shots, taken by the British photographer Matthew Donaldson, are intended to spur on the imagination and creativity of cooks; as the authors put it, “cooking is more than just science, rigorous and measured.”

A shot of beaten lamb cutlets is accompanied by a close-up of burnt match heads; pappa al pomodoro sits beside a orange-red sunset seen through an aeroplane window; and monkfish wrapped in pancetta is accompanied by a jolly, ceramic unicorn, with a ripe peach squashed onto its horn. 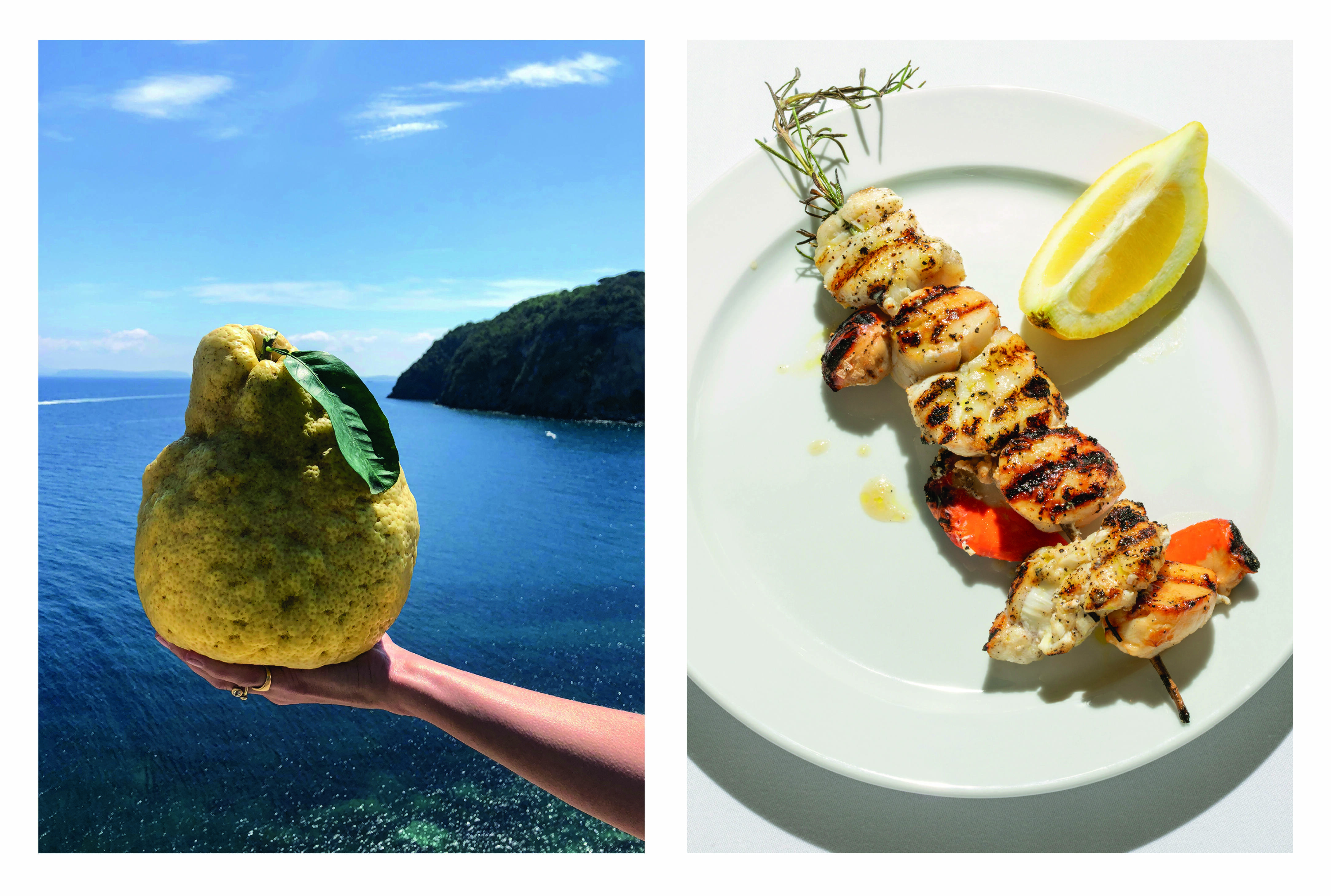 One of The River Cafe Look Book's striking visual spreads

They’re all fun, engaging combinations, which accompany the easy-to-follow recipes perfectly. By way of introduction to that monkfish and pancetta recipe, the chefs advise cooks not to “wrap the parcels too tightly. Before you put the parcels in the oven, it is important to sear them in a hot pan so that they don’t stick.”

Got that? Then this is what you need to make this dish. Gather 4 (160g/5 3⁄4-oz) portions monkfish tail, deboned (boned) and skinned; sea salt and freshly ground black pepper; 16 thin slices of pancetta; a sprig of rosemary, leaves picked; three tablespoons extra-virgin olive oil; and two lemons, cut into wedges.

Lay the monkfish portion on top of the pancetta and use the baking paper to wrap the pancetta around the fish. Remove the paper. Tuck a few rosemary leaves into the pancetta. Repeat for the other three pieces of monkfish.

Heat the olive oil in a large ovenproof frying pan. Add the wrapped monkfish, seam side up. Sear for 1 minute over a high heat, then turn over with tongs. Put the pan in the oven and roast for 10 minutes. When cooked, the flesh of the fish should be white throughout. Carefully remove from the oven and serve each portion with juices from the pan spooned over.

That wasn’t so hard, was it? For greater detail, and lots of other dishes besides, order a copy of The River Cafe Look Book here.

The first cookbook from London's iconic River Cafe written with beginner cooks and children in mind - a collection of more than 50 delicious and easily achievable recipes, including a host of River Cafe classics that have been specially adapted for new cooks

This highly anticipated cookbook is more accessible than any other to have come from the kitchen of Ruth Rogers' legendary Michelin-star restaurant The River Cafe, set on the banks of the Thames in London.

With more than 50 iconic recipes, each of which has been masterfully adapted and revised by the River Cafe chefs specifically for those new to cooking, the fabulous dishes in this collection bring the warmth, beauty, and sumptuous ease of Italian family home-cooking to cooks of all levels of kitchen expertise - including your kids!

The vivid and playful pages of this witty and innovative book showcase garden-fresh meals such as Smashed Broad Bean Bruschetta, Fusilli Zucchini, and Raspberry Sorbet, along with new versions of River Cafe classics, including a delectable lemon tart, a luxurious chocolate torte, and tasty pesto.

The intriguing and inspirational images that open this book encourage readers to connect the food they will cook with the world around them in new and sometimes surprising ways. Part look-book, part cookbook, this sure-fire bestseller encourages kids of all ages to connect with food and achieve great results - with The River Cafe as their teacher and inspirational guide.

Award-winning chef and bestselling cookbook author Ruth Rogers CBE launched the River Cafe in London alongside Rose Gray in 1987. Since then, it has trained many superstar chefs in its kitchens and won multiple awards, including a Michelin star.

Co-head chefs Sian Wyn Owen and Joseph Trivelli have each worked at London's River Cafe for over 20 years. Both chefs have written for the River Cafe's bestselling cookbooks.

This risotto is a great, kid-friendly introduction to Italian cookery