The great American artist Jenny Holzer's text-based works often begs the viewer to ask: just who is speaking here? Is this the voice of an adman? A comic? A teacher, a torturer even? Just who is doing the talking here? Holzer's genius is in analysing the power of language in disembodied, glowing texts via a whole host of differing personae.  In 1990 Holzer became the first ever woman to represent the United States at the Venice Biennale, where she won the Golden Lion for the best artist.

Holzer's famous Truisms - such as "Abuse of Power Comes as No Surprise," the piece "Protect Me from What I Want," and the words inscribed on this sculpture, "Money Creates Taste" - have since appeared across the world in many guises: as electronic tickertapes, etched into marble, printed on cash register receipts, on human appendages and on benches, baseball caps and even condoms. Her work is also featured on a 65-foot wide wall of light in the lobby of 7 World Trade Center.

By experimenting with the use of words visually displayed in public spaces, Holzer is able to stimulate public discussions about violence, sexuality, oppression, human rights, feminism, power, war, and death. 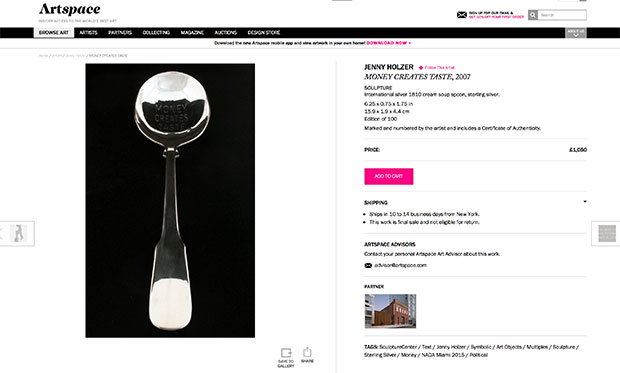 Buying art on Artspace is easy

Until 1993, she wrote her own texts, after which she began to appropriate texts by Polish Nobel laureate Wislawa Szymborska and other champions of human rights, including Elfriede Jelinek, Fadhil Al-Azawi, Yehuda Amichai, and Mahmoud Darwish. Standout works include I Was in Baghdad Ochre Fade (2007), a series of oil on linen transcriptions of torture documents from the Iraq War; Redaction Paintings (2009), which were created using recently released classified memos with texts blacked out by censors; and an installation in the lobby of 7 World Trade Center.

Now you can buy your own Jenny Holzer piece from the great art website Artspace. Our Affordable on Artspace work today is Holzer's Money Creates Taste, a work that questions consumerist impulses. Holzer inscribes the title on the curving part of the spoon in a word play that's representative of her famous pithy social judgments. The legend itself, Money Creates Taste, is engraved on an International sterling silver 1810 cream soup spoon. It measures 6.25 x 0.75 x 1.75 inches (15.9 x 1.9 x 4.4 cms) and is an edition of 100. The spoon is marked and numbered by the artist and includes a Certificate of Authenticity.