As the art market enjoyed some of it's highest prices ever this year - some people just refused to pay and others were made to.

Jeffrey Gundlach, the Californian bond trader whose LA home was burgled back in September, offered a $1.7 million reward for the return of his lost artworks, which included pieces by Piet Mondrian, Jasper Johns, Richard Diebenkorn, as well as a Porsche Carrera, and expensive wines and watches. The works were recovered later that month, following a tip-off. However, Gundlach himself helped investigators, by suggesting they check who had googled his late grandmother's name: Helen Fuchs. Fuchs was an amateur painter, and a couple of her works were stolen during the raid. As luck would have it, two searches had been made - one by Gundlach and one by the thieves.

31-year-old New Jersey wine sommelier, Mark Lugo, was sentenced to three years in jail, after pleading guilty to taking a 1917 work by the French early Modernist painter Fernand Legerin from a New York hotel back in June 2011, and a 1965 Picasso drawing from a gallery in San Francisco in July of the same year. When police raided Lugo's apartment in Hoboken, NJ, they found a further work by Picasso, as well as stolen fine wine worth $6,000 (£3,600). "He had a nice little gallery going on" said Det. Sgt. Edwin Pantoja of the local police department.

This 1949 drawing by Salvador Dali was stolen from the newly opened Venus Over Manhattan gallery in New York, on 19 June this year. Though the thief was caught on CCTV, he was never apprehended, though the work was recovered, thanks to the anonymous thief posting it back to the gallery later that month.

Moore's bronze sculpture, valued at £500,000 was taken from the grounds of an English museum on 10 July. On 20 July, following a public appeal, the work was recovered and returned to the gallery, by a scrap metal dealer, who had bought the work from two local men for £46. 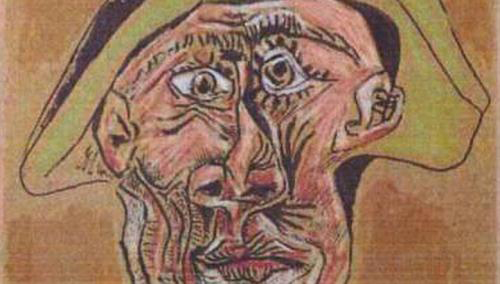 2012's largest art theft was taken during an overnight burglary (15 -16 October) at the Kunsthal Museum in Rotterdam. Experts put the value of the artwork, all of which was owned by the Cordia family, on of The Netherlands' richest collectors, at around £100m.

Though the museum had no guards on site, its alarm system was high quality and functioning. The police arrived within five minutes of the alarm being sounded, yet no thieves were apprehended, nor were any works recovered. It's every museum director's worst nightmare," Kunsthal director Emily Ansenk told the Associated Press.

While the price in scrap of Moore's sculpture was minor in comparison to its market value, a the insured value of Turner-Prize winner Douglas Gordon's 2007 work, The Left Hand and the Right Hand Have Abandoned One Another, is near enough half its scrap value. The sculpture, of two life-sized hands cast in yellow gold, was insured for £500,000 when it went missing from Christie's London storage facility back in November, yet Gordon told the Guardian that the gold alone is worth around £250,000. I don't think this is an art theft," he told the paper. "I'm pretty sure it has been melted down."

On Friday 30 November, at around 2pm, a man in his late middle age walked into the Schmit art gallery on rue Saint-Honore in Paris, and took this work by the French Romantic painter, currently valued at around $780,000 (£480,000). It's still missing.

Winner of the Illustrated Book of the Year award in 1994, the first edition of the The Art Book has been an outstanding success and has become a well-known landmark in the art book world.

Now published in over 20 different languages and in mini, midi, and hardback formats, The Art Book has received rave reviews from numerous newspapers and magazines and has made many appearances on the bestseller lists.

The Art Book New Edition presents 100 new artists, including for the first time Photographers and Performance Artists. Following the successful format of the original the new edition is an A-Z guide to 600 great artists from medieval to modern times, it debunks art-historical classifications by throwing together brilliant examples of all periods, schools, visions and techniques.

Each artist is represented by a full-page colour plate of a definitive work, accompanied by explanatory and illuminating information on the image and its creator. Glossaries of artistic movements and technical terms are included, making this a valuable work of reference as well as a feast for the eyes.

By breaking with traditional classifications, The Art Book represents a fresh and original approach to art: an unparalleled visual sourcebook and a celebration of our rich and multi-faceted culture. Specifications: